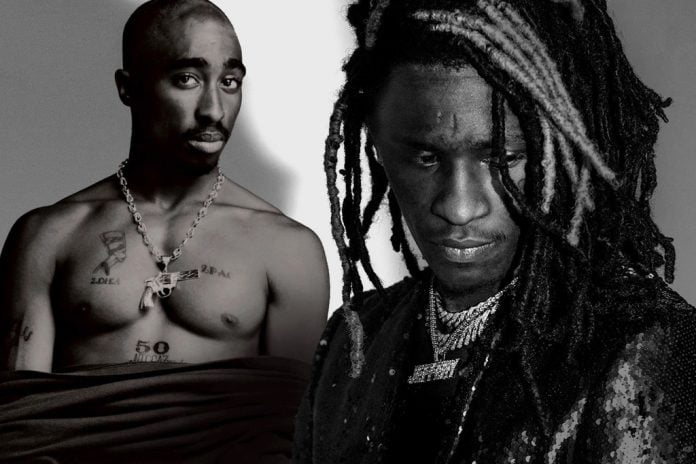 Young Thug Says 2Pac is His ‘Teacher’, Talk About His New Album ‘So Much Fun’

Recently, Young Thug had an interview with The Fader and shared with its fans a lot of exciting info. He teased that the follow-up to his album ‘So Much Fun’ will soon be available, and it will be something unexpected. The young performer did not reveal much, but he did say that his new album Punk will be ‘touching’ and self-analyzing.

In a different interview with Rolling Stone, Thug told his fans that his new project won’t be about fun, which was the case with ‘So Much Fun’, as its name hints. Punk will be a story about ‘real-life’, something that everyone can relate to. The rapper also hinted that the songs on Punk are influenced from 2Pac, and added that this is probably his favorite album up until now.

The famous song-writer shared that he finds Tupac to be one of the best rappers in the world, and the fact that he rapped about life can only be an inspiration to all new performers. Young Thug also mentioned his conversation with JAY-Z, in which they both agreed Tupac was and still is ‘a teacher’ to all young performers.

There is no release date confirmed for the record yet, but from what we heard, it will surely be impressive. According to the young rapper’s words, Punk will also be more lyrical than his previous album.

In his interview, Young Thug also added some details on the ‘J. Cole’ matter. To the question, if J.Cole was indeed the executive producer to his last album- ‘So Much Fun’, Thug did not answer straight and said that Cole will have to answer that for himself. He also elaborated that there are a lot of forms he has to sign, and such information cannot be shared that easily.

Delray Richardson With New Details About The Night Tupac & Nas...

R-Truth Speaks On Meeting Tupac For The First Time

Def Jam To Release Posthumous DMX Album ‘Exodus’ On May, 28

2PacLegacy Staff - Modified date: May 12, 2021 0
Def Jam Recordings has announced that the first posthumous DMX album 'Exodus' will be released on May, 28. The news for the new album by...