A native of Los Angeles, Mike Miller is widely known for his iconic images chronicling the rise of the West Coast hip hop scene and he worked with some of the most iconic 90’s supermodels, photographed hundreds of major-label album covers from all genres of music from Tupac, Nick Cave to Herb Albert. Recently photographed and directed  A$AP Rocky, Drake, Kendrick Lamar, YG and Jeezy.

In 1994, Tupac Shakur was photographed with both middle fingers up as part of the rapper’s iconic Thug Life: Vol.1 album cover shoot. The man behind the camera? Photographer Mike Miller. Mike grew up in 1970s Los Angeles, and spent much of his early adulthood religiously listening to KDAY, America’s first 24-hour hip hop radio station. After graduating from UCLA, moving to Europe and working on a number of major fashion campaigns, Mike returned to his hometown to chronicle the rise of the West Coast hip hop scene. His remarkable body of work is currently on display in M+B Gallery’s California Love until 3 November 2018.

“California Love presents a compilation of my photography from the past 29 years,” Mike tells It’s Nice That. “M+B Gallery, my wife Shannon and I sat down together to brainstorm the exhibition’s theme: California Love. It reflects my appreciation for all that Cali has offered me.” Mike’s portfolio is a love letter to 1990s LA. From late-night shots of strip clubs with names like Crazy Horse to dead-pan images of New Temple Missionary Baptist churches, Mike’s photography has immortalised the city, time and culture that gave birth to West Coast rap. Most notable, however, are Mike’s photographs of the legendary rappers themselves, including a timeless low-angle shot of Eazy-E posing next to an American flag post, and a portrait of Tupac showing off his famous Thug Life tattoo.

“My photographs encompass California’s whole vibe as experienced through my eyes,” Mike says. “I have such an overwhelming amount of photographs, it was difficult to narrow them down. But we decided to keep it concentrated on music and some historic landscapes.” The photographer’s work is a celebration of one of the music industry’s most defining moments. Yet, Mike’s photographs also document a group of America’s most important social critics. The music of Tupac Shakur and Eazy-E shines a light on police brutality, systemic racism and the government’s repeated mistreatment of African Americans. Mike’s California Love is an important reminder that their lyrics continue to be just as relevant over 20 years on.

Miller grew up on the Westside, attending Santa Monica public schools. His teen years were impeccably timed, growing up in the early days of punk and hip hop. He went on to graduate from UCLA in the mid-1980s and decamped for Europe, ending up in Paris, where he briefly made ends meet by painting houses. While in Europe, super model Linda Evangelista gave him his first camera, a Nikon F2 passed on from Peter Lindberg. Miller began photographing in earnest and quickly proved gifted for the craft. Within months he was traveling across Europe to shoot campaigns for Cacharel and other major fashion houses.

When Miller returned home to L.A., his fashion work caught the eye of record labels such as EMI and by the late 1980s, he was shooting artists as varied as girl rockers The Go-Go’s and Heart, to jazz players such as Stan Getz and Herb Alpert. Miller, however, grew up a hip-hop fan, listening to 1580 AM, KDAY, the first 24-hour hip-hop station in the country. In 1989, he snapped his first rap-related cover, for the original N.W.A. group member, Arabian Prince along with his debut solo album. This was the beginning of Miller’s long history of shooting the key figures on the West Coast rap scene, thoroughly compiled in his monograph West Coast Hip-Hop and the subject of his in-progress documentary about the influence of this region’s hip-hop culture on the rest of the world.

Mike Miller (b. 1964) lives and works in Los Angeles. His work has been included in recent exhibitions at The New York Public Library and The Oakland Museum of California and has been acquired by the by the collections of the Smithsonian, Getty Museum and the Rock and Roll Hall of Fame, among others.

Mike Miller: ‘‘Tupac shot w me a few times. My wife @lovewestcoast styled his wardrobe and picked locations all over LA. Talking w a fan at the @annenbergspace for the @contacthigh exhibit he tripped that I brought #pac to these dangerous locations in #southcentral #eastla #elysianpark and #hooverstreet”

Mike Miller: ”This guy had a work ethic that is rare🐐he showed up on time and took direction. No problem. Only thing he said no to was a building that homeless had taken over and the smell was too intense😓one of the easiest people I’ve worked with.”

Mike Miller: ”Thuglife I shot Tupac all over east and south LA. This spot has totally been gentrified. We lasted only 20 min there before we got a warning🔫 bounced to the next spot📷#mikemillerphoto #tupac #tupactuesday #tupacshakur #oldlosangeles #losangeles #elysianpark” 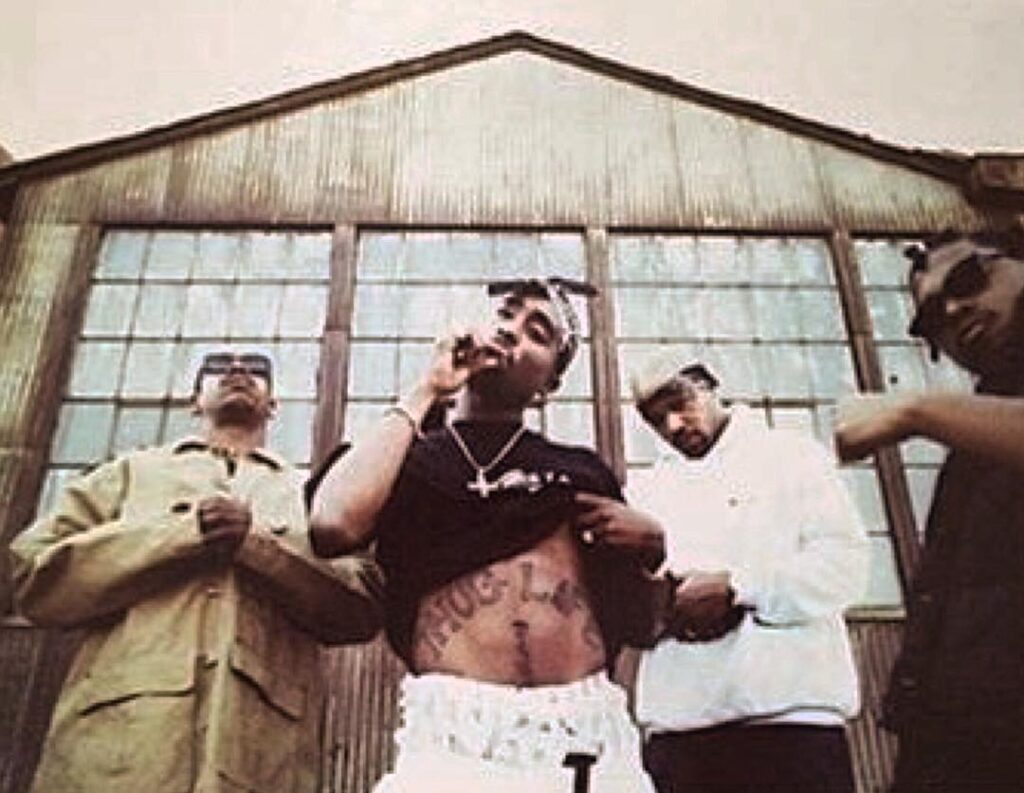