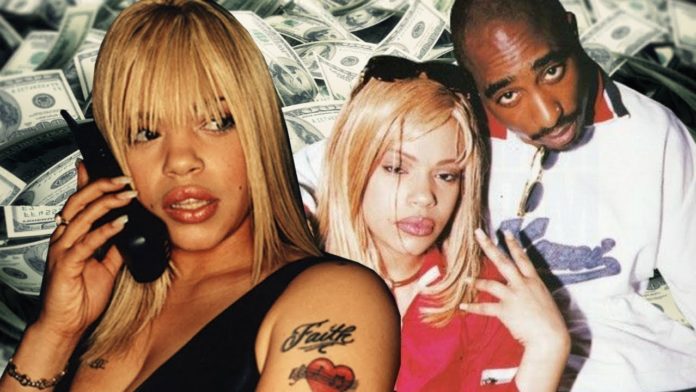 In recent series of YouTube uploads the platinum songwriter Delray Richardson explains how Faith Evans omitted the fact that she hung out and partied with Tupac Shakur at the “Waiting To Exhale” soundtrack release party on November 14th, 1995. 26 days after she had sex with Tupac.

Evans would later claim after Tupac’s death that he violated her in his hotel suite on October 19th, 1995 by saying that she had to perform a sexual favor to receive her payment after recording the song “You Wonder Why They Call You B****“. These new facts ultimately prove it was all a publicity stunt and lie to sell Evans book and documentary “Hopelessly In Love” using Tupac’s name.

This time photos, dates, and an interview with Tupac Shakur by Chuck Philips perhaps proves that Faith Evans lied about Tupac.

According to Faith Evans, she stated on Lifetime’s ‘Hopelessly In Love‘, that Tupac wouldn’t give her $25,000 that was owed to her for recording a song with him. Faith stated that Tupac asked her to perform oral sex at a hotel in exchange for the $25,000.

According to Richardson, Evans lied, pointing that the Tupac recording session she participating in took place after the ‘Waiting To Exhale’ movie release party.

As shown by Delray, Chuck Philips interview Tupac while he was in the studio with Faith Evans. The two artists were recording for the song ‘Wonda Why They Call U B____‘. As heard clearly by Chuck Philips that interview took place on October 19, 1995. The ‘Waiting To Exhale’ movie release party took place after the recording session on November 14, 1995, not before as Faith Evans claims.

Richardson points a photo showing Pac and Faith. Tupac’s arm around her and she doesn’t look bothered at all. The photo is taken nearly a month after the day Evans claims Tupac asked her to do oral sex.

Check out the full interview of Delray bringing out the lies on the surface.