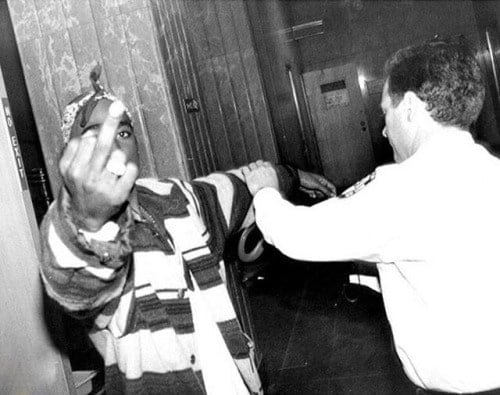 I. Tupac was brutally assulted by a police officers

On Octomber 17, 1991 Tupac was brutally assulted by a police officers Boyovich and Rodgers for jaywalking across the street. He asked why it look two officers to stop him for jaywalking. After all. had a high rate of serious crime. Jaywalking didn’t seem like that big of a deal. Finally, Tupac lost his temper and swore at the officers. They put him in a choke hold and knocked him to the sidewalk. ”I woke up cuffed up, with my face in the gutter with gang of people watching me like I was the criminal,” he recalled.

Tupac filed a $10-million civil suit against the Oakland Police Department, alleging that the police brutally beat him for jaywalking. Tupac received approximately $43,000 in settlement money, much of which went to pay his lawyer.

On November 01, 1993, Charges Filed Against Tupac For Shooting Two off Duty Police Officers In Atlanta, GA. 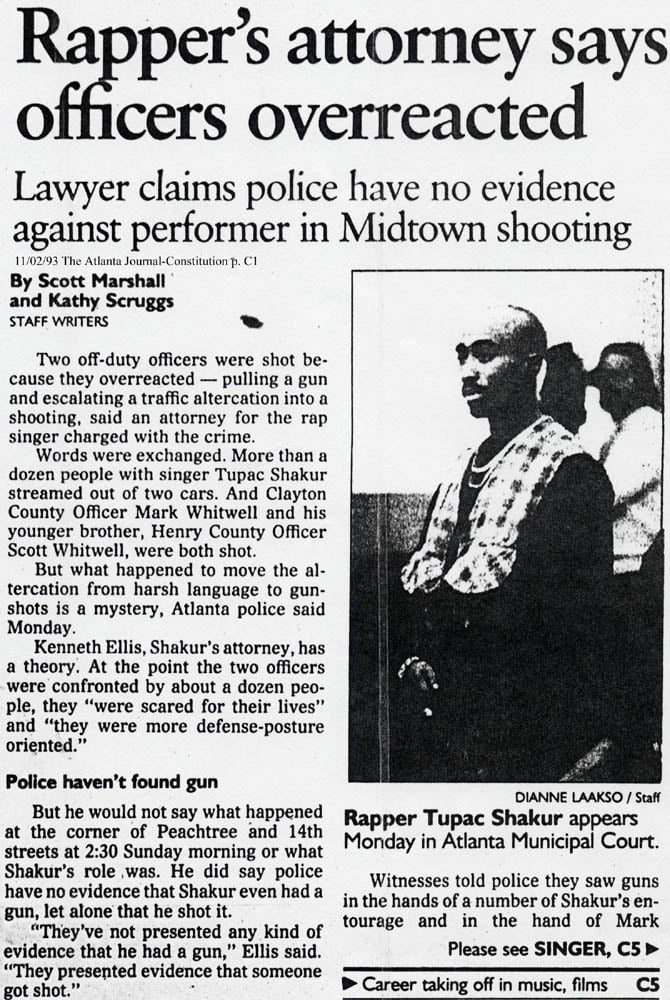 Tupac attends a hearing in Atlanta on charges of shooting two off-duty police officers . 2Pac and Mark Whitwell, one of the police officers, are both bound over Fulton County Superior Court on aggravated assault charges.

February 10, 1994: Tupac is sentenced to fifteen days in a Los Angeles jail for punching out director Allen Hughes. (Hughes and his brother, Albert, had dropped Tupac from Menace II Society.) 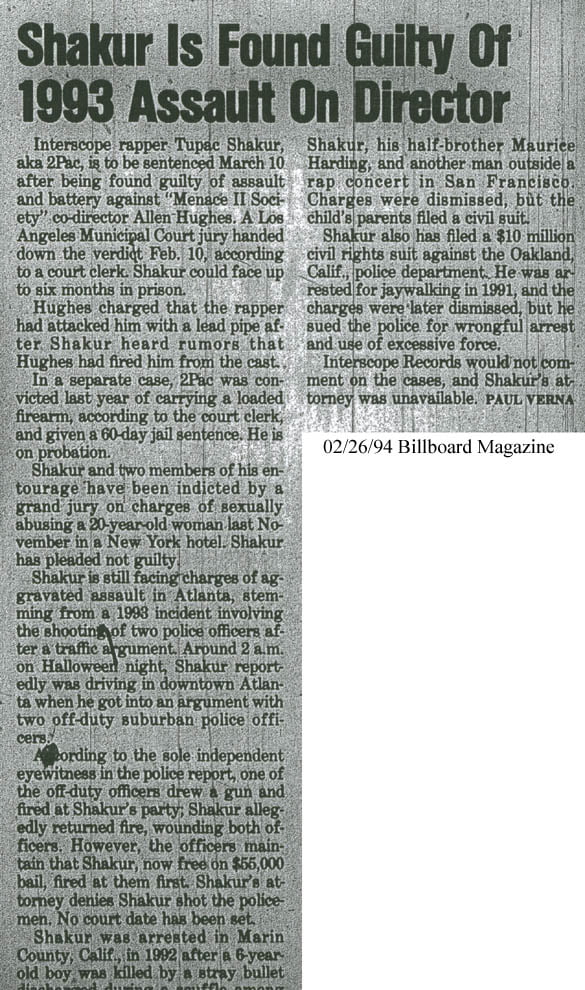 On May 10, 1994, Tupac attends a court hearing in Los Angeles Municipal County Court and begins serving his 15 day sentence in a Los Angeles jail for assaulting Allen Hughes. As a result of the misdemeanor assault and battery conviction, Shakur is also required to report to a Caltrans work crew. He has yet to comply.

“Your honor, I don’t know anything about the South side of Chicago or Cabrini Green projects. I never tried to explain my temper by telling you stories about my childhood, poverty, the plight of Black people or even rappers. I work hard and I have a lot to contribute to my community. And I can best do that by being on the streets, not behind bars. I got into a fist fight with a grown man and I’m willing to accept responsibility for my actions. But I’m not the monster she wants you believe I am.”

Judge Wu sentences Pac to 15 days in LA County, a sentence that is, as he points out, relatively moderate. The sentence is suspended and Pac is to report to the jail at 9 a.m. on May 10th.
Reporters rush outside the courtroom to tape the statement Pac promised them.

Tupac, 23 at the time, pleaded quilty n Wednesday, September 14, 1994, to a misdemeanor in exchange for prosecutors dropping felony assault charges. He returned for sentencing on Wednesday, Octomber 26. He could have gotten up to 90 days in the East Lansing jail. Instead, he was sentenced to, and served, 10 days in jail, and ordered to perform 35 hours of communaty service.

November 28, 1994 Tupac’s trial continues in New York. After exiting the courtroom, he is interviewed by NY-1, to whom he states, “I went through this and I ain’t blow my brains out like Kurt Cobain.”

On the 29th November 1994, a Manhattan jury had convened to deliberate charges of sodomy, sexual abuse, and weapons possession against Tupac, 23, and his codefendant, Charles Fuller, 24. They stood accused of molesting a 19-year-old woman in Tupac’s $750-a-night, 38th-floor Parker Meridien Hotel suite on November 18, 1993. After the first day of deliberations, Tupac left for a publicity stop in Harlem, then went on to Times Square’s Quad Recording Studio to record a track with Uptown Records’ Little Shawn. Facing a maximum 25-year sentence, Tupac knew it might be his last recording session for some time.

Tupac Shakur was ambushed by three black men in the lobby of a recording studio in Times Square in New York City. The men robbed him of over $35,000 in cash and jewelry and shot him five times – hitting his head, groin and hand.

XII. Tupac made a surprise appearance in the Manhattan courtroom, December 01, 1994

On December 01, 1994, Tupac made a surprise appearance in the Manhattan courtroom where his fate was being decided. He was wheeled in by Nation of Islam bodyguards, his charmed Rolex that the robbers didnt take on his right wrist, his left wrist wrapped in gauze, and his bandaged head and leg covered by a wool-knit Yankees hat and a black Nike warm-up suit.

On December 05, 1994, Tupac misses a hearing in Manhattan due to health concerns, the hearing is rescheuled for nine days later.

On December 14, 1994, Tupac missed a second hearing in Manhattan. The judge issuse a one week stay on his warrant after Tupac’s personal physician states that moving him could be dangerous. 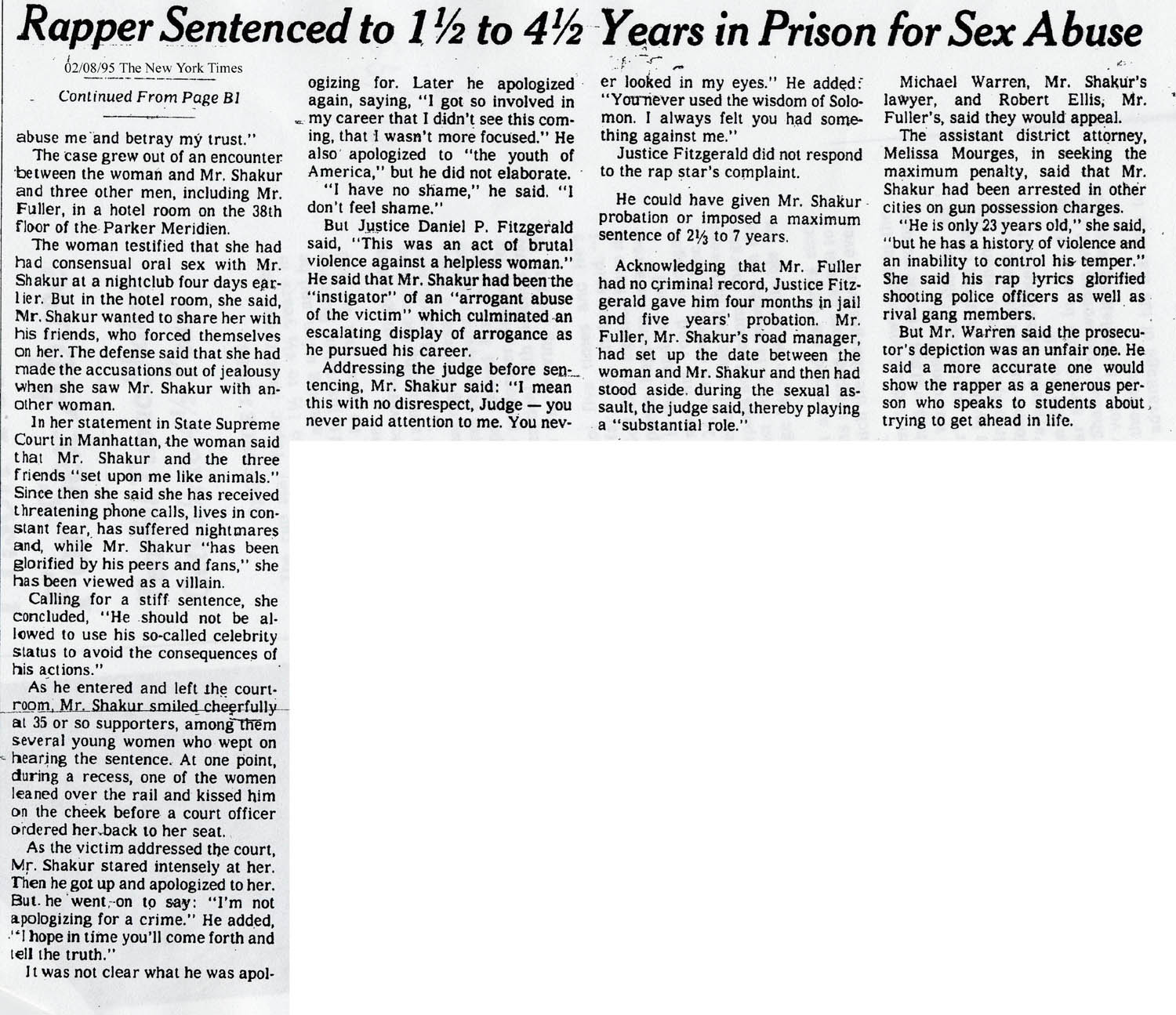 On February 07, 1995, Tupac was sentenced to one-and-a-half to four-and-a-half years in prison for sexually abusing a fan, and he tearfully apologized to his victim. But even as he apologized, he said that he had committed no crime.

Addressing Judge Fitzgerald before sentencing, Tupac virtually accused him and the court system of racism. “You never looked into my eyes. You never used the wisdom of Solomon. I always felt you had something against me.”

Then, in an about-face, he addressed the youth of America. “I got so involved in my career that I didn’t see this coming. I have no shame, I don’t feel shame.” This statement received a positive response from the many fans in attendance. At one point, a sheriff had to order a young woman back to her seat after she leaned over the railing and kissed the rap star on the cheek.

Justice Fitzgerald then addressed Shakur, “This was an act of brutal violence against a helpless woman.” And with that he sentenced Shakur to 18 months to four and one-half years in prison. Noting that Fuller had no criminal record and that Shakur had been the instigator of the attack, Fitzgerald sentenced Fuller to four months in jail and five years probation.

XIV. On April 04, 1995, Tupac is served with a lawsuit filed by Mark Whitwell for damages caused by the October, 1993 shooting in Atlanta, GA.

XVI. On July 24, 1995, The New York Appellate Division splits a vote 3-2 in the matter of granting Tupac bail. The vote goes in favor of granting Tupac’s bail, but the District Attorney filed an appeal immediately after the vote, meaning that Tupac had to remain incarcerated in the Clinton State Prison in Dannemora, NY.

XVII. On October 19, 1995, seven days after Tupac was released from prison, he divorces Keisha Morris.

XVIII. On November 07, 1995, the wrongful death lawsuit against Tupac for the fatal shooting of a 6-year-old Marin City, Calif., boy has been settled after the testimony of just two witnesses.

Tupac’s lawyer, Dennis Cunningham called the gunshots “legitimate,” saying Harding had fired above the heads of the crowd after being attacked. As for the rapper’s instruction to “get the gun,” Cunningham said, “Whatever Shakur said was in the heat of the moment.”

Cunningham added that the boy’s death was “a ridiculous thing to have happened,” but said, “It is painful for me to think that the mother had nothing but money on her mind” in filing the lawsuit.

Tupac did not attend the trial.