2PacLegacy.net collected all police records. Through them you can fully understand the difficult moments of Tupac’s life.

Tupac Shakur: “I Didn’t Have A Police Record Until I Made A Record”

On August 22, 1992, in Marin City, California, Tupac rapped at an outdoor festival, and stayed for an hour signing autographs and pictures. Some earlier negative remarks made by Tupac about Marin City had caught up and when arguments started, voices got loud; he pulled a .380 ACP, cocked it, fumbled and it fell. He shouted “Get the gun!” to his brother Mopreme, who shot three to six times.

Though nobody in the crowd was shot, about 100 yards away, 6-year old Qa’id Walker-Teal rode a bicycle at a schoolyard and was hit in the forehead, the bullet killing him. Tupac and Mopreme left in their car and were stopped by an angry mob, by chance, in front of a sheriff’s substation. The police “rescued” and took the two into custody, who were released without charge. 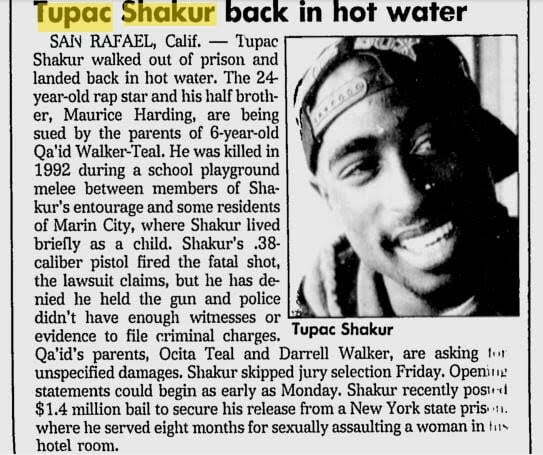 On Monday, April 5, 1993, Tupac was arrested and accused of trying to hit a fellow rapper Chauncey Wynn from the group M.A.D. with a baseball bat at a concert at Michigan State University.

On October 31, 1993, Tupac was charged in the shooting of two off-duty police officers in Atlanta.

Tupac, while in New York for the filming of the movie ‘Above The Rim’, is arrested for allegedly sexually assaulting a 19 year old woman (Ayanna Jackson) in his $750-a-night, 38th floor Parker Meridien Hotel suite.

Tupac was charges on the sexual abuse and sodomy charges and weapons charges in New York City. The sodomy and weapons charges were dropped. Shakur was sentenced to 11/2 – 41/2 years in prison, to which he served nine months (beginning February 14, 1995) at the Clinton Correctional Facility.