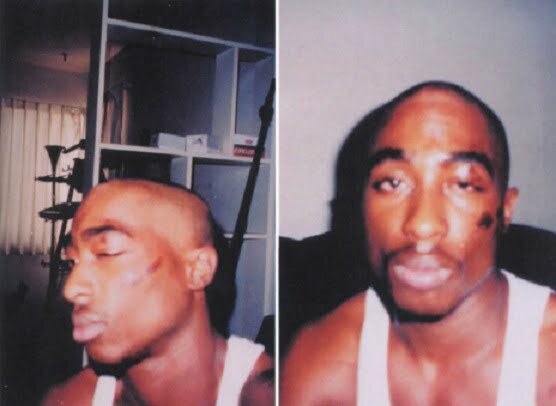 On Octomber 17, 1991 Tupac was brutally assulted by a police officers Boyovich and Rodgers for jaywalking across the street. He asked why it look two officers to stop him for jaywalking. After all. had a high rate of serious crime. Jaywalking didn’t seem like that big of a deal. Finally, Tupac lost his temper and swore at the officers. They put him in a choke hold and knocked him to the sidewalk. ”I woke up cuffed up, with my face in the gutter with gang of people watching me like I was the criminal,” he recalled.

Tupac spent seven hours in jail before the police released him. He missed the debut of his video on the popular hip-hop television show YO! MTV Raps.

“Basically, I walked across the street. 17th on Broadway. The police stopped me on the sidewalk and asked to see my ID. They sweated me about my name, the officers said that You have to learn your place.

They were charging me with Jwalking. So I was riffing and arguing about why would they charge me with such a petty crime. So I kept yelling asking them to give me my saltation and let me go aboutmy business. Next thing I know my face was being buried into the concrete and I was laying face down in the gutter..waking up from being unconscious. In cuffs. With blood on my face, and I’m going to jail for resisting arrest…

That’s harassment to me. That I have to be stopped in the middle of the street and checked like we in South Africa.”

2Pac & Shock G Interview with BWTV, Back Room at Jamaica...

Snoop Dogg – SD Is Out

2PacLegacy - January 12, 2022 0
Tupac Shakur’s sister is suing the executor of their late mother’s estate, accusing him of having “embezzled millions” and refusing to hand over personal...