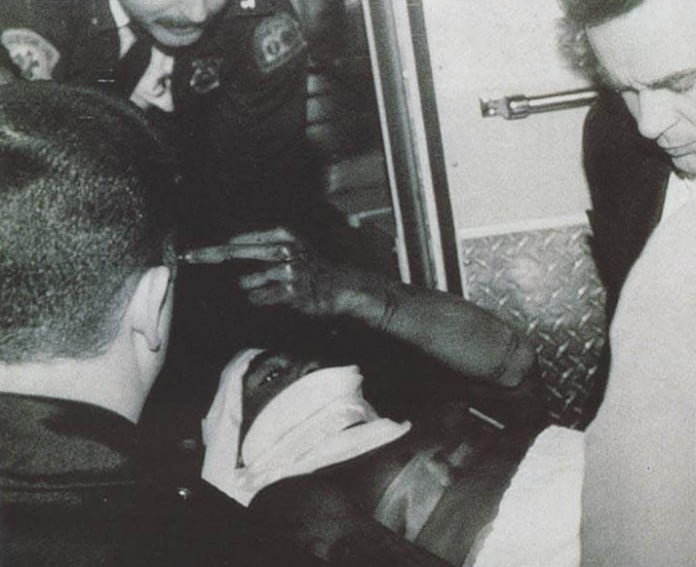 SIGNIFICANCE: To many, the rape trial of Tupac Shakur was proof that “gangsta’ rap” promoted violence and that it also demeaned women.

“Gangsta’ rap,” as its performers and aficionados call it, is a rhythmic, chantlike musical genre with lyrics that often glorify guns, drugs, and violence. During the peak of its popularity in the early to mid-1990s, one of the most popular “gangsta rappers” was Tupac Shakur. Before his violent death in 1996, Shakur was known to his fans as the king of “gangsta rap.”

Shakur was found guilty of groping in his room at the Parker Meridien Hotel on November 18, 1993, when she (Ayanna Jackson) was 19. Tupac together with several of his friends came in and, led by Shakur, forced her to perform oral sex on them. Shakur and his road manager, Charles Fuller, were taken into custody and charged with three counts of first-degree sexual abuse, sodomy, and illegal possession of a firearm after police found two guns in the hotel room. (One of the other two men involved was not apprehended, and the fourth eventually faced a separate trial.)

The woman testified that she had had consensual oral sex with Tupac at a nightclub four days earlier. But in the hotel room, she said, Tupac wanted to share her with his friends, who forced themselves on her. The defense said that she had made the accusations out of jealousy when she saw Tupac with another woman.

In her statement in State Supreme Court in Manhattan, the woman said that Tupac and the three friends “set upon me like animals.” Since then she said she has received threatening phone calls, lives in constant fear, has suffered nightmares and, while Mr. Shakur “has been glorified by his peers and fans,” she has been viewed as a villain.

From the beginning of Shakur’s trial, which began almost one year after the alleged incident had taken place, everyone involved seemed to expect a sleazy and dramatic courtroom battle. Justice Daniel P. Fitzgerald removed two jurors because they had been overheard voicing their disgust with the defendant and his music. Replacing the two jurors was a minor procedural hurdle for the court, but it was an omen of things to come.

Assistant District Attorney Francine James began the state’s case against Shakur by calling the accuser to the stand. (As is often the case in rape or sexual assault cases, the media did not report the victim’s name to protect her privacy.) She told the jury that she had met Shakur at a Manhattan nightclub several days before the alleged attack. During this first encounter, she acknowledged performing oral sex on Shakur, just half an hour after having met him. Later, the two returned to Shakur’s hotel suite for the night. She testified that the next day she called and left a message on his voice mail complimenting him on his sexual prowess from the night before.

Four days after this first encounter, she returned to Shakur’s hotel suite to retrieve something she had left there. She testified that she and Shakur had been in his room kissing when three of his friends burst in and attacked her. According to her version of events, Shakur grabbed her by the hair and began tearing her clothes off, while the other three fondled her. Earlier, in a statement given to prosecutors, she had quoted Shakur as telling her that she was “a reward for his friends” and that “millions of other women would be happy to be in her situation.” During cross-examination defense lawyer Michael Warren tried to discredit the alleged victim’s story, insinuating to the jury that it had been a consensual encounter with jealousy as the motive.

The defense called only one witness to the stand, Shakur’s publicist, Talibah Mbonisi. She testified that on the night in question she had returned to the hotel suite and was told that Shakur was with a woman; she heard no noises coming from the adjoining room. Some time later, according to her testimony, he came in and was talking to her when the victim burst in and demanded to know who he was with and why had he just had sex with her if he had someone else waiting for him.

Shakur later told reporters that his accuser was out to get him because she had seen him with another woman. Warren used the same theory in his argument to the jury, contending that the second sexual encounter with the rap star was as consensual as the first and that the allegations were made to punish Shakur for spurning her for someone else.

After both sides finished presenting their arguments, the judge charged the jury, defining for them the elements necessary for each offense to be valid, providing the definition of “beyond a reasonable doubt,” and giving them the parameters within which they were required to make their decision. The judge sequestered the jury during their deliberations, so they were unaware of the next event to take place during the trial.

One day after the jury began deliberating the verdict, Shakur and Fuller were entering a recording studio shortly after midnight when they were approached by several men with guns. The robbers ordered the men to give them all their jewelry and to lie on the ground. When Shakur reportedly refused, one of the gunmen shot him five times, and the robbers made off with $40,000 worth of jewelry that he had been wearing. The defendant was taken to the hospital, treated, and held for observation.

Against his doctor’s wishes, Shakur left the hospital soon after surgery and, wearing a knit Yankees baseball hat pulled over the top of his heavily bandaged head, returned to the courtroom in a wheelchair. If jury members were startled or curious about the sudden change in the defendant’s appearance, Justice Fitzgerald left them to puzzle it out for themselves.

Shakur’s courtroom appearance was brief; he was taken back to the hospital for further treatment and was there when the jury rendered its opinion. After only three days of deliberation the jury returned to the courtroom with its verdict: Shakur and codefendant Fuller were found guilty of sexual abuse and acquitted on the other charges. Apparently, the jury had not been convinced that sodomy or illegal possession of firearms had been proven beyond a reasonable doubt.

Shakur’s attorney claimed to be “ecstatic” that the rap star had been acquitted on the more serious charges, but quickly added that the defense would appeal the one guilty verdict. One of the grounds for an appeal had been given to the defense several hours before the verdict was reached when James revealed to the court and defense counsel that the prosecution had inadvertently withheld evidence from the defense—photographs of the victim’s chest taken the day after the alleged attack had been misfiled and were not found until the morning of the disclosure. While withheld evidence is often sufficient grounds to move for a mistrial, the defense decided to wait until the verdict was announced before determining what action to take.

The sentencing took place on February 8, 1995, and it was no less dramatic than the trial. The proceedings began with the victim explaining how the crime had affected her physically, emotionally, and psychologically.

“He took advantage of his stardom to abuse me and betray my trust,” she declared. Since the attack, she said, she had been turned into the villain while Shakur “has been glorified by his peers and fans.”

Shakur stared intently at his accuser while she spoke. When she finished, he stood and, with tears in his eyes, apologized, but it wasn’t clear for what. “I’m not apologizing for a crime,” he declared. “I hope in time you’ll come forth and tell the truth—I am innocent.”

Addressing Judge Fitzgerald before sentencing, Shakur virtually accused him and the court system of racism. “You never looked into my eyes. You never used the wisdom of Solomon. I always felt you had something against me.”

Then, in an about-face, he addressed the youth of America. “I got so involved in my career that I didn’t see this coming. I have no shame, I don’t feel shame.” This statement received a positive response from the many fans in attendance. At one point, a sheriff had to order a young woman back to her seat after she leaned over the railing and kissed the rap star on the cheek.

Justice Fitzgerald then addressed Shakur, “This was an act of brutal violence against a helpless woman.” And with that he sentenced Shakur to 18 months to four and one-half years in prison. Noting that Fuller had no criminal record and that Shakur had been the instigator of the attack, Fitzgerald sentenced Fuller to four months in jail and five years probation.