The press begins fighting for prime shooting positions by 8:45. MTV, local affiliates and national networks send out the same gumpy whiteboy cameramen they send everywhere. When Tupac steps off the elevator, the media comes alive. The bright fluorescents turn on his chiseled features, creating blinding glares and casting disfigured shadows. “Don’t touch my lawyer,” Tupac places a protective arm in front of petite Le’chelle Wooderd who is nearly toppled by the swarm.

The Honorable George H. Wu, the judge presiding over the Hughes Brother case, will sentence Tupac after closing statements are made. Attorney Chokwe Lumumba, National Chairman of the Revolutionary New Afrikan People’s Organization, is in LA working on the defense in the Reginald Denny case. He is Tupac’s constant legal advisor and part of Tupac’s extended family, ex- Panther and nationalist comrade to Afeni, who has watched Tupac grow into manhood. He testifies to Tupac’s ambition, his productiveness and his desire to be useful to his community. Le’chelle Wooderd reminds the judge that although the media and the prosecutor’s office have pursued the case like it was murder, it is simply battery. She pleads that his sentence be congruent with his crime, one that for the most part, Tupac never denied. 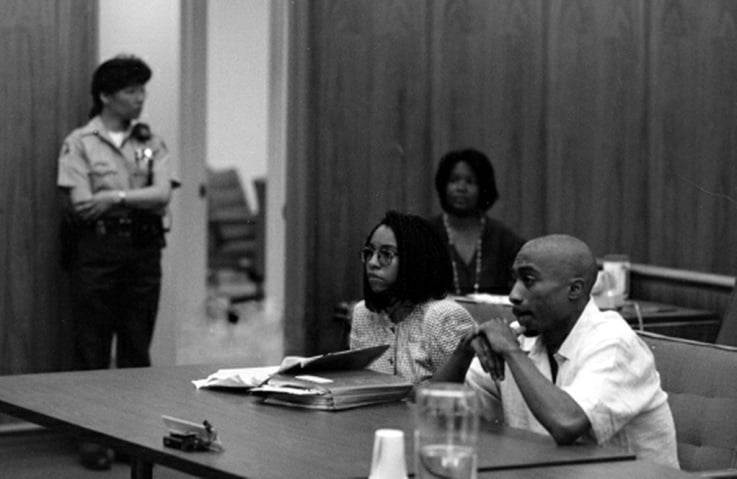 The attorney from the prosecutor’s office, a perpetually disheveled looking Black woman, ask for the harshest sentencing available. She attempts to weave images of cop-shooter, gangsta rapper, rapist and ghetto bastard into one giant menace to society. At one point she introduces a man who was the subject of a magazine article she read, one born in the perilous Cabrini Green projects of Chicago who apparently overcame white supremacy and capitalism to embody the American dream—a model Negro. Why can’t Tupac overcome his anger and do the same, she almost asks. Throughout her diatribe Tupac shifts in his seat anxious to defend himself. The judge allows him an opportunity.

“Your honor, I don’t know anything about the South side of Chicago or Cabrini Green projects. I never tried to explain my temper by telling you stories about my childhood, poverty, the plight of Black people or even rappers. I work hard and I have a lot to contribute to my community. And I can best do that by being on the streets, not behind bars. I got into a fist fight with a grown man and I’m willing to accept responsibility for my actions. But I’m not the monster she wants you believe I am.”

Judge Wu sentences Pac to 15 days in LA County, a sentence that is, as he points out, relatively moderate. The sentence is suspended and Pac is to report to the jail at 9 a.m. on May 10th.
Reporters rush outside the courtroom to tape the statement Pac promised them.

“Ask me the questions respectfully and I’ll answer them,” he regulates.

MTV asks the predictable: “What advice do you have for you fans?”

Tupac turns his baseball hat backwards. “Think about it. A fist fight becomes battery in the courts. Two and a have half minutes just cost me 15 days.”