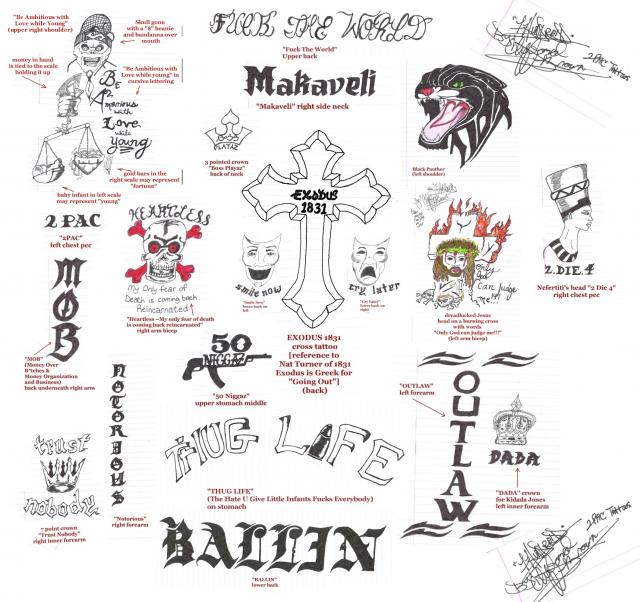 The outspoken nature of Tupac was also evident in the ink he wore on his skin. Messages of his faith and spiritual station could be found in the burning Christ on the cross on Tupac’s left bicep beside the quote – ”Only God Can Judge Me”, most noted tattoo the ”Thug Life” on his stomach and the acronym it stood for'( The Hate U Give Little Infants Fuck Everybody) – goes misinterpreted by his detractors to this day. 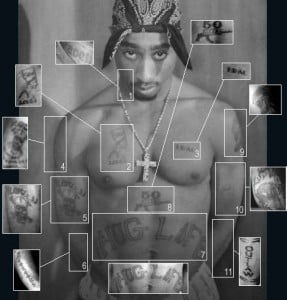 12) A Cross, with the bible verse “Exodus 18:11″, which reads: “Now I know that the Lord is greater than all gods: for in the thing wherein they dealt proudly he was above them.” 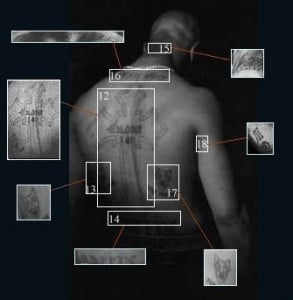 Tupac was 18 years old, he got his first tattoo, a simple “2Pac” inscription on his left chest.

This chest piece, Queen Nefertiti, symbolizes black grace and excellence and represents his love for his mother Afeni Shakur. Queen Nefertiti is a symbol for strong women. The text comes from the lyric above in his song ‘Something 2 Die 4’ – “You know what my momma used to tell me. If ya can’t find something to live for…. then you BEST, find something ta die for” – from ”Strictly 4 My N.I.G.G.A.Z…” album. 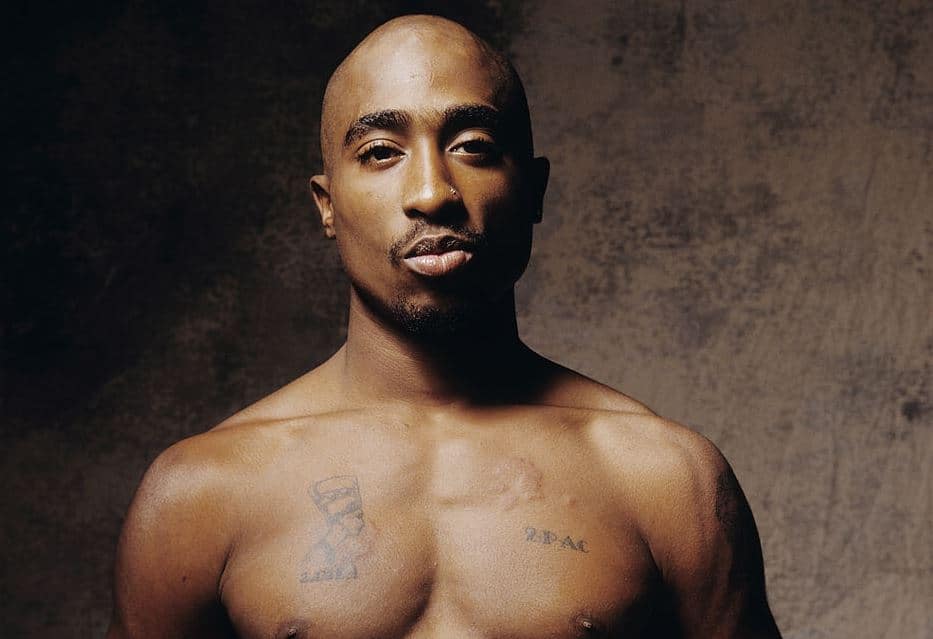 50 Niggaz: 50 Niggaz stands for 1 black from every state of the USA, all them niggaz would be stronger than every weapon, if they would be united. This tattoo specifically symbolized black unity. Tupac believed that if one black person from every state joined together with him, they’d be stronger than an AK-47. In his song ”Holla at me” from “All eyez on me” album, Tupac sang “I want members across tha fifty states”. He got this tattoo done with his stepbrother, Maurice “Mopreme” and Dana Smith aka Mouse Man.

Tupac’s most famous tattoo, on his abs, reads “Thug Life.” Directly above it is another one, which reads “50 Niggaz.” Those are both social movements, and the latter inspired the former.  “50 represented states,” Mopreme said. “If we had one good nigga in every state, we could accomplish anything.” 50 Niggaz developed and morphed into Thug Life, he went on, adding that when their friend Big Kato was murdered in 1993, it set Thug Life into overdrive. “It was really supposed to be about saving thugs’ lives,” Mopreme added. “A lot of people got the message, but a whole lot didn’t.” 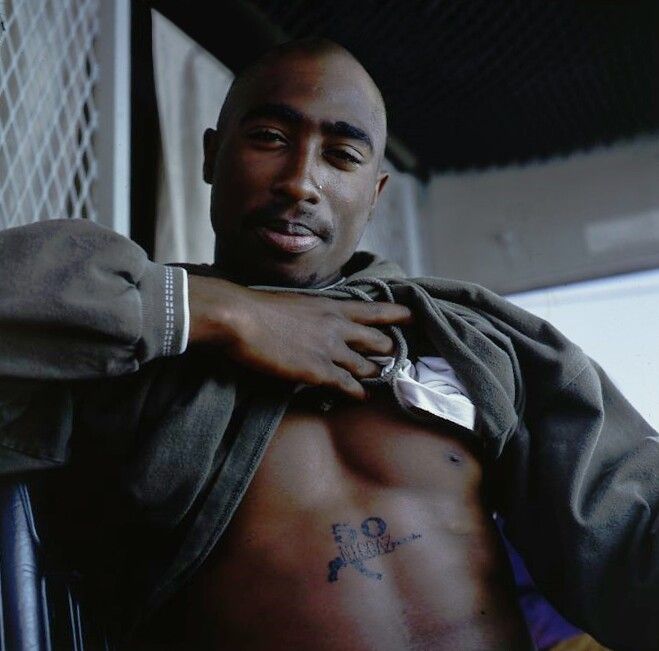 Tupac got his “Thug Life” tattoo in December, 1992 at Dago’s Tattoo in Houston. ‘THUG LIFE’ – an acronym for ‘The Hate U Give Little Infants Fucks Everybody’ is the most recognizable tattoo in music. ‘”Inside my mind, couldn’t find a place to rest. Until I got that THUG LIFE tatted on my chest.” -2Pac

The “I” in “Life” was replaced with a bullet. In late 1993, Tupac formed the group called Thug Life with a number of his friends, including Big Syke (Tyruss Himes), Macadoshis (Diron Rivers), his stepbrother Mopreme Shakur, and the Rated R (Walter Burns). The group released their only album Thug Life: Volume 1 on September 26, 1994, which went gold. 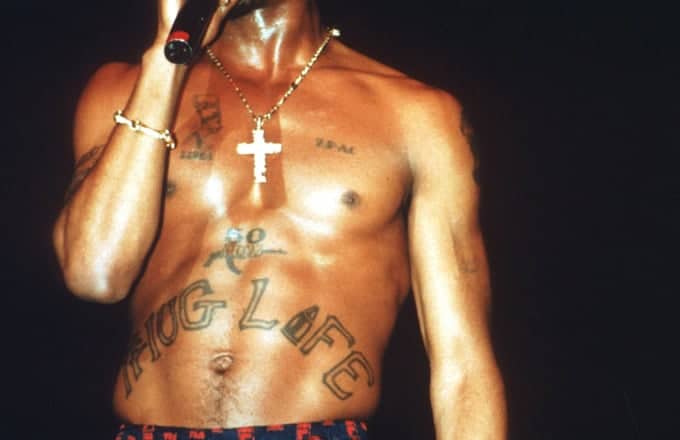 Tupac had a massive Cross tattoo on his whole back which has the shape of a Celtic cross. The tattoo artist Dennis “Dago” Coelho told in an interview that Tupac came to him and asked for a symbol on his back that he could take with him for the rest of his life and ended up having the cross tattoo which is often referred as Tupac cross. He had the words “Exodus 1831” tattooed inside the cross. Among the fans there are two possible meanings of Tupac’s EXODUS 1831 tattoo. One group believes that it refers to a verse from the bible. But the problem with that theory is that in the bible, chapter 18 finishes with Verse 27 so Exodus verse 18:31 is non-existent.

The other group believes that Tupac was inspired by the heroic courage of Nat Turner an African-American slave who led a two-day rebellion of slaves and freed the blacks in Southampton County, Virginia on August 21, 1831. The rebellion caused the death of approximately sixty white men, women and children. Whites organized militias and called out regular troops to suppress the uprising. In addition, white militias and mobs attacked blacks in the area, killing an estimated 120, many of whom were not even involved in the revolt. Nat turner was later captured and hanged.

The meaning of Exodus is a mass departure of people. Tupac Cross represents many things like faith, god, injustice, fight against corruption and human rights.

Tattoo on the back of his shoulders read “Fuck the world”, one of the tracks from his third studio album “Me against the world” released on March 1995. He expressed raw anger on “Fuck the World” and that was his message when he felt the whole world was conspiring against him. Tupac’s life was full of ups and down, so he got inked FUCK THE WORLD tattoo on his back to express his anger towards everyone.

On Scarface’s song “Smile”, Tupac said: “There’s gonna be some stuff that you’re gonna see / That’s gonna make it hard to smile in the future / But whatever you see / Through all the rain and pain / You gotta keep a sense of humor / Gotta be able to smile through all this bullshit. “.

Ballin is a word often used and heard as a slang, especially in the black community. It is originated from the term ‘having a ball’. Tupac had this tattoo on his lower back. This tattoo is the tenth track ”Str8 Ballin” from his album Thug Life: Volume 1(1994), in which he rapped, “I would share the definition of ballin’ with you white folks, but now the game is to be sold not told so fuck y’all.”

Tupac had inked a black panther head on his left arm. Panther tattoos are basically sign of power and strength. Tupac had inked black panther head on his left arm as a tribute to The Black Panther Party, in which his mother Afeni Shakur was an active member. The Black Panther Party was founded on October 15, 1966 with the aim of protecting black people and giving them justice in every field. Many members of Shakur family were involved in this party, some of whom were even imprisoned for serious criminal offenses, including his mother Afeni Shakur.

Jesus on burning cross in crown of thorns with: “Only God Can Judge Me” 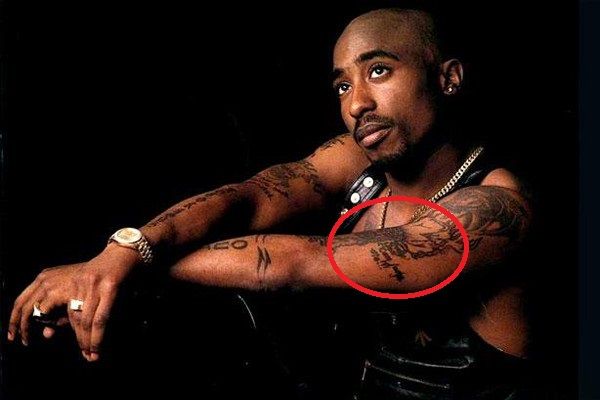 Outlaw can be defined as a person who is excluded from the benefit or protection of the law. It is an acronym of ‘Operating Under Thug Laws As Warriors’. This tattoo represents Tupac’s hip hop rappers group which he formed in late 1995 right after he got released from prison. This group called Outlawz was officially known as Outlaw Immortalz and Dramacydal. 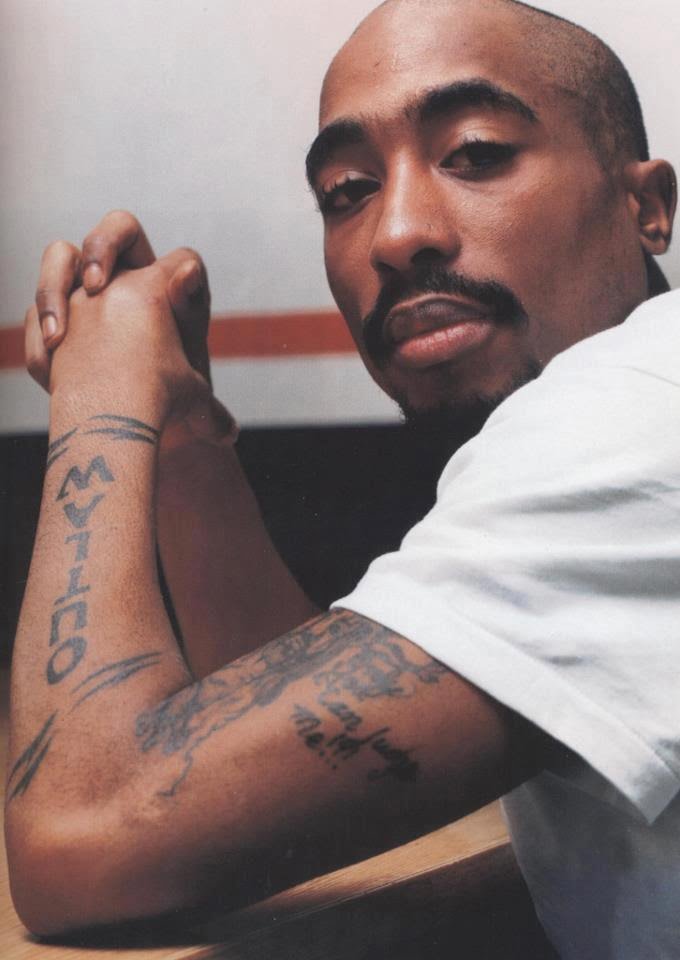 Be Ambitious With Love While Young (Tupac’s Right arm Tattoos)

Tupac’s right shoulder tattoo explained…(this tattoo is located above the Heartless skull tattoo.) .Tupac was saying that while he’s young he wants to be ambitious with love using both ambition and love to catapult his success.The writing says “Be Ambitious with Love while young” in cursive…The scale at the bottom looks to represent both youth and fortune as you can see gold in the right scale and a baby infant in the left scale…the scale are being held up by money tied to the goon as it is a balance of “life and fortune” “young and fortunate” or young and successful”,the skull goon has a beanie on his head with a sideways dollar sign “$” on the front which could mean “head of currency” hence the goon being the vicious hustler for money.There is also a worn bandanna over the skull goon’s mouth…Tupac had a true philosophy about being successful while young.This is the tattoo 2pac fans spent many years wondering about.On the right next to the actual photo is a 100% accurate illustration of Tupac’s right shoulder tattoo…On the left is a cropped up close photo of Tupac’s actual right shoulder tattoo,they’re brought side by side to break down the tattoo description. 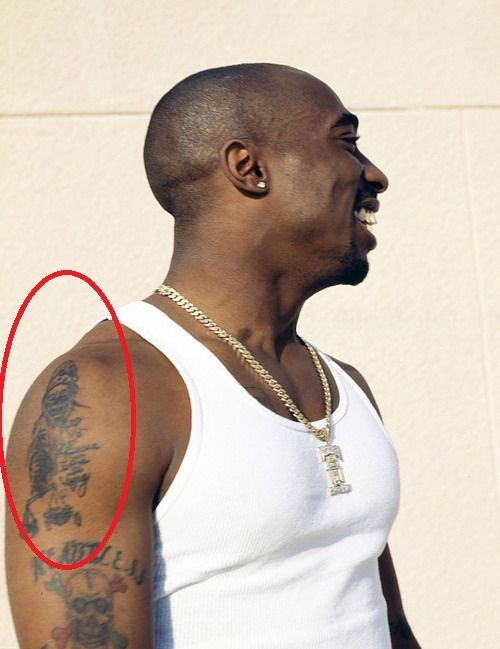 The word notorious basically means famous for bad quality or deed. Tupac Shakur had inked the word notorious on his right forearm in an old English font. This tattoo was in the memory of his best friend Big Kato who was murdered in 1993. 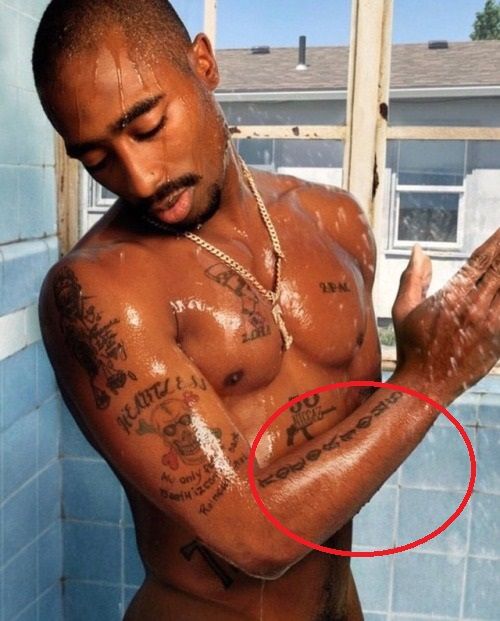 Tupac had “MOB” tattoo on the back of his right arm that stands for “Money over Bitches”.

The word mob means a large crowd of people usually get together to cause trouble and violence. Mob has many different acronyms but for Tupac, it meant ‘Money Over Bitches’ which he had described in his songs ‘Blasphemy’ (The Don Killuminati: the 7-day Theory,1996) and ‘MOB’ (Until the End of Time,2001). Later he described the word mob as ‘Money, Organization, and Business’. 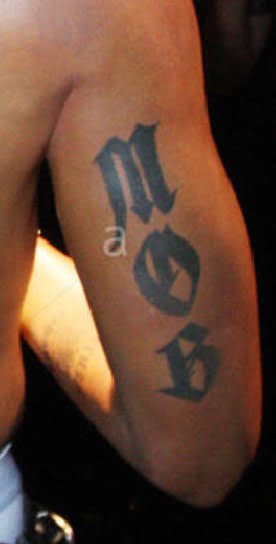 Tupac had a 7-point crown tattoo on his right forearm that said “Trust Nobody”. The crown is a traditional symbol of immortality. Tupac became quite paranoid, especially after being shot at the Quad Studios in New York in November 1994. He was convinced that it was a set-up by the people that were close to him. On All Eyez On Me’s ‘Holla at Me’, he rapped: “When me and you was homies / No one informed me / It was all a scheme / You infiltrated my team / And sold a nigga dreams / How could you do me like that?”. 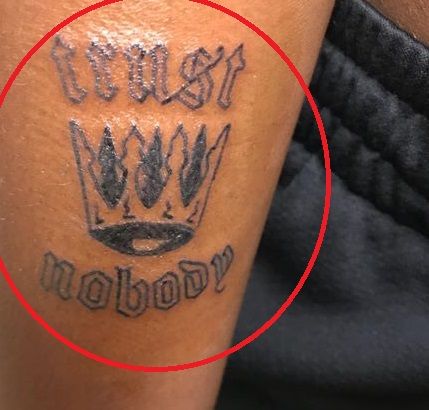 Tupac had “Makaveli” tattooed on his neck. Tupac released his 5th studio album “The Don Killuminati: The 7 Day Theory” under his alternative stage name Makaveli. Tupac created the alias “Makaveli” from Renaissance Italian philosopher and political theorist Niccolò Machiavelli, whose writings inspired him in the prison.

2Pac tattooed ‘Boss Playaz’ on the back of his neck along with a three-point crown. On the A three-point crown with the text “Boss Playaz”. For Tupac, “boss playa” is the next level a “thug nigga” should try to reach. In an interview Tupac said, “Coming from the ghetto, our development as men begins with a dust kicker, a thug nigga then finally a boss playa. […] [Many] never survive the next level of Thug Life. […] He used the term in 1995 when writing to former publicising at Death Row, Nina Bhadreshwar, while in prison. In the letter he elaborated; “A Boss Playa is a thinker, a leader, a builder, a moneymaker, a Soulja, a teacher and most of all a man!” 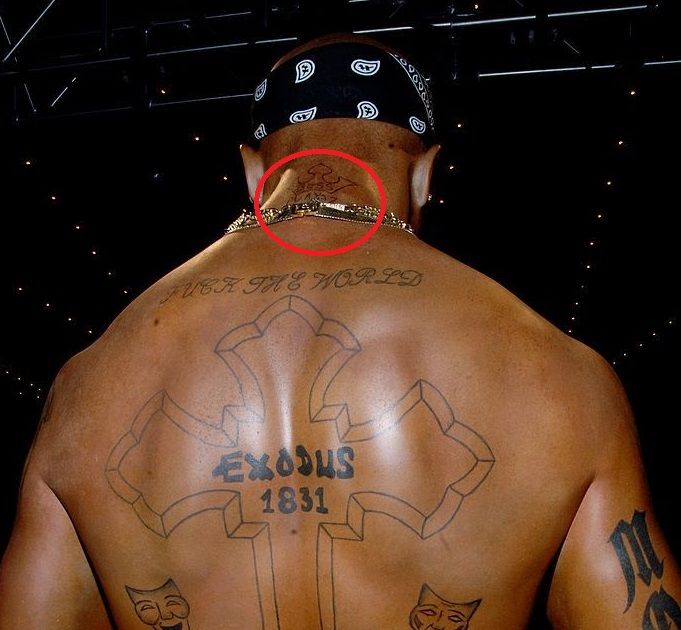 Tupac had inked this last tattoo on his inner left forearm. It is a crown with a word DADA under it. It was believed that this tattoo was dedicated by Tupac Shakur to his fiance, Kidada Jones, daughter of the legendary jazz musician and record producer Quincy Jones Jr. as a token of his love towards her. 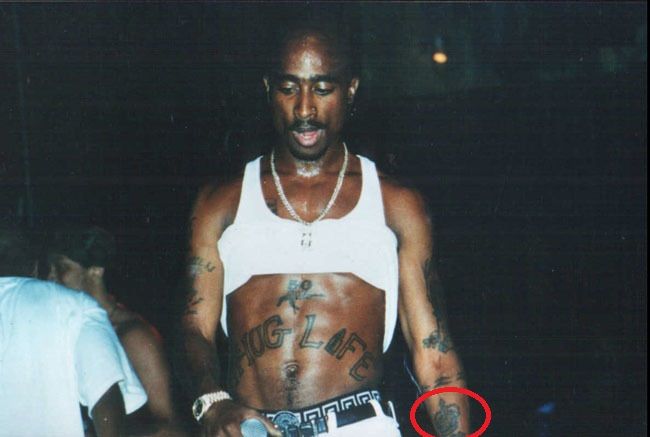 2PacLegacy - Modified date: April 10, 2021 0
Hundreds of DMX’s loyal supporters gathered outside of White Plains Hospital in New York to create a memorial in honor of the fallen rapper....