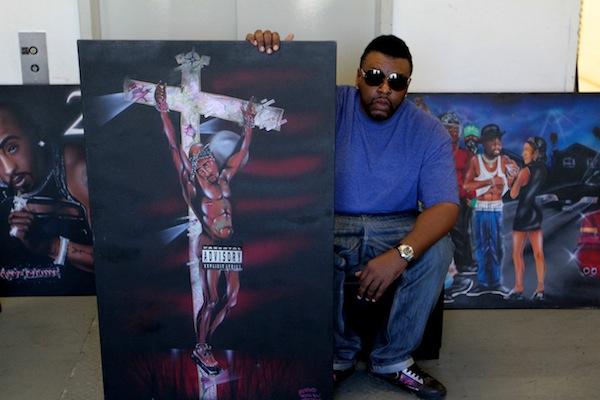 Ronald “Riskie” Brent : One day, while I was in front of my house, I saw a line of ’64 Impalas driving down the street with different people from the Death Row entourage inside the cars. I noticed that one of those cars was the same black ‘64 Chevy that they used in Dr. Dre’s “Nuthin’ But a ‘G’ Thang” video and everyone was saying how it was Death Row’s CEO Suge Knight driving Dre’s ‘64. One day, my “cousin” Gina took my art book to Suge. He liked my drawings and told her he wanted to meet up with me. That meeting never happened.

Suge wasn’t the easiest guy to get a hold of, but I went to the Compton Swap Meet one day not long after that and there was a mob scene. 2Pac, Suge, and everybody was filming the California Love remix video there. I approached him. He said he remembered me and the artwork in my book and told me to get it. I was like, “you gonna be here when I get back?” and he told me he wasn’t going anywhere. I ran across the street to get my book and he was true to his word. He took it and walked me over to a white van. He opened the door of the van and inside was 2Pac and a bunch of girls. That was the first time I met 2Pac.

2Pac and Suge looked through my book. They liked what they saw, but I’ll never forget when 2Pac saw my drawing of Biggie. He made a gun with his hand, pointed it at the drawing, and yelled, “Boom! Boom! Why you paint him?” I didn’t even know 2Pac had a beef with Biggie at that time. So I told him, “I don’t know. I just paint, man.” Before Suge and I exchanged numbers, 2Pac said to Suge he wanted me to do something for his new joint with Snoop, “2 of Amerikaz Most Wanted.” I’m not sure if I was supposed to do artwork for the single or for the video, but nothing ever came of it.

Few months later around mid-August 1996. I was in the back office I shared with Hen Dog at 9171 Wilshire Boulevard, which we had recently moved into. Hen Dog and I used to smoke weed back there all the time to keep our creative flow going. We would blow the smoke out of an open window. Norris Anderson [Suge’s brother-in-law], who was Death Row’s general manager at the time, called me into his office to tell me about a new assignment. He told me from the jump that “it’s gonna be something crazy.”

Apparently, Suge and 2Pac had a meeting and wanted me to paint 2Pac on the cross for the Makaveli album cover. The concept was all 2Pac’s. Norris said I needed to have a mock-up ready that evening for a Death Row staff meeting with Suge at Gladstone’s. I thought about it a bit, found a painting of Jesus Christ, and cut out a photo of Tupac’s face from the March 1996 issue of The Source to put on top of it. I showed it to Suge after the meeting and he said, “That’s it. Get to work.”.

A few days later, I went to see 2pac at Can-Am [Death Row’s recording studio in Tarzana]. I brought the unfinished canvas painting with me. The cross hadn’t been filled in yet. 2Pac asked me, “Yo, can you make the cross into a road map?” He told me the cities he wanted on there, where he wanted them, and that he wanted a compass on top of it to signify east to west. The compass was real important to him. He told me he felt that he had been crucified by certain cities and that he wanted to shout them out.

After our meeting, I cut up a Thomas Bros. map guide and pasted everything together. The holes in the map with lights coming through them were my idea. ‘Pac’s body and the background was all air-brushed. It was a real work of art. I went to his penthouse on Wilshire Boulevard the night before he got shot in Las Vegas [September 6, 1996]. He told me, “this shit is dope!” He loved it, raved about it for a few minutes. All of the Outlawz were there, too. That night 2Pac told me he was going to host a gallery showing of my artwork.

Death Row had already given me a budget of $5,000 for materials for it and everything. Unfortunately, because he died and Suge went to prison, that never happened. 2Pac also told me he wanted me to do artwork for his new house in Calabasas and for his penthouse. I’ll never forget that.

Spice 1 on Recording with 2Pac the Night Before His Murder,...

C-Bo Talks About Working with Tupac