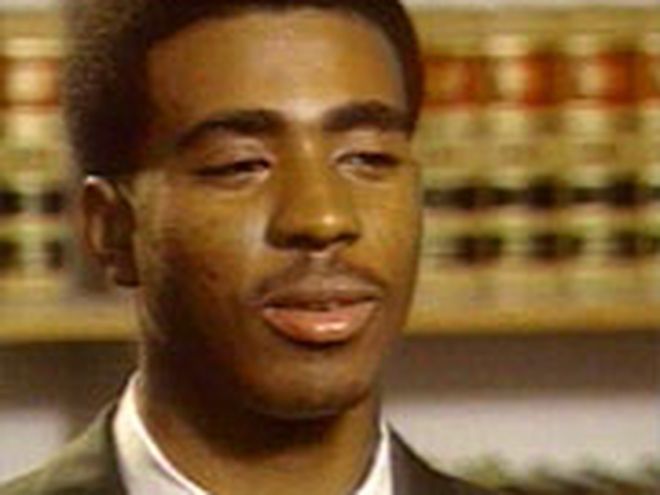 Orlando Tive “Baby Lane” Anderson (August 13, 1974 — May 29, 1998) was an alleged affiliate of the South Side Compton Crips and was a person of interest in the brief investigation of the murder of acclaimed rapper Tupac Shakur by Compton and the Las Vegas Metropolitan Police Department. Specifically, Detective Tim Brennan of Compton filed an affidavit naming him as a suspect, although fans and others have speculated as to Anderson’s involvement since the incident. He was never charged for the murder.

Orlando’s had been a secure childhood. His father, Harvey Lee Anderson, split with his mother, Charlotte Davis, but Orlando had grown up in his great-grandmother Utah’s house on South Burris Road, surrounded by aunts, uncles and grandparents. The lampposts on South Burris where Orlando grew up are all spray-painted with the letters ‘SS’: South Side. A stop sign has been redesigned in blue aerosol paint to read: ‘Can’t STOP the SSC’. This is South Side Crip territory.

It was a typical South Central family history, in many ways. Utah (Lane’s grandmother) , born in Texas just before the outbreak of the First World War, had left the South in the great African-American migration northwards. South Central boomed briefly during the Second World War as LA’s munitions industries soaked up labour, but the war ended and South Central turned into a massively overpopulated slum.

Utah moved to Compton in the Fifties, when it was an affluent middle-class neighbourhood, only to watch property values crash as whites fled. Orlando’s mother Charlotte worked 12-hour shifts as a bookkeeper to support her children, but on most weekends there would be some large family gathering that brought everyone together to play sports and have a big meal.

He lived with his girlfriend Rasheena Smith in her apartment in Lakewood, just south-east of Compton. She was a student nurse, they had two girls, Krystal, then aged two, and Courtney, one. But he was also juggling another relationship, with a girl named Taiece Lanier, who had just given birth to a girl, Ariel. Orlando’s uncle Kefee D lived in the white house next door.

Orlando had a close relationship with his half-brother Pooh, and together they later founded a record company called Success Records.

Orlando’s other passion was sports. So on 7 September, he drove to Las Vegas with Rasheena in a borrowed car to watch the Tyson fight, checking into the Excalibur Hotel just across the street from the MGM Grand.

After Tupac was shot, the Las Vegas police were strongly criticized for failing to conduct follow-up interviews with possible witnesses who were in the cars behind Suge Knight’s. Some of these, of course, was reluctant to talk to the police. Suge was the only person in the car with Tupac; Las Vegas police frostily described him as ‘uncooperative’.

On May 29, 1998, Orlando Anderson and associate Michael Reed Dorrough were involved in a shootout with gang members, Michael Stone and Jerry Stone, outside of Cigs Record Store in Compton, California. Anderson and both Stones later died at Martin Luther King Jr.-Harbor Hospital (formerly King/Drew Medical Center) in Los Angeles, California. Dorrough was later charged for his involvement in the shootout.

The shootout took place about 3 p.m. on May 29, 1998, at Rob’s Car Wash at Alondra Boulevard and Oleander Avenue. Sparked by a dispute over a drug deal, the brief but intense gun battle scattered bystanders and left four men sprawled on the pavement, all of them gang members.

According to police, two of those who lost their lives, Michael Stone and his nephew Gerry Stone, were members of the Corner Pocket Crips gang from Compton. Anderson, like Dorrough, was a member of a different Compton group called the Southside Crips.

On the day of the incident, Anderson drove past the carwash, where at least three members of a rival gang had gathered.

Anderson pulled into the business and got into an argument about the unpaid drug debt with Gerry Stone, who witnesses say immediately brandished a weapon. Witnesses also say that Dorrough talked Stone into putting the gun away, but that Anderson pulled out his own gun and a battle ensued.

Anderson shot Gerry Stone before being slain himself in a hail of bullets. When Anderson dropped his gun, a wounded Dorrough recovered it and returned fire, killing Michael Stone, his lawyer said.

On 12 September, Compton police received a report from a gang contact who said that Bloods affiliated with Death Row believed Tupac’s assault on Orlando had been prompted by an incident a few weeks earlier: three Piru Bloods had been approached by South Side Crips in a Foot Locker – a sports-shoe chain – in Lakewood Mall. One of the Pirus, Trevon ‘Tray’ Lane, was wearing a gold necklace from which dangled a Death Row emblem – a personal gift from Suge Knight. One of the Crips snatched it. In South Central, that’s like taking a war trophy.

According to the informant, Tray had been part of the Death Row posse the night of the Tyson fight and had told Tupac in the seconds before Orlando Anderson was assaulted that Orlando was one of the Crips who had confronted him in the Foot Locker. The informant then fingered Orlando as the man who later shot Tupac.

In Compton, a bloody war broke out between the North and South Sides. Over the next few days, police counted 12 shooting incidents and three fatalities. Paranoia gripped the neighbourhood. There were rumours that Bloods were being offered $10,000 for every South Side Crip killed.

On the night of 2 October, 300 police officers swept down on the houses of known gang bangers in Compton and neighbourhoods to the south and east. The raid was ostensibly part of a crackdown to try to halt the warfare. But it also gave Compton police the opportunity to arrest Orlando.

Orlando was free, but now he was publicly identified by the damning – yet ultimately inconclusive – evidence that had been leaked to the press. He became ‘the man who shot Tupac’. Now when he went out, he realised people were looking at him. He would think: ‘They know who I am.’

One day, he sadly told his attorney: ‘You know, I don’t think I’m going to have a long life.’

Orlando “Baby Lane” Anderson, a Crips gang member who was beaten up by the Death Row entourage a few hours before Shakur’s shooting. He was fatally shot on 29 May 1998.

Keith/Duane “Keffe D” Davis, a Crips gang member who confessed to police that Puff Daddy offered him $1 million to kill Shakur and Knight in 2008. He is still alive.

Deandre “Dre” Smith, who is believed to have died from obesity.

“Zip”, the man who supplied the gun.

On 29 May, 1998, Utah Williams, the 85-year-old matriarch at the heart of Orlando’s family, died in the hospital where she’d been taken after a fall. Orlando’s mother Charlotte remained at the hospital, so Orlando, who had been waiting for her at the family home, decided to go out and get a burger with an old friend, Michael Reed Dorrough.

A little after 3pm, driving a borrowed Chevvy Blazer, he pulled into the parking lot of Cigs Record Store, at the intersection of Alondra and Oleander. This is Corner Pocket Crip territory, directly to the east of South Side territory. Though both groups are Crips, they are rivals.

According to the police, Orlando spotted Michael Stone at a car wash across the intersection and confronted him about money that Orlando believed Michael owed him. Michael was accompanied by his nephew, Jerry Stone. Tempers rose, and a gunfight erupted. All four were hit; Orlando and the Stones were all fatally injured. / source: theguardian.com