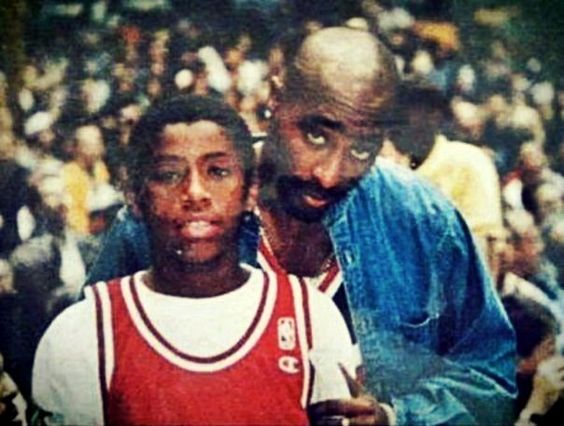 In 1993, Tupac received a letter from the parents of a dying boy, named Joshua. They said it was Joshua’s last wish to meet Tupac. Tupac flew to Maryland to meet Joshua and took him to a basketball game. Soon after Joshua’s death Tupac renamed his publishing company from Ghetto Gospel Music to Joshua’s Dream.

Tupac put together a benefit concert to help a growing non-profit organization, A Place Called Home, raise money for a new building. Founded in 1993, A Place Called Home is a safe haven in South Central LA where at risk youth are empowered to take ownership of the quality and direction of their lives through programs in education.

Through his bodyguard, Tupac heard about a 14-year old girl who was paralyzed from the waist down and confined to a wheelchair after a terrible car accident. Tupac called the Make-A-Wish Foundation to inquire about this little girl. During the phone call, Pac learned the girl was scheduled to meet her celebrity idol, but the celebrity canceled just before the meeting date. Tupac stepped in and flew the girl and her aunt to California to join him on the set of “Gridlock’d.”

Afterwards he took them to the recording studio and later hosted a personal BBQ cookout at his house in honor of her.
Tupac later donated a brand new audio system to her school.

During a promo tour stop in Washington, DC, as Tupac was on his way back to the airport, he heard on the radio about a young girl who was in the emergency room after being attacked and mauled by a dog. Tupac told the driver to turn around and take him to the hospital where the young girl was located. He stayed with her and her family until she fully recovered and maintained a relationship with her until he passed away.

On Oct. 14, 1993, he made a last-minute flight from New York to Aberdeen to visit Joshua Torres, an 11-year-old fan dying of complications from muscular dystrophy. The meeting was private: no television cameras; no live broadcast by the radio station that had helped set up the meeting. Shakur spent 30 to 40 minutes with Joshua. He held Joshua’s hand, talked to him, cried with him. Then, he was gone, and within two hours, Joshua was dead.

“When I told him Josh passed away, he was like, ‘Aw, man.’ He was pretty emotional,” says Sgt. Abdul-Hakim Torres, Joshua’s father. “I was really shocked that he stopped what he was doing, got in the jet and came down here to visit my son. Just like that, Bang! It happened.”

“He held on till then,” said his father, a sergeant stationed at Aberdeen Proving Ground.

“He was getting really sick,” his mother said. To lift Joshua’s spirits, she called a radio station to find out how she could get Mr. Shakur to phone her dying son.

Not only did the singer call, but in a matter of hours, he arrived via jet to the proving ground from New York and was knocking on the Torreses’ door.

“Joshua was very weak, but he smiled for him and quoted some of his lyrics,” Mrs. Torres said.

We (The Torres family) are writing to you in reference to Mr. Tupac Shakur’s sentencing on March 10, 1994. We feel that we are more than just fans of Mr. Shakur due to what he did for our son on October 14, 1993. Our son Joshua, 11 years old passed away on that evening due to Muscular Dystrophy that led to a Cardiomyopathy (Enlargement of the heart).

Our son felt very proud of Mr. Shakur’s music and the way he acted in movies. When Joshua listened to the music he would pick up the messages behind the music and disseminate them to his friends and his sister. Our son’s health conditions declined and he was admitted to the John Hopkins Hospital for a week and a half.

Two days after arriving home October 14, Joshua became very ill and was not looking well. My wife Diane stated calling the Make – A – Wish Foundation to see if we could grant a wish for him to be visited by one of his favorite stars. The Foundation could not help due to time and travel limitations. As my wife sat near Joshua, she asked him who would he like to see and he named five stars including Mr. Tupac Shakur. Out of the five names, Mr. Shakur was the only one to make Joshua’s wish come true. My wife called WPGC FM Radio Station and spoke with Ms. Dawn Scott (Promotion Coordinator) and asked if she could contact Mr. Tupac Shakur for her and have him call our son.

Thirty minutes later Mr. Shakur called our son and talked to him for about fifteen minutes. During the conversation our son was having difficulties and Mr. Shakur told him to hang in there and to “Keep ya head up” which was Joshua’s favorite song on the latest album. Mr. Shakur asked our son what else could he do for him and our son asked Mr. Shakur could he visit him. Mr. Shakur told Joshua that he was not too sure but he would look in to it and really try. Prior to hanging up the phone I spoke with Mr. Shakur and he asked for directions on getting here to our home in Aberdeen, Maryland.

Joshua was so happy knowing Mr. Shakur was on his way to visit him as he lay on his bed in pain waiting as patient as he could possibly wait. At 8:00pm Mr. Shakur arrived and spent over an hour beside our son holding him and comforting him as much as possible and expressing lots of sympathy for our son Joshua. Mr. Shakur talked to my wife and I and expressed his sympathies followed by hugs and departed. Later that evening forty five minutes after Mr. Shakur left our son Joshua passed away. We have lots of respect and feel very close to Mr. Shakur for dropping everything on his agenda to fly down from New York to visit our beloved son Joshua.

We can never thank him enough for all that he did. He sent our son some memorabilia’s and flowers upon hearing the news of our son. We know that some of the public look at Mr. Shakur as a negative example however there is a positive side to him that is definitely greater than the public see or hears. In closing this letter we are asking you to please consider the positive things Mr. Shakur has done for the community but most importantly for our son Joshua Torres who’s wish was fulfilled prior to passing away. Along with that consideration please try to realize that sending him to jail is a disservice to our community in which Mr. Shakur has always supported and been there for. I believe that having Mr. Shakur give time to spend with the children is better than putting him in jail. Thank You.

Sincerely Yours,
Robert Torres
—————————————–
(After Joshua died , Tupac was so affected that he renamed his publishing company’s name from Ghetto Gospel Music to Joshua’s Dream.)