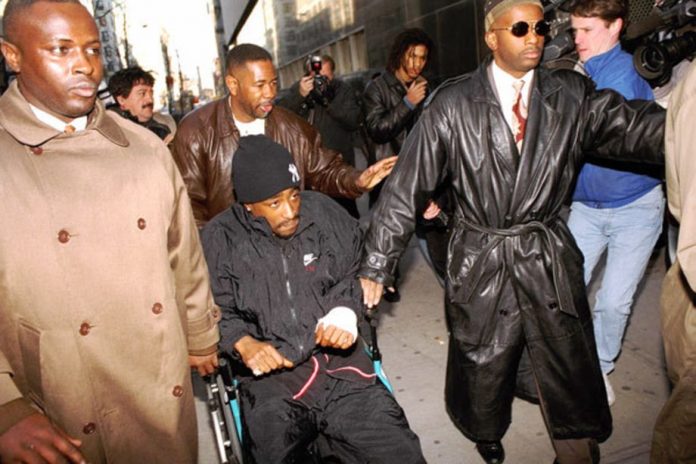 Stretch Involved or Not in the Quad Studio Shooting ’94 – The Shooter, witness & 2Pac’s Ex-girlfriend Talks

Dexter Isaac, one of the self-confessed triggermen in the infamous Quad Studio shooting of Tupac Shakur, currently sits behind bars at Rikers Island prison. In an interview with Gully TV last month, he accused ‘Pac’s close friend Stretch of paying Jimmy Henchman $2,500 to orchestrate the ambush.

Stretch’s brother Majesty from Live Squad did an interview with Info Minds regarding Dexter Issac’s statement that Stretch was in cohoots with Jimmy Henchmen setting up Tupac to get robbed.

During a conversation with documentarians Info Minds, Tupac’s brother-in-law Zayd Shakur Turner insists Isaac has no clue what he’s talking about.

“I was there,” he says. “I don’t know you bro. Dexter Isaac cat, I don’t know you bro. I don’t see where you was there ’cause I was there. That’s a bunch of bullshit. Your story don’t collab. Anybody really paying attention is gonna recognize that. They gonna recognize that this nigga’s story done changed 50,000 times. You full of shit, BRUH. You wasn’t there. But you know the niggas that was.

From there, Zayd dives into his account of what really happened the night of November 30, 1994. He’s adamant Stretch wasn’t involved in the plot to kill ‘Pac. He says it was some local stickup kids.

Zayd then explains what led to Stretch and ‘Pac’s fallout.

“Stretch was upset about that statement he made in a magazine — I think it was either the Vibe or The Source — where he was sayin’ dudes dropped like a sack of potatoes. Honestly man, that kind of pissed everybody off with ‘Pac sayin’ that. At the end of the day, it was one brother with us that did drop like a sack of potatoes and that’s why he caught a bullet in his abdomen. And he know what bullet was in his abdomen.

“But at the end of the day, he caught a bullet in his abdomen ’cause he got down on the floor, no resistance. Soon as niggas said, ‘Get down. Get on your knees and put your head on the wall.’ First thing that came to our mind was execution style. We lookin’ at each other like, ‘Oh, fuck no.’ Without being rude or disrespectful for causing the gun to pop off, we standing there and niggas dropped quick. So Stretch seen ’em and Stretch went right behind ’em.

It was like he was kinda protecting his man like, ‘What the fuck you doing but let me get down too. Let me get down too with you. I’ve just gotta follow suit. I don’t want you to cause nothing. So it seemed like that’s how he was moving.”

Desiree Smith (Dez) met Tupac in 1993 and became one of the closest friends to Tupac. When he was in prison, Desiree Smith is the person who received the most letters from Tupac, from Clinton Correctional Facility in Dannemora, New York, where Tupac imprisoned from February 08 to October 12, 1995.

In the second part of The Art Of Dialogue interview, Desiree talks about Big Stretch, Jasmine Guy and Quad Studios shooting.

At the time of the ’94 shooting at Quad Studios, ‘Pac and Desiree Smith wasn’t on speaking terms after they had a falling out two weeks prior to the incident. After hearing Tupac was shot, she was scared and shook up. She remembers going to the hospital as soon as she heard the news but ‘Pac was gone!

Tupac was taken to Bellevue Hospital but later checked himself out. Upon leaving the hospital, ‘Pac went to stay with good friend, Jasmine Guy, who he trusted and would feel safe there. Desiree says that Tupac and Jasmine Guy had a ‘Special relationship’ and that Tupac directly told her that he and Jasmine were more than friends.

Desiree goes onto speak on how she got back in contact with Tupac once he was in prison, revealing that Tupac’s once close friend, Big Stretch, was hanging with Junior Mafia and how he had tried to hit on her!

After talking to Big Stretch in a club about Tupac losing contact with her, Desiree gave Stretch her number in the hope that it would reach Tupac. According to Desiree, Big Stretch called her saying he had a message for her from ‘Pac. Stretch then turned up at her place with people from Junior Mafia and Bedford Avenue.

He later tried to sweet talk her after delivering no message from Tupac. With everything that she was hearing about Tupac thinking that Biggie had something to do with the Quad Studio incident, she thought it was fishy that Stretch would be hanging with Biggies crew.

With Stretch showing up at her place, she contacted Tupac by the way of letter saying “This your boy! What’s he doing with your enemies people’s and whys he tryin’ to holla at me?!”

On January, 15, 1995, Awaiting sentencing in the city jail on Rikers Island, Tupac gave an exclusive interview to Kevin Powell for Vibe magazine. In the sit-down, Tupac implicated Biggie, Combs, and Harrell in the ambush, although he was unclear about the motive for such a betrayal. Powell’s interview, which appeared in the April 1995 issue, set the hip-hop world in fire. Combs and Biggie vehemently denied their involvement, but made a decision not to fuel the firestorm with more words.