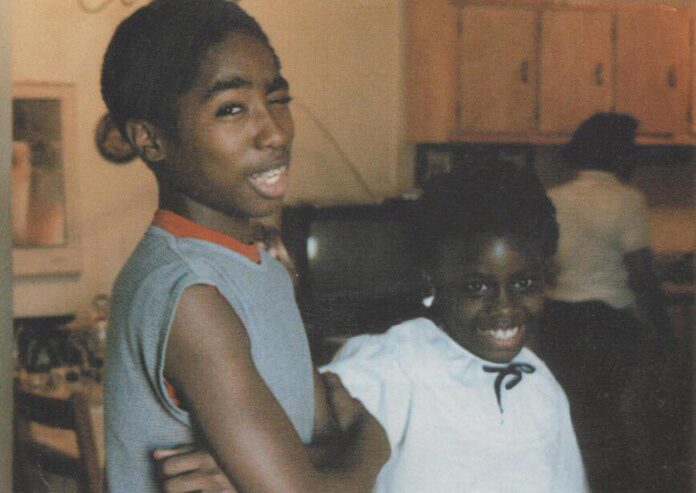 Sekyiwa Shakur, fondly nicknamed as “Set” by those closest to her, is the half-sister of Tupac. Although she chose a different approach to life from her brother, namely not being the center of attention for society, her fascinating tale is something worth knowing. So without further ado, this is the life of Sekyiwa Shakur.

She was born on October 3, 1975, in East Harlem – a time and place full of riots and disturbance. Sekyiwa shares the same mother as Tupac – Afeni Shakur and her father’s name is Mutulu Shakur. Their mother was an activist from an early age. Afeni and twenty fellow-Panthers were arrested on April 2, 1969, and charged with several counts of conspiracy to bomb police stations, department stores, and other public places in New York City.

Afeni Shakur was released on bail in the fall of 1970 and became pregnant by New Jersey truck driver William Garland. Shortly thereafter, Afeni’s bail was revoked, and she was returned to jail to await trial. She gave birth to Tupac soon after.

Sekyiwa has three other siblings apart from the famous rapper and all of them lived in New York together when they were kids. At the early age of 5, Set came face to face with the injustice of the world – her father helped her aunt out of jail and was in turn imprisoned himself. Her aunt found refuge in Cuba but Mutulu is still serving a sentence.

The entire family spent many years in poverty and hiding due to their place in society, which took its toll on Sekyiwa. In an interview in 2017, she shared how big of an effect her childhood still has: “I’m bipolar. I battle with depression and suicide on a daily.”

Throughout her life, her brother and his fame started influencing Sekyiwa. Ever since they were kids their mother paid more attention to Tupac, which could have been detrimental to the young girl if she had let it. However, she chose to see things in a different and better light and became a stronger person for it. “Somebody should have been taking care of me, instead of me taking care of myself. I deserve to allow myself to believe in that, so I don’t have to beat myself for it.”

She moved to a mainly white neighborhood in California, which made her feel like an outcast but also gave her perspective. A few years later she returned home to Atlanta with a defined sense of self and a strong character.

Her brother’s story is a lot more different. He was initially named Lesane Parish Crooks, but his mom renamed him Tupac Amaru Shakur when he was just two weeks old baby. This was a show of respect to the 18th-century Peruvian revolutionary, Tupac Amaru II, which those who believe in fate might see as a sign, judging by Tupac’s involvement in the fight for social injustice and his involvement in the movement Thug Life.

Set was very different from her brother in regards to her public figure – “I kind of like my privacy. Because, as seen with my brother, his real name was his stage name, he couldn’t escape into a private world. I didn’t want my identity out there.”

Sekyiwa was in a relationship with E.D.I. Mean (a member of Tupac’s group called Outlawz) and when she was still very young they had her first child – a wonderful boy that was named Malik. A few years later she gave birth to their daughter Nzingha. The parents eventually separated but the kids were still raised by both of them and had a childhood much better than the one of their mother.

She married Gregory Jackson in 2003, who also helped with the raising of Malik and Nzingha. Sekyiwa has a second son (Cameron) as well, who recently graduated high school. Under the influence of their mother, the two boys and one girl all have a good education. Their mother believes that this is an important part of life and even though she had her first child when she was a teenager, she was persistent in her studies and enrolled in the Clark Atlanta University. Aside from her relationships with E.D.I. and Gregory Jackson, Set has revealed her connection to Ray Luv, a former member of “Strictly dope”. The rapper even stated on social media that she was “the love of his life”.

Set is the president of the Tupac Amaru Shakur Foundation, founded in 1997 by their mother, who at the time was living in Stone Mountain, Georgia, in a home provided by Tupac, before his death. After Afeni died in 2016 Sekyiwa took over the work in the foundation, proudly filling her mother’s shoes. And what a job she’s done – the foundation helps the young and the adults alike, providing help for families affected by incarceration as well as boosting the creativity of children. Visit the official TASF site.

Most important however is their help with mental health for all age groups. Sekyiwa organized an event in San Francisco in which she shared her plans for the future of the company. The foundation wants to help people that have been through a traumatic experience heal and learn more about themselves. “We are looking to change the way young people, especially people of our community see themselves,” is what the president answered when asked what her motivation is.

On top of all of this Set has a clothing line, Madamvelli, and a striking online presence. Her Instagram profile labels her the CEO of TASF and has more than 12 thousand followers. The rest of her family is also active in public society. Her brother Mopreme Shakur, stage name Komani is a member of Outlawz and co-founded “Thug life” with Tupac. Today he is a film producer, composer, and writer. Malik, Sekyiwa’s son, is making a career in acting.

Sekyiwa is an open activist, just like her family and maybe most notably her brother. She has always kept her head held high and she has always been proud of her legacy. Recently she made headlines when she collapsed after giving a passionate speech during the protests of Black Lives Matter. Set, accompanied by her family, attended a rally in California, supporting the cause with the words “We are worthy. We are not disposable. Each one of you is just as precious as George Floyd, as Tupac Shakur.”

“We are worthy. We are not disposable. Each one of you is just as precious as George Floyd, as Tupac Shakur.” pic.twitter.com/8ItUkjPTz9

Soon after, she collapsed and had to be carried out by her relatives. People were very worried about her, but she calmed everyone down when she wrote that everything’s okay, saying that this episode was caused by “wicked trauma” – something which she has proven she can deal with. The tragic tale of George Floyd reminds Sekyiwa of that of her brother, giving her reason to be a strong voice in the crowd of protestors. She believes in equality for all people regardless of who they are, where they’re from, and what their race is.

Set has lived through a lot of tragedies and most of them were connected with social injustice, which is why she is so active in the Black Lives Matter movement – a part of her actions are an homage to her brother and his social standing. For Sekyiwa Shakur George Floyd is no different from her brother, which is part of the reason why she is so passionate about getting justice not only for him but for everyone in a similar situation.

Afeni Shakur Net Worth Of $50 Million