Lumumba Abdul Shakur was born Anthony Coston on January 9, 1943, in Atlantic City, New Jersey. He was leader of Black Panthers in Harlem, killed New Orleans, Louisiana in May, 1985.

Lumumba Abdul Shakur was Afeni’s first husband. In September, 1968 she became the second wife of revolutionary polygamist Lumumba Shakur and changed her name to Afeni Shakur. The name Shakur (Arabic for “thankful to God”) was first taken as a surname by the father of Lumumba Shakur, Mr. Coston, after joining the Nation of Islam in the 1960’s. The name was then taken by several close of friends of Lumumba Shakur, including his wife Afeni (who had been given her first name Afeni by a Yoruba priestess).

On April 02, 1969, Afeni and Lumumba Abdul Shakur (right) was arrested and charged with several counts of conspiracy to bomb police stations, department stores, and other public places in New York City.  Afeni was released on bail in the fall of 1970 and became pregnant [with Tupac] by New Jersey truck driver William Garland.

This marriage fell apart when it was discovered that Lumumba was not the biological father of her newborn son Tupac Shakur in 1971.

During her pregnancy with Tupac, Afeni was incarcerated for participating in an alleged bomb plot during her time in the BPP. During the trial, she acted as her own defense attorney and the jury quickly acquitted her of all charges. Twenty other members were also involved in this alleged plot, including her husband at the time, Lumumba. The case was thought to be part of an FBI-led attempt to neutralize the BPP. After Pac’s birth, she got a job as a paralegal and raised him with an emphasis on education. She believed that Tupac’s work exemplified the principles she learned as a member of the BPP.

He was also the brother of Mutulu Shakur by adoption. He was a Black Panther member and the lead defendant in the ‘Panther 21? case where he and 20 others, including Afeni, were convicted for allegedly plotting to blow up banks and department stores. He was found dead in Louisiana a few days before Mutulu was arrested. Mutulu suspected that his brother was murdered by someone like a police informant, who learned of Mutulu’s whereabouts, and then decided to kill two birds with one stone.

Lubumba was her mentor, her lover, and her comrade. ”Lumumba was my king’‘ Afeni says in ”Afeni Shakur: Evolution Of A Revolutionary” book. 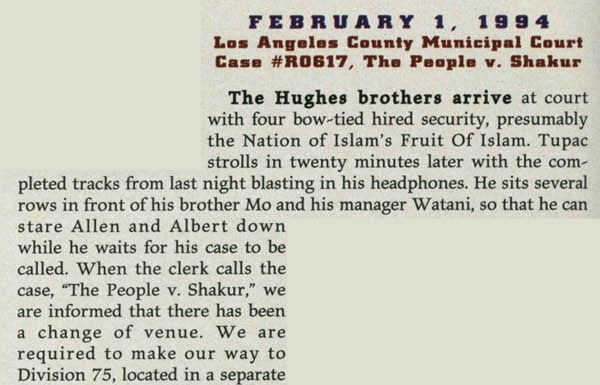 Snoop Dogg – SD Is Out