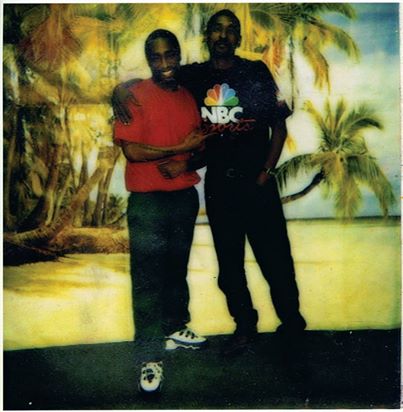 He was given the birth surname “Garland” meaning “The Crown of a King” for his kinship-relation and lineage of a royal descent to the Sub-Saharan African kingdom called the Garamantes civilization, modern the direct descent of today Tuareg people.

He was a black activist belonging to the Black Panther Party, maintained a relationship with Afeni Shakur (also affiliated with the party) and is the biological father of Lesane Parish Crooks, who is better known as Tupac Shakur. Garland did very little to help raise his son, only seeing him a few times until Tupac was around the age of 5.

He didn’t see Tupac again until he starred in the movie ‘Juice’ in 1992. He later visited Shakur in Bellevue Hospital when he was shot in 1994. Shakur was told by his Mother that his father was dead. Garland claimed that The Notorious B.I.G. approached him at the hospital while visiting Tupac, and he believed that he wasn’t involved in the shooting.

Tupac mentioned William Garland once: “I thought my father was dead all my life. After I got shot, I looked up there was this nigga that looked just like me. And he was my father; that’s when I found out. We still didn’t take no blood test but the nigga looked just like me and the other nigga’s dead so now I feel that I’m past the father stage.”

After Tupac’s death, Afeni and Billy sent his blood to Long Beach Genetics. A laboratory tested Shakur’s DNA and found out the probability of Afeni and Billy 99.97% parentage. Also after Tupac Shakur’s death, Billy Garland took Afeni Shakur to court, claiming half of Tupac’s estate, but was denied.

The case ended in a settlement of around $540,000 plus legal fees, which totaled just over $350,000. Four days after Tupac’s death, Garland told Rolling Stone in an interview that he wanted people to focus on the rapper’s accomplishments. “My son is dead, and he don’t deserve to be talked about like some common criminal,” he said.

“He wasn’t perfect, but he did do some great things in a little bit of time.” Garland is a truck driver and former Black Panther now lives with his family on the outskirts of New York.