The rapper was born Lesane Parish Crooks on June 16, 1971. While he was still an infant, his mother, Afeni Shakur, changed his name to Tupac Amaru Shakur, which made him the third well-known person to carry the name Tupac Amaru. While most of the time there’s not really a relation between a person’s name and their deeds, with some famous people it seems as if their awesome name had guided them through their lives to achieve great things. That, of course, is the case of Tupac Shakur, the rapper whose controversial life and music became a legend.

Tupac Shakur was born in the midst of trying times. His mother, Afeni Shakur, and her then-husband, Lumbumba Shakur, were arrested at their Harlem apartment on charges of conspiracy in April 1968. Admitted members of the Black Panther Party, they were charged with planning bombings throughout New York.

Their bail was set at $100,000 and other members of the Black Panther Party decided to raise bail money first for them, as there were 19 others who were arrested for being a part of the alleged ring. The goal of getting the Shakur’s bail was so that they could work to raise bail for others as they’d successfully done so in the past.

Afeni Shakur remained in prison while she awaited bail. Without a law degree, she chose to represent herself in court and faced a 300-year sentence. Afeni became pregnant with her son while she was in prison. She successfully fought her case and was acquitted in May 1971. Her son was born a month after her release on June 16, 1971.

Tupac Shakur originally named her son Lesane Parish Crooks. When he was a year old, she legally had Crooks’ name changed to Tupac Amaru Shakur. Tupac’s name means “shining serpent” in Inca.
An avid reader, Afeni Shakur was inspired to change her son’s name after something with a powerful meaning. According to a profile piece on the rapper and activist’s name on The Track Record, the first known Tupac Amaru was the last indigenous monarch of Inca.
The second known person to carry the name was José Gabriel Condorcanqui, better known as Tupac Amaru II. He was an 18th-century Peruvian revolutionary of indigenous blood who led the largest indigenous uprising in Spanish American colonial history. 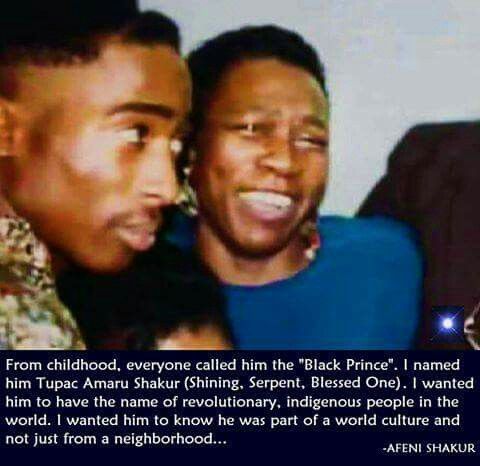 “I wanted him to have the name of revolutionary, indigenous people in the world,” Afeni Shakur once said about her son. “I wanted him to know he was part of a world culture and not just from a neighborhood.”

What does “Tupac Amaru” mean?

“Tupac Amaru” is derived from the name Tupaq Amaru, which, loosely translated, means sierpe resplandeciente or “Shining Serpent” in Quechua (the indigenous language of the Andes and second-most spoken language in Peru). The first known Tupac Amaru was an indigenous monarch—the last Sapa Inca, for any 16th-century Latin American history buffs out there. The second known person to carry the name was José Gabriel Condorcanqui—better known as Tupac Amaru II—an 18th-century Peruvian revolutionary of indigenous blood (he claimed to be a direct descent of the first Tupac Amaru). The second Tupac led the largest indigenous uprising in Spanish American colonial history. As many indigenous people of the Americas were, both were executed by the Spanish.

“[Tupac Shakur] was named for ‘the last Inca chief to be tortured, brutalized, and murdered by Spanish conquistadores…a warrior,’ Afeni says.”

What we do know is this: Tupac Shakur was aware of his ties to history. “That’s my real name. There’s nothing artificial about that,” he said in a 1996 interview on the set of the movie Gang Related. “There’s a gentlemen by the name of Tupac Amaru who was a freedom fighter, warrior—similar to myself—a chief, a leader for his people.”

What does “Shakur” mean?

Shakur was named by his mother, Afeni Shakur–a Black Panther party member who was carrying him while imprisoned–for Tupac Amaru, a 16th century Incan chief, according to published biographical material on the late rapper.

Means “thankful” in Arabic, from the root شَكَرَ (shakara) meaning “to thank”. In Islamic tradition الشكور (al-Shakur) is one of the 99 names of Allah.

Who is Túpac Amaru II?

Tupac Amaru, Micaela Bastidas, and much of their inner circle were captured in April 1781 and, as described below, executed in a grisly public spectacle on May 18, 1781 (aged 43). The first Tupac Amaru was the last indigenous Inca chief ruling at the time of the Spanish conquest. Though his reign lasted less than two years, he is known for fighting tirelessly against the invaders to protect not only his people, but also their culture and legacy. When the Spaniards conquered the main settlements of the Inca empire, some members of the royal family decided to flee and establish a new Inca state to plan their fight against the invaders. This state grew for about a decade, when it passed to Tupac Amaru, but just when he was getting used to the throne, the Spanish army declared war on their settlement. Tupac and his people fought bravely, but eventually, they were defeated by the enemy’s superior weaponry.

Túpac Amaru II was sentenced to be executed. He was forced to bear witness to the execution of his wife Micaela Bastidas, his eldest son Hipólito, his uncle Francisco Tupa Amaro, his brother-in-law Antonio Bastidas, and some of his captains before his own death.

The following is an extract from the official judicial death issued by the Spanish authorities which condemns Túpac Amaru II to torture and death. It was ordered in sentence that Túpac Amaru II be condemned to have his tongue cut out, after watching the executions of his family, and to have his hands and feet tied…

…to four horses who will then be driven at once toward the four corners of the plaza, pulling the arms and legs from his body. The torso will then be taken to the hill overlooking the city… where it will be burned in a bonfire… Tupac Amaru’s head will be sent to Tinta to be displayed for three days in the place of public execution and then placed upon a pike at the principal entrance to the city. One of his arms will be sent to Tungasuca, where he was the cacique, and the other arm to the capital province of Carabaya, to be similarly displayed in those locations. His legs will be sent to Livitica and Santa Rosas in the provinces of Chumbivilcas and Lampa, respectively.

After the failed dismemberment by the four horses, his body was quartered, and he was then beheaded on the main plaza in Cuzco, in the same place his apparent great-great-great-grandfather Túpac Amaru I had been beheaded.

The unique “Revolutionary Government of the Armed Forces” of General Juan Velasco Alvarado (1968-1975) launched Tupac Amaru as Peru’s national symbol by associating the rebel with all the regime’s activities, particularly the agrarian reform. Streets, plazas, halls, and five-year plans were named after Tupac Amaru, who also adorned Peru’s currency, coins, and stamps. Large statues in Lima and Cuzco honored him while dozens of plaques and smaller monuments celebrated other rebel leaders. Artists such as Jesús Ruiz Durand and Milner Cajahuaringa created portraits and posters that stressed the ties between the 1780-1783 rebellion and the Velasco government. Many of these adopted the colorful symmetry of pop art, with some of the posters now fetching heady prices as art pieces. A supposed Tupac Amaru quote, “Peasant, the master will no longer feed from your hunger” became the government’s leading slogan. Tupac Amaru never said this; Velasco’s speechwriters invented it.

In the 1960s and 1970s, and above all during the Velasco period, Tupac Amaru became a leading figure in Peruvian history. The question of his role in the war of independence continues to animate historians and others. Some follow Velasco’s interpretation, placing Tupac Amaru as the precursor, his uprising the bloody and frustrated first step in emancipation from Spain. Critics of this position from the left point out that Tupac Amaru sought a very different venture than did the liberators of the 1810s and 1820s and cannot simply be placed at the beginning of the list. Conservative critics, uncomfortable with indigenous revolutionaries, prefer to highlight the coastal-based revolts beginning in 1815.

Although these debates continue, particularly now that Peru is heading towards its bicentennial in 2021, what is clear is that Tupac Amaru has become a national and international icon. In some regards, the ambiguity about what the rebellion sought and Tupac Amaru’s role in Peruvian history has added to his mystique and allowed different groups to support him. Since the 1970s, Tupac Amaru has become a hero, while meaning very different things to different groups.