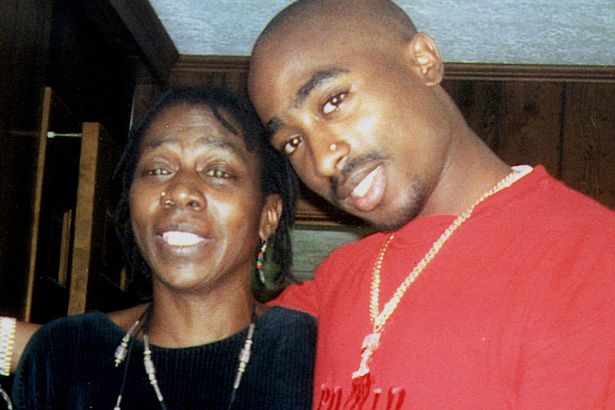 The daughter of Rosa Belle, a home maker, and Walter Williams Jr., a trucker. She had a sister Gloria ”Glo” Jean. She had a troubled beginning and grew up resenting her father and men in general because he was abusve and she thought her mother was weak because she did not stand up against her father. When the family left her father in 1958, they moved to the Bronx where she had difficulty in adapting to the educational setting even though her teachers thought the High School for Performing Arts was fit for her. She attended Bronx High School of Science. She became interested in street life and called herself a street fighter and a member of the Disciple Debs in Harlem. It was at Manny’s Bar on 169th Street in the Bronx that Afeni was introduced to the lessons of the Nation of Islam and Malcolm X, and even though she never joined the Nation, her search for self began.

In 1968 at the age of 21, she changed her name to Afeni Shakur, Afeni meaning “lover of people” and Shakur being Arabic for “thankful to God,” respectively.

In Harlem around September 1968, just as her nephew was about to enroll in 1st grade, the teachers of New York Public Schools were threatening to strike and Afeni decided to join with the Black Panther Party to help reopen the schools. Her life in the Black Panther Party began. She quickly rose in leadership, serving as a section leader and organizing lunch and other community improvement programs. She opposed racial discrimination and social injustices which showed why she got involved in the party. She wrote the Black Panther Party newsletter Panther Post. She led a successful campaign that led the FBI to believe the party was fading. She became a section leader of the Harlem chapter and a mentor to new members, including Jamal Joseph, Cleo Silvers and Dhoruba Bin-Wahad. She also worked with Billy Garland (Tupac’s biological father) and Geronimo Pratt (who became Tupac’s baptismal sponsor)

Afeni and twenty fellow-Panthers were arrested on April 2, 1969, and charged with several counts of conspiracy to bomb police stations, department stores, and other public places in New York City. Shakur was released on bail in the fall of 1970 and became pregnant by New Jersey truck driver William Garland. Shortly thereafter, Afeni’s bail was revoked, and she was returned to jail to await trial.

Due to the courts fear of flight by Afeni and other defendants, her bail was later revoked and she returned to jail five months pregnant. In a bold move, Afeni decided to represent herself as opposed to the court appointed attorney, and despite the odds stacked against her she prevailed. One by one, Afeni listened to the sound of not guilt, not guilty, not guilty repeated more than 100 times for the number offenses against her and other members of the Black Panther Party. She spent eleven months in jail and while free on $100,000 bail, Afeni became pregnant with her son. The acquittal came one month and three days before she gave birth to Lesane Parish Crooks in East Harlem on June 16, 1971. The following year, in 1972, Lesane Parish was renamed Tupac Amaru Shakur, which means “shining serpent” in Inca.

After the death of her first husband Lumumba Abdul Shakur, In 1975, she married Mutulu Shakur and had their daughter, Sekyiwa. They got divorced in 1982. She and her children moved to Baltimore, Maryland in 1984. She raised her children as a single mother and later became addicted to crack cocaine and raised her children through welfare because she could not keep a job. She relocated to Marin County in California to manage her drug use.

Shortly after her acquittal, Afeni worked as a paralegal and tenant organizer for over 10 years at Bronx Legal Services. She gave birth to Sekyiwa Shakur in 1978 and continued to struggle to provide for her family. In 1985, as a single mother, Afeni fell on tough times while trying to provide for her young children, so she relocated her family to Baltimore. It was in Baltimore where Afeni started using cocaine and soon her family foundation began to crumble. Still searching for peace and stability, Afeni moved her family to Marin City, California in 1988, hoping to leave her troubled days behind. There was no stability, Afeni recalls. I was smoking and screwing up my life. Her addiction to cocaine resurfaced and soon she found herself estranged from Tupac, who was at the start of his musical career. Then in 1990, her wake up call was sounded- she had to be told that Tupac appeared on the Arsenio Hall Show. At that point, Afeni realized she was out of control. With the help of God, prayer, family, & good sponsors, Afeni was free from the addiction of cocaine and began to repair her relationship with both Tupac and Sekyiwa.

Afeni took a job as a paralegal working for Richard Fischbein in the Bronx and married Mutulu Shakur, who acted as stepfather to her son and became the father of Shakur’s daughter, Sekyiwa. Mutulu Shakur supported Tupac as his son even after his relationship with Afeni ended in 1982. Mutulu Shakur was an activist in the New Afrika independence movement of the 1960s and later became a prominent drug-detoxification and acupuncture specialist in New York City.

Afeni later described herself as a poor mother, though she was always proud of her son, Tupac, who showed an early promise as a performer and exhibited his mother’s independence. In 1984 Shakur moved her family to Baltimore, Maryland, where her son attended the Baltimore School for the Performing Arts, studying dance and music.

Afeni became addicted to crack cocaine in the early 1980s and was unable to hold a job, using welfare payments to care for her children. She said of this period to Smiley, “When I was on drugs my spirit was dead.” Afeni moved her family to Marin County, California, in 1988 in an attempt to leave her drug use behind. Afeni’s son left in 1989 because of her drug use and had no contact with his family for a couple of years. He started performing as a dancer and “hype man” with the alternative rap group Digital Underground, and in 1991 released the album 2Pacalypse Now, which became a major hit and launched the young rapper into stardom. Afeni Shakur returned to New York City in early 1991 and began attending Narcotics Anonymous meetings. She managed to overcome her addiction that spring, “through the grace of God,” as she told Smiley. Soon afterward she reconciled with her son.

Although she and her son Tupac did not always have a great relationship, he paid her tribute in his song “Dear Mama”.

In the song, he reflected on his upbringing and living with his mother. He expressed his love for Afeni Shakur and her drug addiction troubles, “You was committed, A poor mother on welfare…There’s no way to pay you back, But the plan is to show you that I understand: you are appreciated.” Her revolutionary ideas were reflected in Tupac’s music. Before Tupac died, he arranged for her to receive $16,000 monthly and purchased a home for her in Stone Mountain, Georgia. She was the co-executor of Tupac’s estate.

Exactly one year following her son’s death, with revenue from his albums released posthumously, Afeni Shakur founded the Georgia-based Tupac Amaru Shakur Foundation, which provides art programs for young people, and Amaru Entertainment, the holding company for all of Tupac’s unreleased material.

She was a comfort to many grieving mothers after the death of her son Tupac and traveled across America giving speeches at events. The foundation was sold shortly before her death. She also launched a fashion clothing line, Makaveli Branded. Afeni Shakur was heavily involved in the production of All Eyez on Me, a film based on Tupac’s life.

In 1997 Afeni Shakur created Amaru Entertainment, a company established to handle the release of her son’s posthumous material beginning with The Don Killuminati in 1997 and followed by eight additional albums, a licensed film biography, and several books about her son’s life. In 2007 Shakur signed an agreement with EverGreen Copyrights to release a number of new albums, including remixes of Tupac Shakur’s biggest hits and, potentially, a Broadway show from a script entitled “Live 2 Tell” written by Tupac Shakur.

In 2004 the actress and author Jasmine Guy released a biography of Shakur, entitled Afeni Shakur: Evolution of a Revolutionary (amazon link), which documents Shakur’s early life, involvement with the Black Panthers, and later life dealing with the death and estate of her son. Shakur met Guy, a friend of her son, in 1994 shortly after the first attempt on Tupac Shakur’s life, and they developed an enduring friendship. The importance of the biography to Guy was that Shakur’s life covered a cross section of African-American history from her days in the segregated South, through the civil rights revolution of the 1960s, to the violent street culture associated with rap music during the 1990s.

Afeni Shakur was reportedly in federal court on July 20, 2007, to file an injunction to prevent Death Row Records from selling any unreleased material from Tupac after the company failed to prove that the unreleased songs were not part of its bankruptcy settlement. 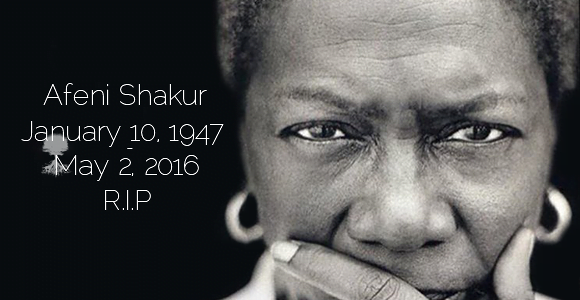 On May 2, 2016 at 9:34pm, police and paramedics responded to Afeni’s home in Sausalito, California. She was transported to a nearby hospital, where she was pronounced dead of a suspected heart attack. She died at age 69. Her body was cremated. Her death was a loss to her community and brought sorrow to many as she was regarded as a mother of many. 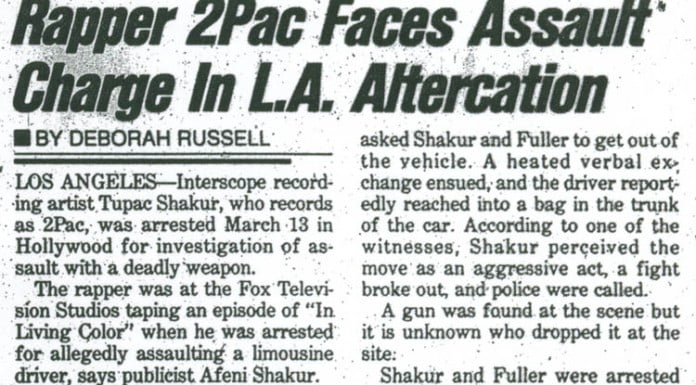