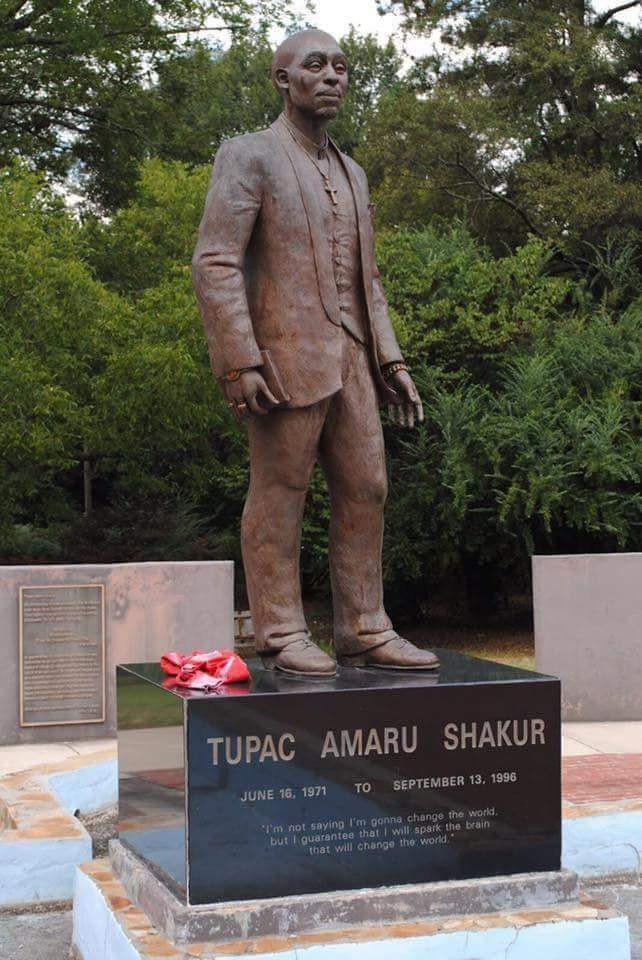 Back in 2017, the businessman Jim Burnett bought the Stone Mountain-located property which belonged to Tupac Shakur’s family. His mother, Afeni Shakur, ran an arts education center for children in Stone Mountain until her death in 2016. The property included a statue of Tupac Shakur and memorial garden.

In a 2017 interview with GPB Radio News, Burnett revealed that he wants to keep the garden going for fans and community members and has commissioned a new statue of Shakur to be unveiled in September.

Here is the full interview with the promises made:

Jim Burnett: Rumor has it that Tupac’s ashes are spread out over the grounds here. Ms. Afeni did a phenomenal job getting everything started. I believe God has blessed me to continue with this park.

Bevington: For the fans of Tupac, what do you hope this garden will represent?

Burnett: Number one, it’s so peaceful out here. Some of the trees that are planted here are planted in remembrance of somebody who’d passed. I had one woman come and say “Can I see my tree?” I said “Who’s it for?” and she said it was for her dog.

Bevington: So this is a place not only to remember Tupac but to remember people whom we’ve lost too soon.

Burnett: Most definitely. We’re going to make sure that it’s a place where people can come. I’m not charging you to get in to come to the park.

Bevington: What do you want the sculpture to look like?

Burnett: We already have the guy who’s already started on it. We want that particular sculpture to look more like Tupac. He will always be remembered. I promised the family that the Shakur name will never die. Because he’s a part of our history and I’m not going to be the one that kills that name as far as this park is concerned.

This area here is a water feature. All of these bricks are from people that have passed. You’ve got in memory of Nina Simone. Lisa “Left Eye” Lopez. We’re going to refurbish this and have this water feature continue.

Bevington: Tell me about the Tupac house.

Burnett: This area is going to be the whole Tupac area. That’s where the new statue’s going to go.

Bevington: Why move the location?

Burnett: This was Tupac can look over the whole park. And just see everything that’s going on. We didn’t want the emphasis to be strictly on Tupac because we’re going to have other fallen stars in this park. Here’s the Tupac House.

Bevington: It’s almost like a cabin that you might have spent time in at summer camp. It’s just plywood with screen windows and it’s one room like a one-room schoolhouse if you’re going to have classes in here.

Bevington: Is the sculpture itself going to be 7 feet tall or will it be 7 feet on top of a pedestal?

Burnett: Exactly. We wanted to make sure people could stand next to it and take pictures.

So it’s 2020 now and we still didn’t had the chance to see a new statue. So, were that empty promises?