It all started when Evans went to the studio to record on ‘Pac’s 1995 track “Wonda Why They Call U Bitch.” She says she didn’t realize that the controversial rapper was signed to Death Row, a record label which was in the middle of a beef with her parent company Bad Boy Entertainment.

Faith Evans: ”One night in October 95, I went out to the Hollywood Athletic Club with some friends. As soon as we get inside, I see Treach from Naughty By Nature. We exchanged hugs and greetings and I introduced Treach to my friends.”, the date was October 13, 1995.

Somebody here wants to meet you,” Treach said. “Who?” I asked. “My boy Tupac wants to say what’s up,” Treach said, gesturing to a table behind him. Before I go any farther, let me be absolutely clear on something. Many people have asked me why I wouldn’t peel off in the opposite direction when I heard Tupac’s name. And the answer is simple: There was no need.

Tupac claims to have had sex with Biggie’s wife Faith Evans during collaborate on a song called “Wonda Why They Call U Bitch”.

Faith Evans: “I went to the studio, I realized there were a bunch of Death Row people there, so kind of in my mind I started figuring it out right there,” she told DJ Vlad.

“I didn’t think that was a good look just because of the fact of the Suge and Puff situation,” Evans continued, acknowledging that she was aware of the tension between the two camps that escalated at the 1995 Source Awards. “Even though I didn’t really know a lot of the details about what happened, but it was clear he took a jab at Puff at the Source Awards and stuff like that. But I was pretty oblivious to the things that had gone on prior to that, until probably a few years later.”

See Also  Why U Turn On Me - Tupac's Handwritten Lyrics 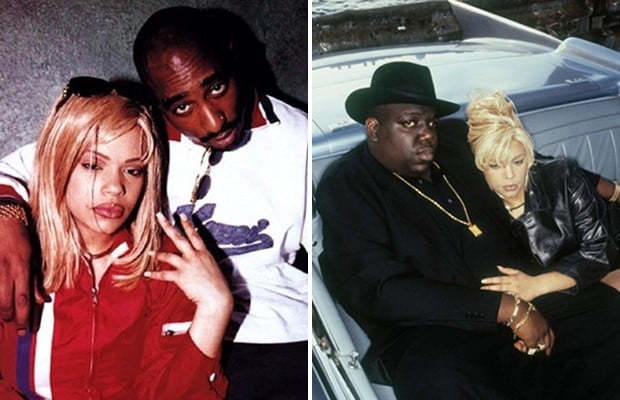 Faith admits that she felt uncomfortable in the studio, but decided to play things cool. When it was time for ‘Pac to pay her the $25,000 she says she was owed, Evans went to the rapper’s hotel to collect. It was there that she says Tupac asked her for oral sex.

“[He asked] in a very surprising and offensive way for sure. By that time it was pretty clear to me, it seemed to me that that was kind of like a plan,” Evans explained.

“I kind of allowed myself to be played and allow myself to get into this situation, because this is totally not how I operate, that ain’t how I do business and that was never up for discussion as far as that being an exchange. That’s not what it was about.”

On June, 1996, Tupac recorded and filmed the most memorable diss track of the East Coast/West Coast rivalry, Hit’ ém Up.

In this song, 2Pac and the Outlawz threaten to kill Biggie, Puff Daddy, Lil Cease, and Mobb Deep; call Lil’ Kim ugly and Biggie fat; and say fuck you to just about everybody and even their mamas.

First off, fuck yo’ bitch and the clique you claim
Westside when we ride, come equipped with game
You claim to be a player, but I fucked your wife

Delray Richardson Talks Tupac Showing Up To The Club With Faith...