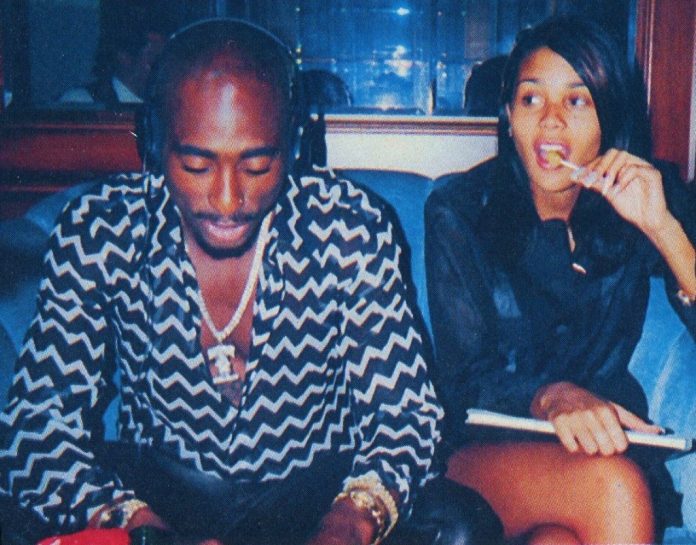 Pac was known for being with a lot of women but Kidada Jones (daughter of world famous Grammy nominated/winner, Quincy Jones) happened to stay with Pac for quite some time. It’s still a long-standing rumour that they were engaged at the time of his death, which I think is true. According to sources, he was on his way to see Kidada the night he was shot in Las Vegas.

I’ve always found their relationship mysterious, but in a non-harmful way. No one, besides Kidada and Pac knew what really went down with their relationship. I just felt like sharing this “short glimpse” due to my admiration for Pac and his artwork. Kidada shares, how her father didn’t like Pac to begin with and how his death had an impact on her. I hope you will enjoy reading this as much as I did.

“Tupac was the love of my life.

My father didn’t like Tupac at first. Tupac said in an interview in the The Source magazine, “Interracial couples. Quincy Jones is disgusting. “All he does is stick his d–k in white b—hes and make f–ked up kids.” That made Daddy mad.

In a 1993 interview with The Source Magazine, the late rapper called out Quincy Jones for his relationships with white women. Actually, that grossly undersells what happened. Pac, in his typically blunt fashion, was quoted as saying “All he does is stick his dick in white bitches and make fucked up kids.”

While Tupac was certainly not the first person to criticize the musician for his relationships with white women, the conversation leapt from the card tables and barbershops of the world onto the the glossy pages of a popular national magazine. Not to mention that Pac directed his venom not only at Quincy Jones, but his innocent childen, including Rashida. 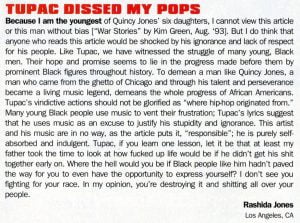 My sister wrote back a nasty letter to The Source and they printed it. Not only that, two white girls in San Francisco wrote letters to the editor that said, “If you don’t like white people, what about when you hung with us?” Anyway, I met Tupac at a club after that and he said, “I want to apologize to you. I didn’t mean that about your dad or you. I didn’t see you as real human beings. Now that I see you…” He was all game. He was trying to get a play, let’s face it, but I liked him. I didn’t tell my dad about it, because I thought there’d be trouble. 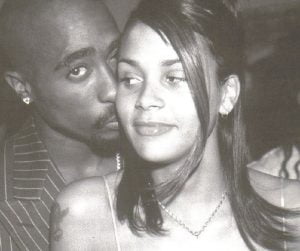 We started dating steadily, and one night Tupac and I were sitting in a booth at Jerry’s Deli in LA and these two hands slammed down on Tupac’s shoulder from behind. We jumped up, and there was Dad standing there. He said to Tupac, “I need to kick it with you for a minute.” This was the first time they’d met, so he took Tupac to a booth and they sat and got real for a long time. They stood up and hugged when it was over and they got along fine from then on. Tupac was excited because him and Snoop Doggy Dogg hoped to do this movie that Dad was producing called Pimp, based on the Iceberg Slim book that every other rapper in America also wanted to do. He never got to it, though. 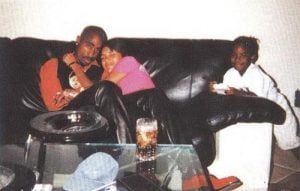 He and I lived together for four months and then he was murdered in Las Vegas in 1996. It was the most horrible thing that ever happened to me.

I knew we should’ve never gone to Vegas that night. I had a horrible feeling about it. I’ve gone over it in my mind a million times. It wasn’t supposed to happen. We weren’t supposed to be there. It was the worst possible thing that could’ve happened –I still to this day don’t know who shot him. I wasn’t able to say goodbye. It’s not something that should happen to anyone.

We were at the Luxor Hotel and he went to a party. He said, “I’m not taking you. There been a fight with a Crip and it’s not safe. So you stay here.” So I waited in our suite for him to come back. I lay down and was going to sleep when I got a call. They said, “Pac’s been shot.”

I was like, “Okay.” He’d been shot five times before that. I said “Where was he hit? In the leg, an arm? No big deal.” When I got to the hospital they handed me a bag of bloody clothes and jewelry and told me, fusions and he is in the ICU hanging by a string.”

I got a blanket from the hospital and circled the parking lot for nine hours. I said, “There’s no way he’s gonna die. There’s just no way.” I walked around there till the sun came up and I had to keep my head down because I felt like I was going to projectile vomit all over the place. I wanted to explode, just come out of my skin. I was in complete physical shock.

My mom was in New York and she flew down to Vegas. Here’s my white Jewish mom, you know, praying with Pac’s family, the ghetto family for real, you know? She’s doing praying sessions with this conjure lady from Tupac’s family who had called me and Tupac just a week before, telling us, “I see Tupac settling in Vegas.”

I said “There’s no way he’s settling in Vegas.”

And then, a week later, he was definitely settled in Vegas. For good. He died at 4:30 P.M. a few days later. For a while afterward, I didn’t want to be alive. I was on my back, literally on my back for months. My father underestimated how that affected me and shaped and molded me as a human being.  In a way, accepting Tupac was his way of acknowledging- my pain, and my struggle to find myself- and for that I love him.“

– The Autobiography of Quincy Jones – get it here