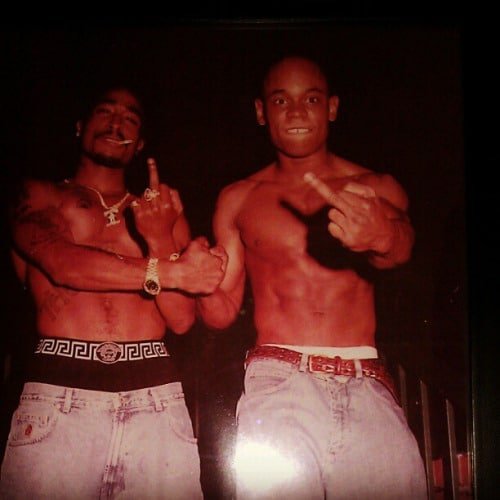 Woodbine says that in 1996, while on set for 2Pac’s “I Ain’t Mad At Cha,” the rapper told the actor his plan to release a unifying song featuring himself and other West Coast rappers as well as The Notorious B.I.G., Mobb Deep and more.

In 1996, just before the legend’s death, Woodbine acted in the video for 2Pac’s “I Ain’t Mad At Cha.” On set, ‘Pac confided in him: he was planning to release a unity record featuring himself and fellow West Coast artists alongside Biggie, Mobb Deep, and other East Coast MCs. “

“He had a plan to put everybody together on one record and just squash the beef,” Woodbine said. “He wanted to take the power away from the labels that were exploiting the situation. It angered him that they were profiting; he wanted to stop the cash flow. It wasn’t something I was supposed to tell people about, you know what I’m saying? I honored that, and I just waited for that record to come out. But unfortunately, as you know, it never did.”
A photo of Woodbine with Pac is included below, with the proposed track going down as one of the all-time what-ifs in hip-hop. In Fargo, Woodbine plays the even-tempered gangster Mike Milligan. He is up against show co-star Jesse Plemmons as well as three actors from The People v. O.J. Simpson for the award.