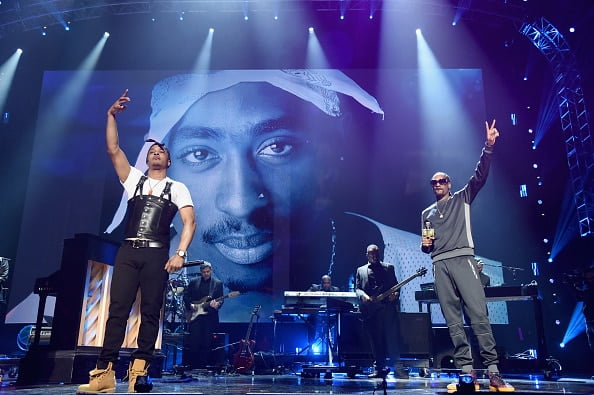 Snoop Dogg: ”I can’t believe it’s been 21 years since we actually got to hear Tupac, not the one clip on YouTube, not the hologram, Tupac Amaru Shakur the human being. Twenty-one years ago, Tupac Shakur was taken from all of us. He was only twenty-five years old, too. Dare me to say that he was gone too soon.

When I sat down to gather my thoughts about my late and great, my homie and my brother there’s one thought that kept coming back: Tupac was actually really good. While many remember him now as some kind of thugged out superhero, Tupac really was only good and he represented through his music like no one before.

It’s the fact that he never shied away from it. He wore it like a badge of honor. With an unapologetic voice, Pac embraced those contradictions that proved we ain’t just a character out of someone else’s story book. To be human is to be many things at once. Strong and bold. Hard headed and intellectual. Courageous and afraid. Loving and vengeful. Revolutionary and – oh, yeah I’m getting fucked up.

So, while we may be here to celebrate one of music’s most prolific and outspoken artists as he’s rightfully enshrined as one of the greatest musicians to ever do it, I’m here to make sure that Pac is remembered the way he would have wanted to be: a strong black man who stood up. Not somebody who acted like a rapper, but as a human.

See Also  Jada Pinkett Sent 2Pac Pictures In Lingerie While He Was In Prison?

After Snoop, Alicia Keys took the stage to perform a collection of Tupac’s hits, including “Ambitionz Az a Ridah,” “I Ain’t Mad at Cha,” and “Dear Mama.”

Snoop returned to the stage after Alicia to perform “Gangsta Party” with YG. Then, 2Pac’s close friend Treach from Naughty by Nature gave his rendition of “Hail Mary.” The pair met back in the early 1990s, when Pac was dancing for the Digital Underground and Treach was touring with Queen Latifah.

Following that performance, T.I. donned Pac’s signature front-tied bandana look and did “Keep Ya Head Up.”