Rap ruses get no better than Humpty Hump. The alter-ego of Digital Underground’s leader Shock G, Humpty’s mythology has him wearing a fabulously-personalized Groucho Marx-style nose to cover up horrific facial scars incurred during a (fictional) accident with a deep-fat-fryer and rapping about randy escapades that, according to lyric lore, took place in a Burger King bathroom. The persona has also been a profitable jape: Humpty’s anthem, “The Humpty Dance,” was a number one pop hit around the world and has been sampled by over 50 other artists– which presumably means that to this day, Shock’s cashing royalty checks from one-time girl-power icons The Spice Girls. With Digital Underground’s final group release, the Greenlight EP, dropping last week, Shock G took time out to pull off the mask and reveal the four people who’ve played Humpty in the public eye over the years, plus tell all about the groupie who insisted on wanting to get busy with Humpty, not Shock.

Unseen photo of Tupac performing with his blow-up doll together with Digital Underground at the Shoreline Amphitheatre in Mountain View, California on August 1, 1991 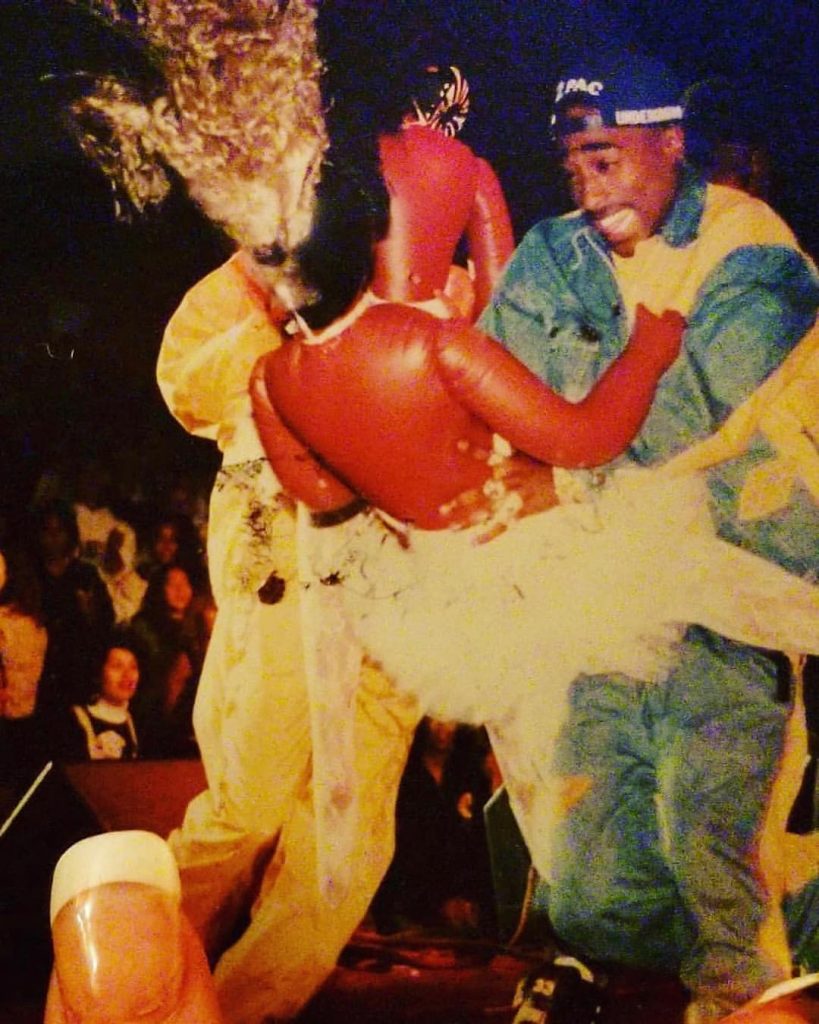 There’s a live version of “Same Song” on the EP. Did you perform both the Shock G and Humpty Hump parts at that show yourself?

That was at a KMEL summer jam, in 1991 at the Shoreline Amphiteater in Mountain View. My little brother Kent Racker, who’s a rock guitarist, doubled as Shock G on that show so we could pull the double-act off on stage. Kent is the one who was dressed in the Shock G robes, the zebra print and the African-style kufi hat with the dark sunglasses. He walked out on stage with a dead microphone lip-synching the first verse. I’m back-stage dressed as Humpty Hump with a live mic, rapping the Shock G lines: “I came for the party/ To get naughty/ Get my rocks on/ Eat popcorn…” Kent’s walking around on stage pretending to rap them. Too $hort and people who swore that they knew me had bought into me being Shock G on stage at that point, but then Humpty walked out–it fucked their heads up!

Obviously Kent didn’t sing nothing for the rest of the show, but he was on stage walking around. With 2Pac and Money B running interference, no one figured it out. To this day, those 60 or 70,000 people at that Summer Jam still argue about whether it was the real Humpty or not.

Did Kent ever perform as Humpty on other occasions?

Yeah, he was there in that movie with Dan Aykroyd, Nothing But Trouble, plus when we [Digital Underground] performed the “We’re All In The Same Gang” song on the Arsenio Hall Show with Eazy-E and Tone Loc and them. But at that time he was Humpty, cause he could pull the Humpty voice off. If we both had to have live mics then it was better to let him be Humpty. His diction wasn’t totally like mine so real fans could tell something was different. But when I was Humpty and Kent was Shock G, everybody bought that as Humpty.

Did anyone else ever play Humpty?

There were four Humptys ever. Michael Webster, an artist who draws for a living in Oakland, looked enough like me to play Humpty. He was Humpty on the cover of B.A.M. [Bay Area Music] magazine, and also in the 8×10 glossy of Digital Underground that Tommy Boy used to circulate in the first two years. One of his upper two teeth was a little darker than the other one–that’s the only one you can tell, cause the nose covers up so much and then there’s the clothing. Also, in some photos I was Humpty and Kent was Shock G cause he didn’t have to do anything but stand there.

In the “Humpty Dance” video, when Humpty would walk by Shock G, that was Rod Houston, the video rep from Tommy Boy who happened to look enough like me. So that’s three different Shock Gs and four Humptys.

Who was the fourth Humpty?

I don’t remember his name, but it was my ex-wife’s boyfriend! I was married around that time, from about ’91 to 96, and my wife, Melissa, had a high school sweetheart who was still around and remained friends with her. He was trying to do music and wanted to be cool with me– he couldn’t believe that his little Melissa married Shock G! But the guys in the group, like Money B and 2Pac, they used to joke that not only was he wearing the Humpty outfit but he was gonna be tapping Melissa again! They’d be like, ‘Shock gon’ come home and find Humpty fuckin’ his wife!’ They were all cracking up. I mean it was risky letting my wife’s ex-boyfriend be all in the limo with us, but to this day I don’t believe anything happened.

How many Humpty noses do you have left?

I might have a few in my closet ready to go, but they’re all Caucasian. They don’t make the brown one any more. I don’t make the serious Humpty kit any more. The most at once was six: four gold and platinum and two regular brown ones connected to glasses. These days I paint the nose the day of and sometimes even the hour of the show. I use Sharpies and different designs depending on where we’re playing–I might put a Playboy bunny on the side if we’re playing the Playboy Mansion, or I might put HH on the side like the Gucci logo, the double letters. I have a lot of fun with it now; I don’t take it as serious as I used to with having a case with a variety of noses inside. I just stop at the costume shop or the party store of that city and get some Sharpies and fix it up. Sometimes I’ll draw stripes, sometimes make it blue, or if it’s a more serious show I’ll go with acrylic paint and then a clear coating on it to lock it on.

But they don’t even make ’em good any more. They used to make ’em connected to the stern Woody Allen-type glasses, but now it’s the cheaper, bendy glasses. The slightest pull and the ear-thing pops off. So I buy ’em, tear the mustache off, pop the ear-strap, whatever, and rest it on my nose and put a real pair of glasses on to lock it to my face.

What happened to the gold and platinum noses?

Do you ever give the noses out to the crowd at shows?

Yeah, after each show I give the new pair out with whatever night it was, like it might say ‘Spring Break ’99,’ ‘Happy Birthday 2Pac,’ ‘R.I.P. Guru.’ I always ask if anybody needs a souvenir from the show and the first hand to reach the sky, I make sure they get it. Even if it’s someone right at the back, I’ll be like, ‘Her in the blue, get her towards the stage.’ There’s always one hand that’s distinctive and that’s who gets it. So I figure I have between 500 and 1000 Humptys out there. One day I’m gonna put the word out and get the Humptys to unite. It’ll be an army of Humptys!

Did you ever meet any groupies who insisted on the Humpty nose being part of the experience?

Yeah, once, and it was a big joke in the clique. It was the night after we played Drexell’s Class, which was a sitcom that was kinda like a less popular Cosby Show. Digital Underground were the featured guests. The episode took place on a cruise ship and we were the entertainment on the ship. Also on the cruise were the Sports Illustrated models. That’s the plot. So after the show wrap we all got to know each other, everybody had girls– the girls were mostly actresses playing Sports Illustrated models. We all wound up shacking up with certain ones.

The one coming home with me is real pretty. I’ve already spun all my schtick in the club, already rapped to her, already took pictures with the nose on, so I’m assuming that’s all dead in the water. Now it’s private, just me and her in the room. It’s getting touchy-feely, we’re making out in the bed, she rolls over on top of me and she looks up at me. I pull her in, her shirt flies off, I get her bra, I reach for her panties and she says, ‘Wait! Put the nose on.’

I’m like, ‘Ha ha, stop playing!’ I pull her in again and start playing. She’s like, ‘No, I’m serious, don’t touch my underwear or even my hip area.’ So I get up, go get the nose, put it on, look at her and go [in a Humpty voice] ‘Yeah!’ I could see in her eyes that she was melting down to me at that point. She’d go as far as I wanted to after that. She actually wanted to have sex with Humpty!

Did the rest of the group find out?

Yeah, when I told them the next day they were cracking up, man: ‘Humpty fucked one of your chicks!’ I didn’t think it was that funny, but they laughed double hard. I wish I never told nobody.

So that was the only time you got busy as Humpty?

Yeah, no other girls ever took it that far. They might ask me to do the voice a little, but nobody else wanted to keep it going into the bedroom. That could officially be the only time Humpty’s ever gotten laid. Although I have heard about cats at shows masquerading as Humpty and luring chicks to their rooms that way. And I might have been drunk or at a rave and maybe gone with a quick zip-your-pants-down type thing. But yeah, that time the girl insisted was the only time Humpty took some ass from me.