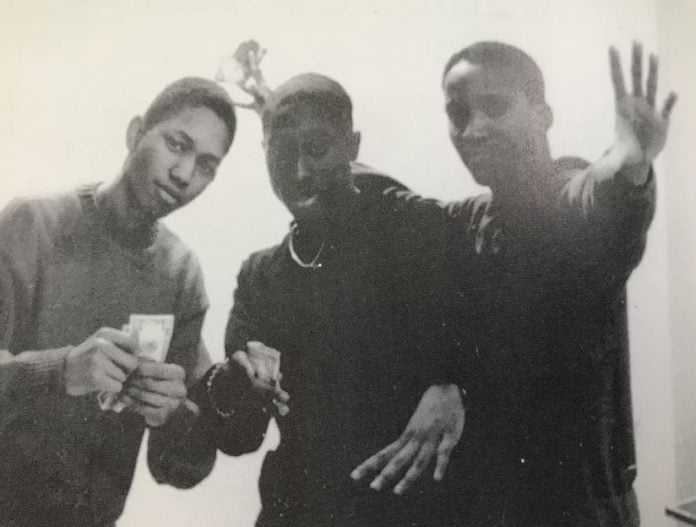 What Was 2Pac First Song?

A quick online reference would show you that Tupac released his first studio album in 1991. That year, the sensational 2Pacalypse Now hit the market, strengthening the young and promising rapper’s position on the West Coast scene, and paving the way for more future projects.
Before that, however, Tupac had worked on the project “Same Song” with Digital Underground, and they had used his vocals as part of the soundtrack to the movie “Nothing but Trouble” by director Dan Aykroyd, a grotesque comedy featuring Demi Moore.

However, few people know that these were not Pac’s first steps in the hip-hop industry. The truth is, the future rap legend makes his first recordings when he lives on the East Coast, in an apartment on Greenmount Avenue, Baltimore, together with his mother Afeni and his sister Sekyiwa.

During his time in Baltimore, Tupac attends Roland Park School, and his music tastes are already hip-hop oriented. At this time, rap music was not yet the global pop-culture phenomenon that it would become, but more and more young people in the United States were growing fond of the relatively new genre.

While studying in Roland Park, Tupac meets Dana “Mouse Man” Smith, Gerard Young, and Darrin Keith Bastfield, and the four close friends create the “Born Busy” group. This is the first rap project in which Tupac is involved, and it is with Born Busy that Tupac makes his first recordings.

The first two songs that the rapper records with Born Busy are called “Babies Having Babies” and “Check It Out”. Both tracks are in collaboration with Mouse Man and are part of the first demo tape of the future rap music legend. Pac and Born Busy record several more songs in 1988.

Tupac’s first recordings are preceded by a curious moment in 1985 when the Enoch Pratt Library notices the growing popularity of hip-hop music. The library organizes a rap competition for a best song, offering a financial prize, and an opportunity for the finalists to perform their songs in front of an audience. Tupac notices the flyers, and he and Mouse Man form the band The East-Side Crew and join the competition.

The two present to the public their own song, “Library Rap”, urging citizens of Baltimore to get their library cards and children to stay in school. 2Pac and Mouse Man win the contest, and to this day the original Tupac manuscripts with the lyrics of the song are kept in the library, alongside manuscripts of figures such as H.L. Mencken and Edgar Allan Poe. A woman named Deborah Taylor, who still works at the Enoch Pratt Library, remembers Tupac to this day. “When he was on stage, you just couldn’t take your eyes off him,” she recalls.