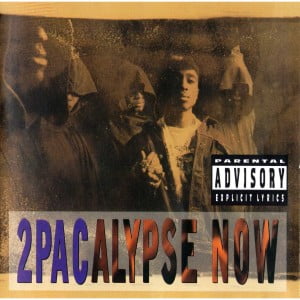 Review : 2Pacalypse Now, the great debut release, is probably 2Pac’s most raw political album. He addresses social issues such as police brutality, poverty, teenage pregnancy, and drug abuse with the anger of a young black male.

It is hailed by many critics and fans for its underground feel, with many rappers such as Nas and Talib Kweli having pointed to it as a source for inspiration from the album. Although the album was originally released on Interscope, Amaru Entertainment, the label owned by the mother of Tupac Shakur, has since gained the rights to it. The album’s name is a played-on title of the 1979 film Apocalypse Now, which is about the Vietnam War.

This album was strongly criticised by politics and the media. Vice president Dan Quayle believed ” that this album has no place in our society”. It didn’t help this album’s image when it was found in the tape player of a young black male who shot and killed the police officer who pulled him over. The male was at the time listening to Souljah’s Story; one of the songs where 2Pac raps in detail about killing cops.

This album showcases all of the elements of 2Pac’s nature that he later focused on at various stages in his life and career. ‘Brenda’s Got A Baby‘ and ‘Violent‘ highlight 2 extremes of his complex character: Sadness in circumstances and raw vengeful anger driven by a need to survive.

This album was produced along with his friends from Digital Underground.

The record never achieved the same success as many of Shakur’s later albums owing in part to rough construction and sometimes repetitive beats, but it was important in showcasing Shakur’s political conviction and lyrical talent. It featured three singles, “Brenda’s Got a Baby“, “Trapped“, and “If My Homie Calls“.

See Also  How Many Albums Had Tupac Managed to Record Before Dying?

2Pacalypse Now can be found in the Vinyl Countdown ad in the instruction manual for Grand Theft Auto: San Andreas along with the track “I Don’t Give a Fuck” which appeared on the in-game radio station, Radio Los Santos.

“This rap’s so straight from the heart that I did it in one take, one burst.”

“Trapped”: “We’re trapped in our own ghettos and some people are braggin’ about it! White people can go anywhere except the ghetto and we can’t go anyplace but the ghetto. Who do you think has the best of that deal? It doesn’t make any difference if your hair is permed or braided or in dreads, if you’re in the ghetto then you’re trapped.”

“Brenda’s Got A Baby”: “A true story. A family in New York died when they left the gas on because they were so cold — except for a 12-year-old girl. She then went to stay with a cousin who molested her and got her pregnant. She had the baby on the bathroom floor before she went to school! Then she threw it in the incinerator. Fortunately, someone saved the child. But reading that story, the pain really shook me.”

“Violent”: “My enemy is the police. They’re like the cop in Terminator 2 — globs that can take any shape. They call themselves Officer Friendly but they’re out on the street kicking motherfuckin’ asses. The song just vents my frustrations.”

“If My Homie Calls”: “I’ll always stay true to my homies. The show can wait, the movie can wait. Because your homies are the ones who stay true.”

“I Don’t Give A Fuck”: “Digital Underground got jacked by the San Francisco Police Dept., they put guns to our heads. Right after getting nominated for a Grammy: ‘Shut up or we’ll blow you away!’ Two hours later, I’m in a studio session and this is what came out. I’m talking some true shit here.”

“Something Wicked”: “In case anybody thinks we always need samples, I wanted to show how we’d make it with no samples at all. We got a beat and just rocked it.”

“Rebel Of The Underground”: “I’m a rebel. I’m always the one talking the loudest and getting arrested or thrown out of someplace.”

“I’m a rebel. I’m always the one talking the loudest and getting arrested or thrown out of someplace.”

“The Lunatic”: “That’s my nickname in the underground, big ‘U’ and little ‘u.’ Everybody’s got a character and a nickname. I guess I got this one because mine is a personality that can flip at any second.”

“Part-Time Mutha”: “This is the flip side of records glorifying dope dealin’ and free sex. This one’s about a friend who freaks for a 10-piece and how his son is so ashamed of him he becomes a stone cold killer. And a mother who’s so blinded by love of this dealer she’s not listening when her daughter tells her she’s been raped. And how a one-time stand leaves a man with baby and how it changes his life. He too is a part-time mutha.”