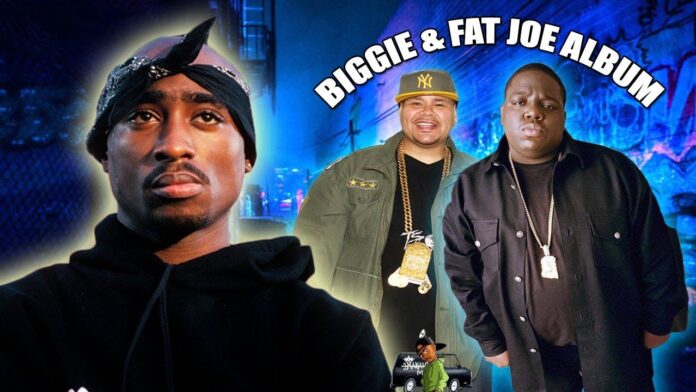 American rapper Joseph Antonio Cartagena, better known as Fat Joe, revealed that he and Biggie Smalls had worked on an album together before the latter was assaulted and murdered in LA. Joe sat down in an interview with the founders of Verzuz – Swiss Beatz and Timbaland on “The Art of Dialogue” Instagram podcast, to give a bit of insight on how it all came through.

Better known for his work with other rap greats like Lil Wayne, Busta Rhymes, etc., Fat Joe explained that he and The Notorious B.I.G had also come close to putting an album together. Many people probably wouldn’t have been cheerful about it however since the main topic was non-other than another rap great – Tupac Shakur. To make matters worse, the songs in the said album weren’t planned to flatter Pac’s name.

Joe recalls both men showing their mutual respect for one another, whilst working on an album that may never actually be heard by both man’s loyal fans. The American rapper did explain the reason behind the fact that no one has ever heard anything about the project – the songs were mainly aimed at dissing Tupac, who at that time had his fair share of bust-ups with Biggie Smalls.

In the interview, Joe goes on to explain that both men had finished 5 songs together, which could be proven by Puff Daddy, who witnessed the entire process unfold. Fat Joe, however, acknowledges that releasing the album was never an actual possibility. Both Tupac and Biggie would be killed soon after and Joe admits that it would be a low blow to both men’s legacies had the album ever been introduced to the wider public eye.

Although we’ll probably never have the chance to hear the compilations of Biggie and Fat Joe, the latter will undoubtedly never forget the opportunity to work with one of the all-time hip-hop legends.

2PacLegacy - October 3, 2022 0
We decided to select Coursera courses that may be interesting and useful to people working with sound: musicians, composers, and sound engineers, both experienced...