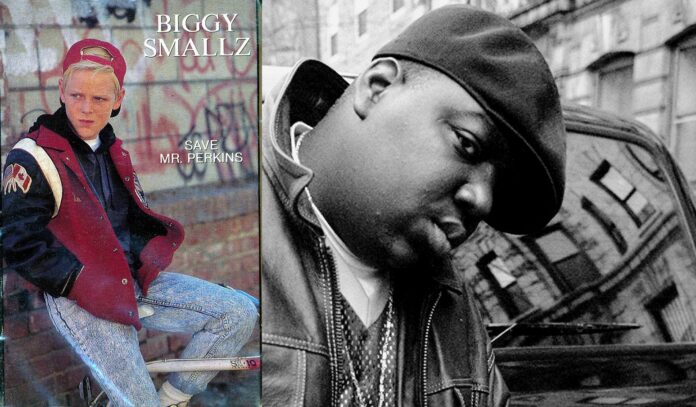 Who Really is Biggy Smallz / Biggie Smalls? The Story Behind One of The Most Common Names In Rap

I’m pretty sure most of you wouldn’t have many second thoughts if ever questioned on who’s the first person that comes to their minds by the name of Biggie Smalls. The great rapper certainly made the moniker a certified part of music history, but it wasn’t always this clear cut. It turns out that quite a few members, working in the world of rap music, had also laid claims to the name. What’s even more interesting is that all of them were connected in some way.

The Notorious B.I.G really burst onto the scene in the early 1990s. At that time he was only recognizable by the name of Biggie Smalls, under which he would release his first demo in 1990. Little that he knew that name was already taken by a rapper, about whom most of us probably know incredibly little.

The West Coast already had another artist with a very similar name – Biggy Smallz, real name Tim Bigelow. His story is mostly covered with mystery, but what is known is that he was also associated in one way or another with Tupac. Smallz only ever managed to release 3 songs, two of which were produced by the producer Johnny J, who was also part of Shakur’s entourage. It’s believed that Pac acted as a mentor to young Biggy and even tried to play his part in giving the up-and-coming rapper a fair shot at fame.

Rumors have it that as The Notorious B.I.G.‘s career was starting to take off, Pac went to Johnny J with a request regarding BIG’s name. To that point, he was known by the mass public mainly as Biggie Smalls, far too similar to the upper-mentioned Biggy Smallz. Shakur asked for Biggie to change his rap moniker to The Notorious B.I.G and so he did. Others say that lawsuits were filed against Christopher Wallace (a.k.a BIG) for using the name Biggie Smalls, which might have played a part as well.

Regardless of Wallace changing names, his popularity in the world of rap had already sky-rocketed, meaning that everyone would refer to him as Biggie Smalls. Even though Biggy Smallz managed to ride off of the wave, caused by the B.I.G’s album “Ready to Die”, released in 1994, his popularity never grew exponentially, and he never managed to really gain any meaningful fame. Smallz would remain with just those 3 songs to his name – “Save Mr. Perkins”, “Cruisin”, and “Nobody Rides For Free”.

Biggy Smallz was murdered in 1994 outside of a liquor store and he left behind only a handful of tracks that’s been released and available to the public. Being close to Tupac, the legendary rapper decided to give Biggy a shout-out in his song “God Bless the Dead”, which was recorded in 1994 but released after Pac’s death.

Since people knew preciously little about Smallz, everyone thought the song was dedicated to Wallace. That caused confusion because Pac had been murdered a few months before Biggie’s untimely death and the topic had to later be cleared up by people close to Tupac.

The story with the name “Biggie Smalls” doesn’t quite stop there, however. One of Pac’s producers – Big D the Impossible, would also be referred to by Shakur as “Biggie Smalls” in some interviews. Deon ”Big D The Impossible” Evans passed away on October 20, 2015 in Los Angeles at the age of 45.

Seems like “Biggie Smalls” was quite a familiar name in the world of rap fin the 90’s. In the minds of the fans, however, there will only be a place for only one Biggie – The Notorious B.I.G.