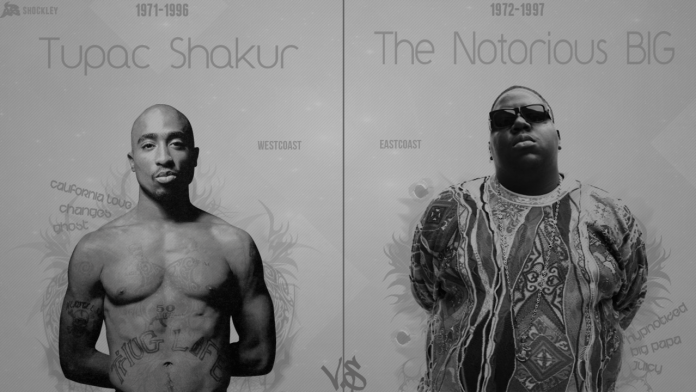 It’s not about East or West

It’s about niggaz and bitches, power and money,
riders and punks. Which side are you on?

Believe it or not, the two rappers most envolved in the fued between America’s ‘East vs West Coast’ feud, were actually good friends in their earlier days! Before the two rappers started violent lyrical fueds, and public denouncements of one another resulting in much violence between the two coasts these two artists have performed together (left) and also supported each other off stage as close friends!

The fued between the two coasts as we assess it started off when the friendship of 2Pac and the Notorious B.I.G begun in 1994, Tupac supported BIG as an artist, assisting BIG in his struggling career to be known as a rap star, and they made some tracks such as the now famous “2Pac & Biggie – Runnin”. They met pretty often, having dinner at Tupac’s house, or just hanging out. Tupac helped Biggie, he introduced him into Thug Life, supported him on tracks and on stage as the picture above, and even bought Biggies first rolex watch.

The ‘beef’ between the pair came towards the end of ’94. Trouble really began when Tupac was shot 5 times on November 30th, 1994 at 12:20 a.m. It set the grounds for his beef with Biggie, Puffy and Badboy Records as a whole. He was shot 5 times in a recording studio in Times Square. Tupac believed not only the shooting, but also the infamous ‘rape’ case was part of a setup from Bad Boy Records and its affiliates. The setup in the shooting seemed to run hand in hand with the rape case Tupac was going through at the time of the shooting.

This is where the beef between Tupac and Badboy originally began. Tupac never directly blamed Biggie or Puffy in the shooting, but they were his friends, and they never warned him, and he believed they knew about the planned attack on Tupac’s life. After he went to prison they never visited him and as Tupac said, they ‘abandoned’ him and ‘tried to take his position’. While Tupac was in prison he said he thought about giving up rap all together. He said the reason he didn’t was the fact that they were trying to ‘dirty up his name’ and take away everything he’d worked for. When 2Pac was shot in the Manhattan Studio in NY, he claimed that Biggie was aware that the shooting would take place, but failed to give him full information. Their friendship was later worsened when BIG released an album that Tupac said was remarkably similar to 2Pac’s upcoming album, which resulted in Tupac re-recording the entire album. ‘Pac also mentioned that Biggie was “rapping about my life” when he was rapping about the cash, jewelry and assets he did not really have. BIG even began to dress like 2Pac. This can be reffered to in 2Pac’s track “Hit em up”, a vicious denouncement of Biggie Smalls and all Bad Boy Records affiliated artists. Tupac says “Now its all about versace / You copied my style / 5 shots couldn’t drop me / I took it and smiled”, the Outlawz also diss Biggie on the same track with lines like “a B-writer / Pac style taker / I’ll tell you to face,you ain’t nothing shit but a faker.”

Tupac now had serious reasons to beef with Bad Boy Records and was clear to show his anger in his lyrics – “If you wanna be down with Bad Boy, then fuck you too!..” again in the song ‘Hit Em Up’. Tupac was born on the East Harlem section of Manhattan in New York City, which is classed as been on the ‘East Coast’, and The Notorious BIG was from Brooklyn, also East Coast. However when Tupac moved to the West Coast he claimed this as his ‘side’, and his now West Coast record label ‘Death Row’, as his home. Many people from Tupac’s block, saw this as Tupac forgeting were he came from. Then a virtually unknown rapper from the East Coast ‘Chino XL’ said in underground tracks that Tupac was raped in jail, among other things. Tupac adressed the rapper with one line in Hit em Up, not wanting to promote the rapper by mentioning him anymore than that.

From now on the beef between Death Row and some East coast artists and record labels was born. Snoop, 2Pac, the Death Row camp, and other Westcoast rappers dissed Bad Boy artists and the East, they lived the Cali way on. Strech Walker, a long time friend to Pac (who was with 2Pac when he was shot but didn’t help him, he just dissappeared) changed sides to become Biggies Sideman, which again made more reasons for this beef to be more about ‘coasts’ more than anything else.

Pac accused Puffy of making Mainstream MTV Hip Hop, mainly because puffy didnt write his own lyrics and was fake ‘G’. Exactly one year to the day after the NY shooting, Strech was shot, and rumours quickly spread that it was revenge for Pacs shooting in 1994, because Strech didn’t help. In reference to Strecth’s betrayl to Tupac, Tupac says in the track ‘Ambitionz az a ridah’, “Had bitch ass niggas on my team, so indeed they wet me up”. In ‘Against All Odds’ he says “and to that nigga that was down for me, rest his head, switched sides guess his new friends wanted him dead”, refering to Stretchs murder. Tupac believed not only the shooting, but also the rape case was part of a setup by many artists and people affiliated with Bad Boy Records and the East Coast.

After years of public denouncements and verbal assaults from Tupac to the East Coast rapppers and Biggie Smalls the so called beef between the two artists was escalding out of control, and was resulting in much violence between the two ‘coasts’, and many lyrical and public attacks from Tupac to Biggie, his crew, and all of Bad Boy! On September 7th 1996 the coast war reached its peak of disaster as 2Pac was shot in a gangland stlye drive-by shooting in Las Vegas, and died days later in hospital! Then on 03-09-1997, Biggie was shot in an nearly identical way Pac was and also died as a result of the shooting!

So in a short time their friendship had turned into not only their own beef ’2pac vs Biggie’, but also a ‘East vs Westcoast’ beef, and ‘Death Row Records vs Bad Boy Records’ beef, resulting in too many deaths, and the death of the two ex-friends, who were, and maybe still are Hip Hops greatest talents, at the young ages of 25 and 24, respectively! R.I.P.