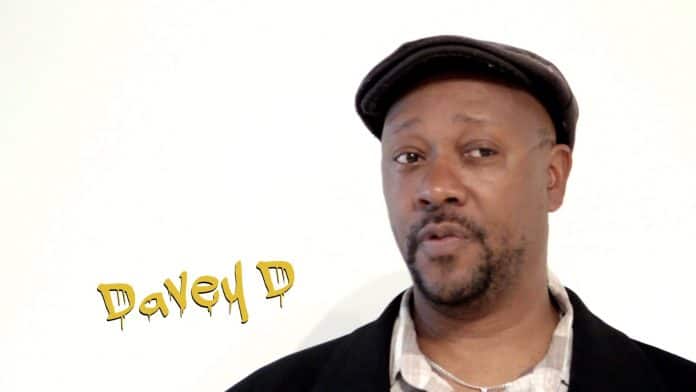 One of the most interesting and intense interviews, I’ve ever conducted was with Tupac Shakur.. He had just hit it big with the movie Juice and and everyone wondering was he just acting or putting forth his real life persona in the movie.. Although I had known him for a couple of years it was hard for mne to tell.. cause he had a loaded gun on him as we spoke…If I recall it was a 38….Pac explains in this interview his then recent encounter with the Oakland Police Department which resulted in him getting beat.

Currently Pac is out on bail after serving part of a 3 year prison sentence in upstate NY. He’s now with Death Row Records and has just released an lp entitled ‘All Eyes On Me’. Needless to say this ;p has blown up. This early interview with 2Pac lends some incredible insight to how he was before all the trouble he’s in now started happening.. Enjoy….
Davey D…3/96

Excerpts of this Interview are taken from Davey D’s Hip Hop Archives…Much of this originally appeared in the KMEL Beat Report Newsletter.

Tupac Shakur considers himself the ‘Rebel of the Underground’ [Digital Underground] and for good reason. He stirs things up and does the unexpected. Such a person is bound to generate excitement because they have impact on both the people and situations around them. 2Pac in 1992 promises to have major impact in the world of hip hop. He’s kicking things off with a sensational acting debut in the movie ‘Juice‘ where he stars as the character Roland Bishop. His debut lp ‘2Pacalypse Now‘ is beginning to cause a bit of a stir on retail shelves around the country. And if that’s not enough Tupac is branching out and signing new acts to his production company including his older brother Moecedes who raps in the Toni Tony Tone song ‘Feels Good. I recently had the pleasure of interviewing this outspoken and very animated individual at his apartment where he told his tale.

Davey D:Give a little bit of background on yourself. What got you into hip hop?

2Pac: I’m from the Bronx, NY. I moved to Baltimore where I spent some high school years and then I came to Oaktown. As for hip hop-all my travels through these cities seemed to be the common denominator.

You lived In Marin City for a little while. How was your connection with hip hop able to be maintained while living there? Was there a thriving hip hop scene in Marin City?

2Pac: Not really..You were just given truth to the music. Being in Marin City was like a small town so it taught me to be more straight foward with my style. Instead of of being so metaphorical with the rhyme, I was encouraged to go straight at it and hit it dead on and not waste time trying to cover things…In Marin City it seemed like things were real country. Everything was straight forward. Poverty was straight forward. There was no way to say I’m poor, but to say ‘I’m poor’…

How did you hook up with Digital Underground?

2Pac: I caught the ‘D-Flow Shuttle’ while I was in Marin City. I’m referring to the album ‘Sons Of The P’ It was the way out of here. It was the way to escape out of the ghetto. It was the way to success. I haven’t gotten off since… Basically I bumped into this kid named Greg Jacobs aka Shock G and he hooked me up with Digital Underground…

What’s the concept behind your album 2Pacalypse Now’?

2Pac: The concept is the young Black male. Everybody’s been talkin’ about it but now it’s not important. It’s like we just skipped over it.. It’s no longer a fad to be down for the young Black male. Everybody wants to go past. Like the gangster stuff, it just got exploited. This was just like back in the days with the movies. Everybody did their little gunshots and their hand grenades and blew up stuff and moved on. Now everybody’s doing rap songs with the singing in it.. I’m still down for the young Black male. I’m gonna stay until things get better. So it’s all about addressing the problems that we face in everyday society.

What are those problems?

. You refer to yourself as the ‘Rebel of the Underground’ Why so?

2Pac: Cause, if Digital Underground wasn’t diverse enough with enough crazy things in it, I’m even that crazier. I’m the rebel totally going against the grain…I always want to do the extreme. I want to get as many people looking as possible. For example I would’ve never done the song ‘Kiss U Back’ that way.

Can talk about your recent encounter with police brutality at the hands of the Oakland PD?

2Pac: For everyone who doesn’t know, I… an innocent young black male was walking down the streets of Oakland minding my own business and the police department saw fit for me to be trained or snapped back into my place. So they asked for my I-D and sweated me about my name because my name is Tupac. My final words to them was ‘f— y’all’ . Next thing I know I was in a choke hold passing out with cuffs on headed for jail for resisting arrest. We’re currently letting the law do its job by taking it through the court system. We had to file a claim. We’re in the midst of having a ten million dollar law suit against OPD. If I win and get the money then the Oakland Police department is going to buy a boys home, me a house, my family a house and a ‘Stop Police Brutality Center’.

Let’s talk about the movie ‘Juice’. How did you get involved?

2Pac: Money B had an audition for the movie. Sleuth [road manager] suggested I also come along. I went in cold turkey, read, God was with me…The movie is about 4 kids and their coming of age.It’s not a hip hop movie. It’s a real good movie that happens to have hip hop in it. If it was made in the 60s it would’ve depicted whatever was ‘down’ in the 60s…My character is Roland Bishop, a psychotic, insecure very violent, very short tempered individual.

What’s the message you hope is gotten out of the movie?

2Pac: You never know what’s going on in somebody’s mind. There are a lot of things that add up. There’s a lot of pressure on someone growing up. You have to watch it if it goes unchecked. This movie was an example of what can happen…In the movie my character’s, father was a prison whore and that was something that drove him through the whole movie [this aspect was deleted]. It just wrecked his mind. You can see through everybody else’s personality, Bishop just wanted to get respect. He wanted the respect that his father didn’t get. Everthing he did, he did just to get a rep. So from those problems never being dealt with led to him ending four people’s lives.

Do you intend on continuing making movies?

2Pac: It depends on whether or not there are any good parts. I want to challenge myself.

What is your philosophy on hip hop? I’ve heard you say you don’t to see it diluted?

2Pac: Well when I said that, it made me think. It brought me to myself. Now I have a different philosophy. Hip Hop when it started it was supposed to be this new thing that had no boundaries and was so different to everyday music. Now it seems like I was starting to get caught up in the mode of what made hip hop come about. As long as the music has the true to the heart soul it can be hip hop. As long it has soul to it, hip hop can live on.

What are your plans for the next year?

2Pac: To strengthen the Underground Railroad. I have a group and a program called the Underground Railroad…The concept behind this is the same concept behind Harriet Tubman, to get my brothers who might be into drug dealing or whatever it is thats illegal or who are disenfranchised by today’s society-I want to get them back into by turning them onto music. It could be R&B, hip hop or pop, as long as I can get them involved. While I’m doing that, I’m teaching them to find a love for themselves so they cxan love others and do the same thing we did for them to others. Right now we’re twenty strong. The group is going to be one that constanly evolves. The people that are in the UR are coming from all over, Baltimore, Marin City, Oakland, New York, Richmond-all over.

Is there anything else we should know about Tupac?

2Pac: Yeah, the group Nothing Gold is coming. My kids are coming out with a serious message…NG is a group coming out that I produce.. All the stuff I say in my rhymes I say because of how I grew up. So to handle that, instead of going to a pyschiatrist, I got a kids group that deals with the problems a younger generation is going through. They put them into rhymes so its like a pyschology session set to music. It’ll make you come to grips with what you actually do.. If you’re a black man, you’re going to really trip out cause they really call you out and have you deal with them…NG will make us have responsibilty again. Kids are telling you to have responsibilty…

The Reasons Why We Should Study Tupac Shakur as a Political...