He is interviewed several times, both at the show and the party afterwards.

Well, according to Tupac he did not lose. “Oh no I didn’t lose, cause I sold six and a half million copies, so I won,” Tupac said during a sit-down interview with Snoop Dogg for MTV News after the completion of the awards show.

The VMA after party was held at Bryant Park and was the location for the infamous Tupac and Nas face off. Thankful the meeting between the two Hip Hop icons ended peacefully as cooler heads prevailed. Speaking to Ebro In The Morning in August of 2020, Nas reflected on the infamous showdown. “We had a great convo. He explained that he thought I was dissing him on the song ‘The Message’,” Nas said. “Last person I was even thinking about when I wrote that record.”

Prior to running into Nas, Shakur gave his last on-camera interview where he elaborated on his plans for Death Row East. “We plan to take the same strategy we use with Death Row West, which is mind over matter, taking all our weakness and making it to our strengths,” Tupac explains. “We already run the streets out here. So now we’re gonna help some of these brothers get their money on, cause we know they got talent.”

Master T who interviewed Tupac on this particular night spoke with Entertainment Report Podcast. As Master T explained the interview was completely spontaneous, but when Suge Knight was asked if MUCH could interview Tupac, Death Row CEO was all for it.

This wasn’t the first time Master T had seen Tupac in person. “I seen him before. I seen him at the Def Jam Soul Train Music Awards party,” revealed Master T. “Tupac was standing with two girls in his arms. Suge Knight is carrying Method Man out, he was drunk. And, Tupac was standing there so put off like ‘This is not how you act’.”

Master T was is in total awe of Shakur despite everything that was going on at the moment. Never would he image that seven months later he would conduct Tupac’s last on-camera interview. “Its a weird position to be in, because I remember I had to announce on my show that he is no longer with us.”

Tupac talks about One Nation after the MTV awards

”Master T: Can we talk about Death Row East , what exactly is happening. What can we expect from it?

Tupac Shakur: Do you believe in God?

We plan to take the same strategy we used with Death Row West, which is mind over matter; taking all our weaknesses, and making them into our strengths. And numbers…We already run the streets out here. So now we just gonna help some of these brothers get their pimp-paper on, cause we know they got talent. And we got the ways to make them use their talent, to the maximum effect. And that’s what it’s about. Everybody raps – we don’t rap. We rap to make money, we do business. Ain’t no other record company out there, that sold as many records as we did. We outsold Bad Boy, LaFace, every black record label out there we outsold them, and in one year! And I’m a convict and my homeboy just got off a murder case, so that tells you that it’s pure talent. No hype, we don’t got no all-american smiles, they don’t even wanna buy our records – but they gotta buy our records cause we represent the streets.

So Death Row East, is gonna be a personification of what we did on the West Side, we gonna do it to the East Side. We gonna prove once and for all, that all these people talking about a East Coast West Coast war, they like what Judas was to Jesus. They only here to cause confusion. We here to bring money, and to bring change, they here to bring confusion. All these weak rappers…Nas, and all these suckers they’re battling off East and West like it’s a game. This ain’t no game! If this was chess, we’d be yelling checkmate three motherfuckin’ years ago, cause we been beatin these motherfuckas. It’s not a game!

We out here trying to help our people make money, we trying to get out of this three strike, circle they got us in and start gettin our paper on. So that’s what we’re doin – by strength in numbers we coming to the East Coast to prove there is no fear, there is no problem; there ain’t nothing but opportunity and opportunity is, overthrow the government y’all got right now which is Bad Boy, and Nas, and all that bullshit – and we will bring a new government right here that will feed every person in New York.

Later in the night Tupac and Nas come face to face and clear the air about any pending beef. 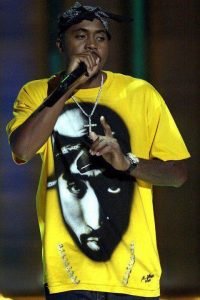 Shortly afterwards, the two rappers and their accompanying crews met each other at Central Park during the 1996 MTV Video Awards. Nas grabbed Tupac by the back of shirt and surrounded him with 40 people in his entourage.  Tupac resolved their beef and promised to remove all the disses aimed at him in his upcoming album “The Don Killuminati: The 7 Day Theory.” There are varying accounts on what was actually said and who stepped to who first, but the bottom line is that Nas and Pac managed to hash out their differences and squash their beef.

Nas: ”What [Tupac] said to me was, ‘Me and you are brothers. Me and you are never supposed to go at it. But I heard you was dissing me on mixtapes.’ I’m like, ‘I heard you was dissing me on this new Makaveli album. We both knew we were supposed to continue that conversation and probably just squash the whole thing. I was scheduled to meet him in Vegas; you and Jimmy Iovine called me at 4AM and told me he might not make it.”

Snoop Dogg: “…there was a story even more gangsta than that…Him(Tupac) and Nas. It was so gangsta. This was prequel to me meeting Angie Martinez for an interview…MTV had the Award show at Central Park, so Tupac and all of us from Death Row, we mobbing…we see Nas…He (Tupac) walked  up to nas…nas had about a hundred goons with him that I see, that I know that they killers, but pac aint tripping and he just don’t care, so he walk up to nas…nas reached out to shake pac hand, and nas say ‘I got love for you pac’, and pac said, ‘well nigga, if you got love for me, I got a song coming out where I dissed you, Jay-Z, Biggie…’ He named like about 40 niggaz…he named a bunch of niggas, and he told nas, ‘if you got love for me, you aint gon say nothing after this record come out.’ Nas shook the nigga hand and looked over his shoulder…he had about a hundred niggaz with him, all them niggaz had their hands on their shit (guns). He did them niggaz like this…like he winked his eye…like don’t do it. And he shook pac hand and he said I love you pac, and they separated. And then pac looked at me (on the way back) ‘I told you, nigga, we got these niggazs…we got this niggas punked out here’. But to me, nas was gangsta, cos he didn’t push the light…He could have pushed the green button, and we’d have been done, cos we didn’t have no artillery in New York and they did.”

Tupac and Snoop Dogg  Fall Out

After appearing on New York’s Hot97 radio show Snoop states he has no problem with Notorious B.I.G. This later in the day causes a blow out between Tupac and Snoop Dogg at the hotel. The friendship never get repaired.

Snoop Dogg: ”We had just left New York. I had gotten off the HOT 97 radio station with Angie Martinez. That’s when me and him clashed, because she asked me on the air, ‘How do you feel about Diddy and Biggie?’ And I said what I felt. ‘They my homeboys. I love ’em.”
“After Tupac perceived that Snoop had betrayed him by siding with Puffy and the The Notorious B.I.G.., with whom Tupac was beefing, Snoop’s interactions with Pac completely changed. “When I got back to the hotel, it was a whole ‘nother atmosphere, like he sent his homeboy to get the bud from me as opposed to him coming to get it from me. …So I felt funny… When I got on the plane to go to LA the next day, Suge Knight didn’t let none of my security ride with me. I had to ride on the plane with him, his homies, and Pac. And it was the most uncomfortable ride I had in my life, because my nigga didn’t say nothin’ to me the whole ride. That’s a five-hour flight on a private plane.”
“At one point, Snoop actually feared for his life on the flight. “I walk up to him, maybe three hours into the flight, sit next to him like, ‘Yo goin’ to Vegas, cuz?’ He turns [away from me], starts talkin’ to somebody else. I’m like, alright, go in the back, put the blanket on my head, knife in my hand, fork in my hand, and just sleep the rest of the ride, because I feel like they finna try to do something.”
“When we walk out…I’m like, ‘Cuz, you goin’ to Vegas?’ He do me like [dismissive gesture]. He went his way, I went my way. Next time I get a call, niggas like, ‘Turn on the news! Turn on the news!”