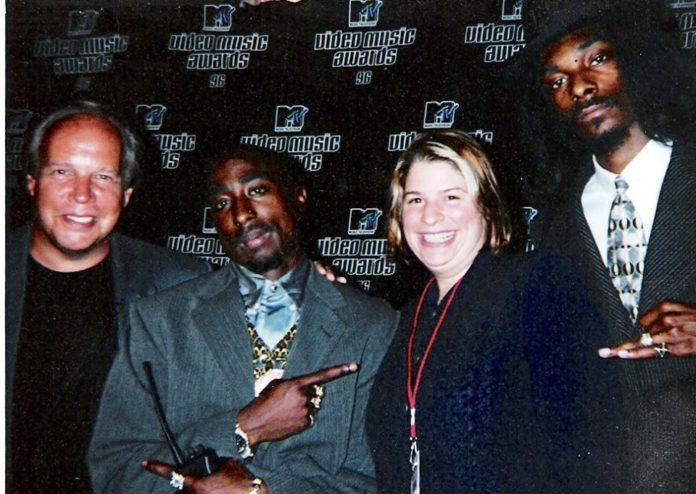 Mark Scheerer: “The story behind the picture is that there is no story. Tupac Shakur and Snoop Dogg were just posing with me and my extraordinarily talented talent booker and producer at CNN, Shari Mesulam. It’s at one of the countless awards shows I covered for ABC News and CNN. Little in the way of actual news comes out of the backstage area of these TV specials (Grammys, MTV VMAs, etc.) but many, many grip & grin photos are captured for posterity.”

“At a quick glance, you might think Mr. Shakur and Mr. Broadus are throwing gang signs at Shari and me, but a closer inspection shows Tupac is just pointing out the pasty-faced ones in the picture and Snoop appears to be modeling some bling on freakishly long ring- and pinky-fingers.”

“You’ll also notice my hand on Tupac’s shoulder in a gesture of close friendship that I had no business making. I am beginning to see why a friend of mine, Debbie Ward, has a thing about hands on shoulders in group photos. Drives her crazy. Whenever she sees it — or is herself taking or posing in a shot of two or more people — she raises a holy stink: “No hands on shoulders! Hell-LOW!””

1988-06 Tupac and his family moved to Marin City, California

Hussein Fatal – In The Line Of Fire (Official Album)

Tha Dogg Pound – U Remind Me

2PacLegacy - January 23, 2022 0
You’ve probably all been in the situation, where a life-long friend, with whom you’ve shared nearly everything for years, turns out to be one...