In a recent interview for The Art Of Dialouge, Michael Hoover, who worked with the legendary DJ Pink House, shares his untold story of the day that Biggie and Tupac went on stage together in Chicago.

At the beginning of the interview, Hoover speaks on the concert and how all the artists started showing, pointing names like Kanye West, which was 17 years-old then, still unknown for most of the people. Hoover admits “I didn’t really pay attention to Kanye West”. “I was on the stage, with everybody that preform”.

Michael then mentions moment that he will never forget “I will never forget when Biggie was performing/ He just held his hand out to the audience and the girls just gone crazy, grabbing his hand and all of that” Hoover says he was right next to B.I.G. when he was interviewed that night. 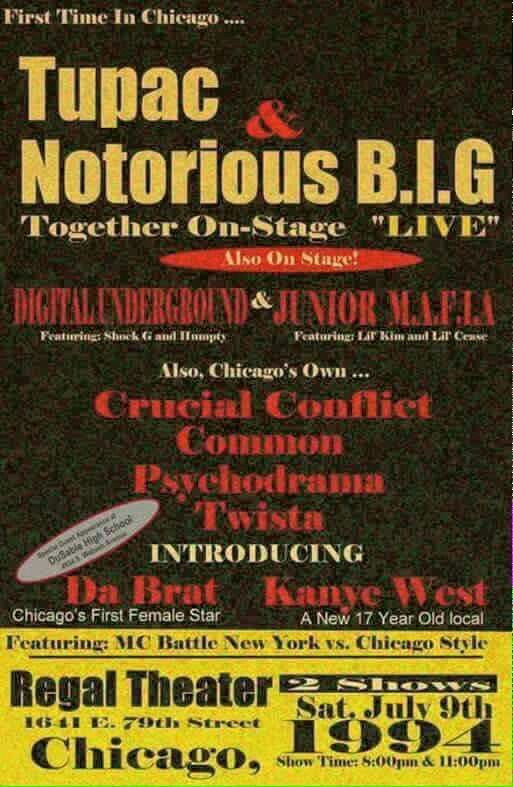 The next moment revealed from the interview is when Tupac came in. Hoover was set to pass flowers to Pac, sent from a female fan, touched by one of Pac’s songs – Brenda’s Got A Baby.

Moving on with the story, Michael continues: “Pac was the last performer. When Pac already on stage, all the security was like – everybody gotta clear the stage” “I was on the stage during that time and he /security/ said “Yo Pac who are with you?”.  Then Tupac looked at Hoover and some other crew members “he knew I wasn’t with him but he made me part of his crew, he let me stay on the stage…so that was EPIC dude, for him to let me stay” Michael says.

Next moment that was pointed by Hoover, is the moment when he and Tupac started walking to the hotel, after the show was already over. “Pac was like – let me have somebody take me to the fucking hotel man so…Pac jumped off the stage and START WALKING WITH ME”

“Those boys won’t jump of the stage behind him like “Yo Pac, you can’t go out there man” /outside the theater/ Pac was like: Man fuck this, that’s my people G, they my people I ain’t worry about that man”

“We walked out there so one of these dudes like “That’s Tupac” he tried to grab the scarf of Pac’s head and when he did smacked Tupac in the head real hard” “I will never forget the face Tupac made”.

Hoover continues: Äll the security came out, boom rush all of us, they grabbing Pac, grabbing Pink House, they like “He’s the driver grab him” so they grabbed me”.

Michael describes the after party in the hotel room with 2Pac as one of the most memorable nights that he could ever remember.