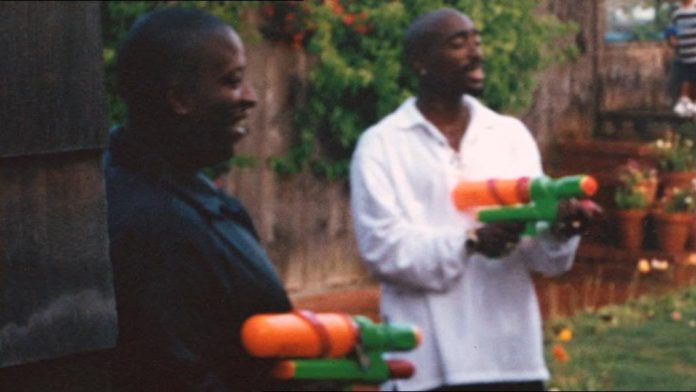 The first day I met 2Pac was at the Malibu beach house Suge was renting from the assistant DA of LA ( talk about a fucked up situation). 2Pac wanted to meet me cause he knew I was Tracy Robinson’s partner. Since he planned on working with her and knew I was in the picture he wanted to size me up.

Molly Monjauze (PAC’s day to day assistant) was the one that took me to meet him. When I got there Afeni, Pac’s cousin Jamala and some kids were inside the house. I’ll never forget hearing Afeni say to someone “where’s my weed?”. Outside in the backyard 2Pac and the Outlawz were in a full on water pistol fight with each other. Molly introduced me to 2Pac. He sized me up and shook his head with a “what’s up?” and “so you’re Tracy’s partner I’ve been hearing about”.

Then Molly ran in a gave him the phone saying “it’s Suge”. Immediately 2Pac went intoyo where’s my money at?”. The conversation got heated, 2Pac put his water pistol on the table next to me and walked off. The outlawz continued their water gun fight. I sort of wanted to get into the action so I started messing with Pac’s gun.

The next thing I knew all the outlawz started shooting at me and I was in a full fire fight with them. They surrounded me and did their best to out number me into submission, but I didn’t give up. After a few minutes of this, 2Pac broke into the circle and yelled “ that’s what the fuck I’m talking about. You niggaz outnumbered this motherfucker but he didn’t give up. He kept fighting. This is a krayze eyeranian”. From that moment, that became my moniker and I fucking loved this guy that I had just met. He saw something in me that no one ever had before. He recognized the fighter in me. I miss him and his no holds barred approach to life.”

Gobi Rahimi is a producer, director and writer with over 250 credits in music videos, commercials and interactive media for the web.

The Story Of How Tupac Recorded ”California Love”

Interview: The Last Days of Tupac In The Hospital Through The...