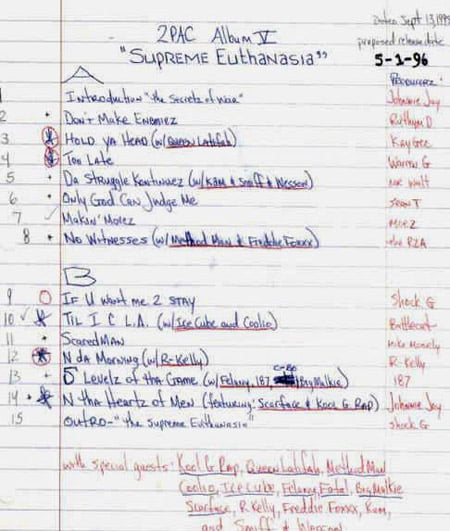 On September 13, 1995, Tupac wrote the tracklist of ”Supreme Euthanasia” from the prison.

Supreme Euthanasia“ („eu“ means „good“ ; „thanatos“ means „death“) was the first name for the album All Eyez on Me. 2Pac was in jail, planning to collect songs already recorded for an album called „When I Get Free“. After signing in on Death Row, he started to plan new album first titled „Supreme Euthanasia“ and then „Euthanasia„.

Below, you can see the cover of a bootleg called „Euphanasia“ that contained demo versions of All Eyez on Me. This bootleg could eventually be an intermediate state between Euthanasia from jail time and AEOM with a modified acceptable name („ph“ being alteration of the pronunciation of Greek letter „th“).

The Bootleg we tried to gather here is made of new songs 2Pac recorded when he was out from jail, in the end of 1995 and beginning of 1996. These are “All Eyez on Me“ Sessions.