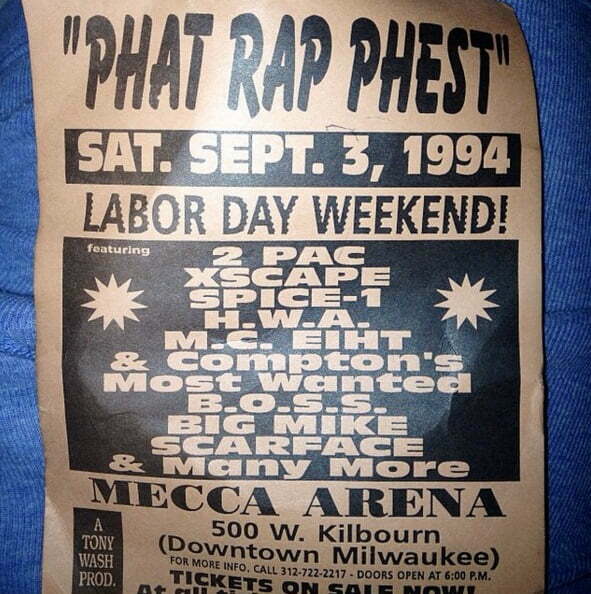 On September 3, 1994 at the Mecca Arena in Milwaukee, Wisconsin, a concert took place that included BOSS, Big Mike, Xscape, Spice 1, Scarface and more, including the headline act, 2pac.

2Pac performs a concert at the Mecca Arena in Milwaukee.
1 of 4
2Pac: The Day He Went Over The Edge
1 of 3

Underneath an article from a magazine entitled
“A Photo Tribute To Tupac”. This article was
written by Raymond Body

What Happened Was Chilling

After all the acts had done their thing, which included an appearance of MC Eiht with Spice 1, which really got the crowd pumped, it was time for 2pac and the crowd was ready–or were they? To the roar of “2pac” and “THUG LIFE,” he hit the stage with vengeance, opening with a track called “Bury Me a G” from the new Thug Life album. But he seemed like a man out of control. Midway through the song, his mic started fading in and out. And while Thug Life were doing their verses 2pac was running around trying to get his mic to work. Finally, he got a working mic and all hell broke loose in Milwaukee. Half way through the second song, 2pac stopped the show for a “moment of silence” for the 14-year old girl killed in Chicago by an 11-year old boy (who was later killed himself.) But before the “silence” began 2pac yelled out: “You better stop killing those babies or else I’ll murder you myself!”

He Was Out Of Control

I sat with my camera in hand wondering, Where did that come from? But I didn’t have time to think about it for long. 2pac was now yelling: “I taught you all about harming those babies. Keep it up and I’ll murder all you muthafuckas.” With that I started looking around the arena to see if anyone else was a shocked as I was. They were. Then I started thinking that it must be a skit or something in the act. But then I looked in his eyes. I was very close to the stage and I realized that this wasn’t a skit. 2pac was serious. Before he could get to his next song, the audience started throwing coins at 2pac, and he wasn’t gonna take that. No way. “I don’t know who the fuck you all think I am. You muthafuckas better stop throwing shit at me!” He then offered a 200 dollar reward for anyone to bring an offender to him on stage and said: “He will get you paid, but he will die tonight.”

Again, I was shocked! Where was all this coming from? Did a coin tossing incident cause this violent reaction? But what came next was even worse. People in the audience started throwing up gang signs at 2pac and taunting him. That did it. “You can flash them gang signs if you want,” screamed 2pac, “but I’ll kill all you muthafuckas! This is Thug Life!” Then he invited people to come on stage and try to “kick my ass!”

Things Were Definitely Out Of Control

Thug Life rushed on stage to be with 2pac and I started thinking that this looked like a scene from West Side Story and when I thought it couldn’t get worse, it did. A shouting match occurred with a guy in the pit (great, just where I am). A member of Thug Life and this guy just kept at it. Suddenly the guy threw a cassette on stage and then a water bottle was hurdled at him, missed and hit someone else in the audience. 2pac grabbed the mic stand like a sword and started daring people to come at him. Chaos was erupting all around me and then it happened. A member of Thug Life pulled a gun. The photographer next to me said, “Let’s get out of here.” And he didn’t have to tell me twice! As I gathered my gear I kept glancing at the gun that was being held at his side. 2pac announced he would continue his show for the “real G’s,” but people now were beginning to run. Some for the exit, other, who were gangbangers, to the stage to challenge 2pac and Thug Life. I began to run as well and it wasn’t toward the stage.

Shots were fired from the stage, but luckily no one was hit. Police started entering the arena and the Mecca security tried to guide the people out so they wouldn’t get trampled. I was glad to be out of there safely, but I felt I had to find out what happened. Later I interviewed the Chief of Security, Sgt. Delroy Roberts, who told me that the police had to kick in 2pac’s dressing room door. They made everyone kneel with their hands behind their heads as they searched the dressing rooms. They found two semi-automatic weapons. No one admitted to knowing about the guns.

As I was leaving, people who had been in the audience were saying, “What was wrong with him?” “Has he snapped?” “We all could have been killed!” And we could have! I was shocked and saddened. Why did this happen? I had just witnessed another chapter in the troubled life of Tupac Amaru Shakur.

But Where Will All This End?

This was the end of the story I wrote when I reported this incident. Now we know the answer to my final question. It ended badly and sadly. Personally, I liked 2pac. Having met him once in Chicago, I found him to be very pleasant and corporate as I took photos and interviewed him. I sincerely liked the guy. So I wanted to hear his side of what took place in Milwaukee. But a call to his manager’s office informed me that the office was no longer representing Mr. Shakur. And that was the last time I had contact with the late Mr. Shakur.