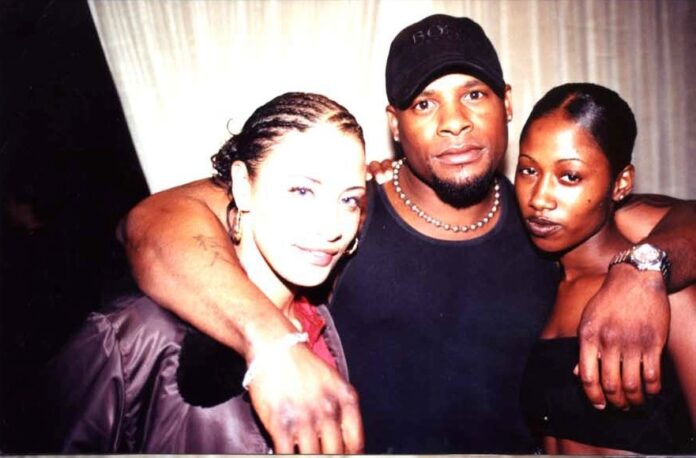 It’s Los Angeles, 1995, winter, and a friend told me that Tupac Shakur was a fan and wanted to meet me.

I’d been aware of Pac for years and was a huge fan of his.

Who is Mr. Marcus?

So here I was heading into 1996 tracking down an ex-girlfriend who I knew hung around with Pac. To find out if it was true. I didn’t want to get all hyped up for nothing. I needed confirmation. Once I found her, she reached out to Pac for me, and next thing I knew I was paging Tupac Shakur.

I SAW ROGER TROUTMAN COME OUT OF A BACK ROOM, AND I HEARD MC HAMMER WAS SOMEWHERE IN THE BUILDING. I WAS OUT OF MY LEAGUE.

He hit me back almost immediately: “Let’s meet up.”

It took about a week of going back and forth to find the best time to meet, but we finally did. El Torito in Sherman Oaks.

Pac came strolling in a few minutes later with two plainclothes cops right behind him. I assumed they were there for security reasons. His energy lit up the room when he saw the girls and smiled.

I ordered a few drinks, thinking we were going to stay awhile and talk, but before I knew it he was like, “Let’s roll to the studio. Got drinks and smoke there.”

So we left El Torito and headed to the parking lot. Tupac walked over to a station wagon with wood paneling on the side. It was an early ’80s Buick, and as he reached for the driver’s side door I thought that maybe he needed a wagon for the security team or that he must not have received his royalty checks from Death Row Records.

He knew what I was thinking because when he grabbed for the door on the wagon, he turned and started laughing.

He walked over to a shiny black Mercedes-Benz SL500 convertible. He looked over at the girls and pointed to Obsession.

“You’re riding with me.” And with a big grin he hopped in the Benz and peeled off, security following in their car and the two girls with me following in mine. We watched the Benz swerve in and out of traffic down Ventura Boulevard, top down, music loud. I had finally met Tupac Shakur, and he did not disappoint.

When we got to Death Row’s studios, security came out and escorted us in. People were sitting around rolling joints, music was loudly pumping and Pac headed back, with us following. Someone walked into the room with a Tupperware bowl of weed. It was the largest bowl Tupperware makes, filled with green nuggets of “chronic,” and blunts were rolled, lit and passed around.

I never smoked the same blunt twice, because when one was rolled and passed on, it was never seen again. As smoke filled the air, another Tupperware bowl was brought out loaded with ice and bottles of champagne. Tupac was the party, and the party was getting started when in walks Snoop Dogg, fresh from court, and behind him was Suge Knight.

I sat next to the studio engineer and watched. The girls were sitting on a couch, pouring drinks.

“Johnny J., give me something to write to,” Pac said to the engineer.

Johnny pulled out a shoebox full of digital audio tapes, or DATs, and popped one in. A beat came on. Tupac started bouncing to it.

“Give me something else.”

I thought the beat was perfect for a Thug Life recap, but Pac wanted something different, so Johnny put on another.

Johnny went into his shoebox and pulled out another DAT. “All right, how about this?”

Pac was bobbing his head and looking around for a pen and paper. He sat down for a minute and started writing. After a few verses, he stopped.

“If ya’ll wanna get on this beat, be ready to go when I’m done recording my verse.”

I noticed everyone was writing. Especially Star. Pac noticed too and started laughing and told her she could go next. She gave him a half-nervous smile and went back to writing. I took a hit off a blunt that was passed my way and followed it up with the drink Thug Passion. The vibe was next-level, and I was feeling it.

Then Pac went into the booth and recorded his verse in three takes: one to lay in his verse, like a rough draft; the second for punch-ins; the third for the hook and to smooth out the track. When he came out he looked around the room.

He looked over at Star. She nodded and hit the recording booth. The beat bounced off the studio walls as she started laying down her rap one verse at a time. She took a little longer than Pac, but he coached her the entire time, telling her where to slow down, encouraging her to ride the beat, smiling when he heard a clever phrase.

After Johnny felt he had enough to cut together a solid verse, he told Star she was good and as she walked out of the booth I gave her a drink and a high five. It was time to go, and Pac talked about heading to Hollywood while Johnny was playing back the song they’d just recorded. I saw Roger Troutman come out of a back room, and I heard MC Hammer was somewhere in the building. I was out of my league, but I was also the biggest fan there, taking it all in.

Later that year, when Tupac was murdered, I remembered that night. I had experienced music history. A few months after Pac’s death, the streets were flooded with unreleased Tupac music: the legend was that it took him only an hour to record a new song. Now those songs were hitting the mixtape market, and people were scooping them up.

And I had Tupac playing every day all day. One day I came across a song that sounded familiar. It wasn’t on the radio but buried on a Tupac mixtape. That’s when I heard her voice, our girl Star, rapping with Tupac. I called Obsession, who called Star, who screamed. It was proof it had happened, and that one day in January 1996 we partied with Pac. We had no pictures, just memories. And a song.

Does the story tell about the day of the ”Ride 4 Me” recording?

The Story Of How Tupac & Big Daddy Kane Recorded ”Too...