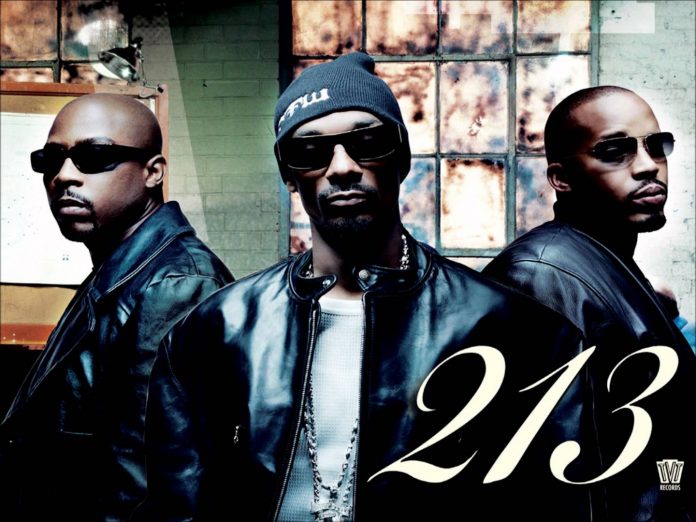 It begins at the dawn of the ’90s, a couple years before Dr. Dre unleashed The Chronic. At that time, Snoop (born Calvin Broadus), Warren (Warren Griffin III), and Nate (Nathaniel Hale) were young and unknown yet talented and aspiring artists from Long Beach, an outlying neighborhood of Los Angeles. Snoop and Warren rapped while Nate sang the melodies and hooks, and inspired by Richie Rich’s 415 group from the Cali Bay Area, the trio named itself after its own area code, 213.

In particular, Warren was the most enterprising member of the group and kept trying to turn his half-brother, the one and only Dr. Dre, on to 213. It was a priceless connection, and liking what he heard, Dre invited the three to join his then-burgeoning Death Row Records camp. Snoop got most of the attention, initially starring alongside Dre on “Deep Cover,” a big 1992 hit that set the stage for the Doctor’s Chronic album later that year. Of course, that album became a gargantuan success, in commercial as well as artistic terms. Snoop became an overnight superstar, and both Warren and Nate soon shot to stardom themselves on their hit duet “Regulate.”

Ten years later Snoop remained atop the rap game, one of the few perennial superstars — not only a recording artist but also a popular touring artist, Hollywood actor, boutique label owner, and media personality. However, the success Warren and Nate enjoyed with “Regulate” had simmered over the years.
Both maintained lukewarm solo careers but couldn’t get a good break. Then came a one-off collaboration between these three former group mates: “So Fly,” a mixtape freestyle send-up of Monica’s hit single “So Gone.”

The song became a surprise radio and underground hit in summer 2003 and quickly led to an album deal with TVT Records.
Over a decade after three of the West Coast’s top rap artists — Snoop Dogg, Warren G, and Nate Dogg — broke up their 213 trio and pursued respectively successful solo careers, they reunited for a long-rumored, much-anticipated supergroup album, The Hard Way.