Search
Home News Hopkins: Pac Never Wanted To Hate New York, But He Got Nothing...
Advertisement

On the “Art of Dialogue,” Youtube channel Hopkins rubbished claims about Pac always being volatile towards the town, pointing out that for many years the rap legend was very much fond of NY and never wanted to show disrespect.

Jermaine however added that for all the love that Shakur showed for the city and its people, he got nothing in return and never even received the minimal amount of respect, that was warranted.

Hopkins says that Pac never openly dissed New York when speaking with those close to him, but the tipping point came about when the famous artist’s jewelry was stolen during the shooting of the movie “Juice”, in which Hopkins also played a role.

Jermaine remembers that Shakur couldn’t get over the fact that he got robbed in a city, which he hadn’t disrespected in any way prior to that.

See Also  New York Drug Dealers Wanted To Kill 2Pac & Mike Tyson, Because They Was Messing With Their Women 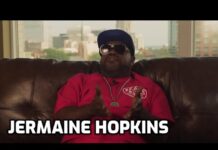 Jermaine Hopkins: Tupac Would’ve Been More Valuable As An Activist, Rather Than An Actor

Kobane: Death Row Gave Tupac Great Power And It Was His Downfall