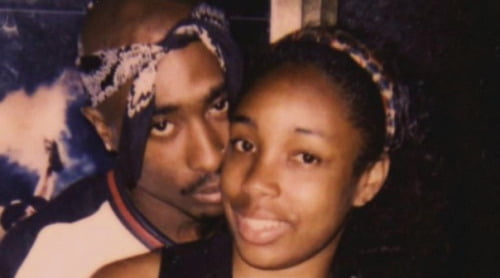 July 7, 1994, Friday, she (Keisha Morris) woke up early, left him a note, and kissed him (Tupac) on the cheek. He flew back to Atlanta and left eight messages on her answering machine. She went on a camping trip to Pennsylvania for a week so she couldn’t call him. She tried to find a phone to see if there was any message from him. When she came home she found his message.

She decided to fly to Atlanta and paid for it herself. He was impressed and said, “I never had a girl pay for anything on her own.” She went down there and they had a great time. He performed at a club called the Vixen in Atlanta. He wanted to wear shorts with a Hilfiger and Keisha told him to wear some Calvin’s with a tank top and a vest and a pair of motorcycle boots. He said, “Oh, you’re trying to make me look sexy.”

The only thing Keisha really wanted to do was go to Six Flags. Tupac said, “Oh, it’s going to be difficult.” She met Afeni and his family. They had cookouts, and he cooked barbeque chicken. He loved it, macaroni and cheese, orange soda, and Chinese apples (pomegranates). He would have Keisha searching to buy a hundred of them. She would start dinner and he would say, “Come on, Keisha. Move! Get out of the way. You did enough.” She was going to stay for the weekend and go back on Sunday. On the way to the airport, they went in his low rider. He didn’t know ho much gas he had, and they ran out. She missed her flight. She stayed a day later, and they went to Six Flags.

They would run through the park trying to get to rides. Tupac loved to ride roller coasters. They had a good time, but it started to rain so they had to leave. Then she flew home. He said that he was going to New York to see her next. He went on tour. In August he did a show in Hawaii. When he came back he called Keisha everyday, five times. He sent her a dozen roses one day while she was at work.

When she got home she paged him. He called back and she told him she got the roses. He called her and told her he bought her something. He said he wrote her a poem and to guess what the present was. It was about time. She didn’t get it and said for him not to tell her what it was. He said, “I can’t help it. It’s a watch.” When he came back he gave her the poem. He bought her a card and gave her the watch. They had matching ones from Gucci.