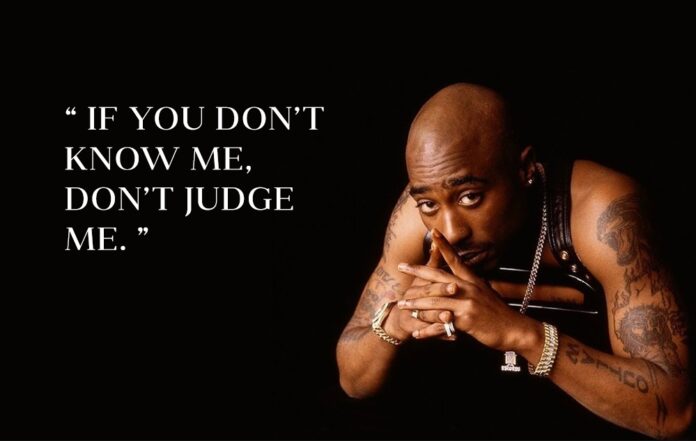 Tupac inspired millions of fans around the world, even after more than 20 years he died. We have selected a few dozen of his memorable quotes. Throughout Tupac’s life and after his death, his music, poetry, and messages left an indelible imprint on society. He was the greatest rappers of all time.

“A coward dies a thousand deaths. A soldier dies but once.”

“There’s gonna be some stuff you gonna see thats gonna make it hard to smile in the future, but through whatever you see, through all the rain and the pain you gotta keep your sense of humor. You gotta be able to smile through all this bullshit…remember that.”

“I don’t see myself being special; I just see myself having more responsibilities than the next man. People look to me to do things for them, to have answers.”

“I think I’m a natural-born leader. I know how to bow down to authority if it’s authority that I respect.”

“I know it seems hard sometimes but remember one thing. Through every dark night, theres a bright day after that. So no matter how hard it get, stick your chest out, keep ya head up and handle it.”

“It’s a struggle for every young Black man. You know how it is, only God can judge us.”

“I just don’t know how to deal with so many people giving me that much affection. I never had that in my life.”

“All I’m trying to do is survive and make good out of the dirty, nasty, unbelievable lifestyle that they gave me.”

“When you do rap albums, you got to train yourself. You got to constantly be in character.”

“Somebody help me, tell me where to go from here cause even thugs cry, but do the Lord care?”

“The only thing that comes to a sleeping man is dreams.”

“We all gonna die, we bleed from similar veins.”

“I feel like role models today are not meant to be put on a pedestal. But more like angels with broken wings.”

“If God wanted me to be quiet he would’ve never showed me what he does.”

“I am society’s child. This is how they made me and now I’m sayin’ what’s on my mind and they don’t want that. This is what you made me, America.”

“I don’t have no fear of death. My only fear is coming back reincarnated.”

“There’s nobody in the business strong enough to scare me.”

“With all my fans I got a family again.”

“Of course I’m going to say “I’m a thug,” that’s because I came from the gutter and I’m still here!”

“I’ve been shot five times but I’m still breathing, living proof there a God if you need a reason.”

“If we really are saying that rap is an art form, then we got to be more responsible for our lyrics. If you see everybody dying because of what you are saying, it don’t matter that you didn’t make them die. It just matters that you didn’t save them.”

“Even the genius asks questions.”

“That which does not kill me can only make me stronger. I don’t see why everybody feel as though that they gotta tell me how to live my life.”

“Forgive but don’t forget, girl keep your head up. And when he tells you you ain’t nothing, don’t believe him. And if he can’t learn to love you, you should leave him.”

“Can’t close my eyes cause all I see is terror. I hate the man in the mirror cause his reflection makes the pain turn realer.”

“If I was white, I would be like John Wayne. I feel like a tragic hero in a Shakespeare play. Somebody who pulled himself up by his bootstraps, from poverty.”

“Behind every sweet smile, there is a bitter sadness that no one can see and feel.”

“I said, I’m gonna write a song about the women like my mom, women like my sister, who I think represent the strong black women, and I did that. Now I’mma write about the women I see everyday and that was ‘[I] Get Around.’ If I just write songs like ‘Keep Ya Head Up’ it would make me seem more than what I am, but I’m just a normal man.”

“Why can’t [the President] take some of those people off the street and put them in his White House? Then he’ll have people from the street to help him with his ideas. They haven’t been homeless forever; they’ve done things for society.”

“I want to grow. I want to be better. You grow. We all grow. We’re made to grow. You either evolve or you disappear.”

“Until it happened, I really did believe that no Black person would ever shoot me. I believed that I didn’t have to fear my own community, You know, I was like I represent them. I’m their ambassador to the world, they will never do me wrong.”

“You can spend minutes, hours, days, weeks, or months over-analyzing a situation; trying to put the pieces together, justifying what could’ve, would’ve happened…or you can just leave the pieces on the floor and move the f*** on.”

“Never surrender, it’s all about the faith you got; don’t ever stop, just push it ‘till you hit the top and if you drop, at least you know you gave your all to be true to you, that way you can never fail.”

“I feel like Black Jesus got his hands on me and guides me through life to put me where I’m supposed to be.”

“You can never “just be friends” with someone you fall in love with.”

“Follow your heart, but take your brain with you.”