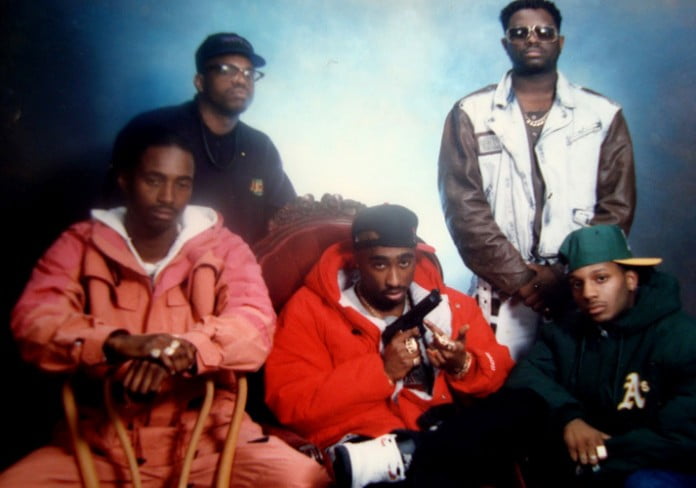 Tupac pleads innocent to charges in his April 29, 1994 arrest in Hollywood.

On April 29, 1994, Tupac and his step-brother Mopreme was arrested after police found a loaded 9-millimeter pistol and less than half a gram of marijuana.

Tupac was jailed overnight and released Saturday on $1,000 bail.

LOS ANGELES, May 11 — Rapper Tupac Shakur pleaded innocent Wednesday to two felony counts of being a felon in possession of a gun.

Shakur, 22, is out on bail in connection with a New York sexual battery case and is accused of shooting at police officers in Atlanta. He was arrested Tuesday in Los Angeles when he surrendered to serve a 15-day jail sentence for an unrelated misdemeanor battery case.

The rapper, who was handcuffed, appeared in court in a blue jail jumpsuit. His attorney entered an innocent plea on his behalf to one felony count of being an ex-convict in possession of a gun and carrying a concealed weapon.

During the arraignment, Shakur’s attorney, La’Chelle Woodert, requested that Shakur get a vegetarian diet while in jail. The judge took the matter under consideration.

The gun charges, the latest in a rash of criminal accusations made against the rapper, stem from his arrest April 29 with Maurice Harding, 26, after the two men were stopped by police on a Hollywood street. Police said the car they were in was traveling at 45 mph in a 25 mph zone.

Harding, convicted in 1991 in Oakland of carrying a concealed gun, is accused of being a convict with a concealed weapon in a vehicle. His bail was set at $20,000.

Shakur, convicted last year of carrying a concealed weapon, is awaiting trial in New York for an alleged sexual attack on a fan in a hotel room and in Atlanta for shooting two police officers.