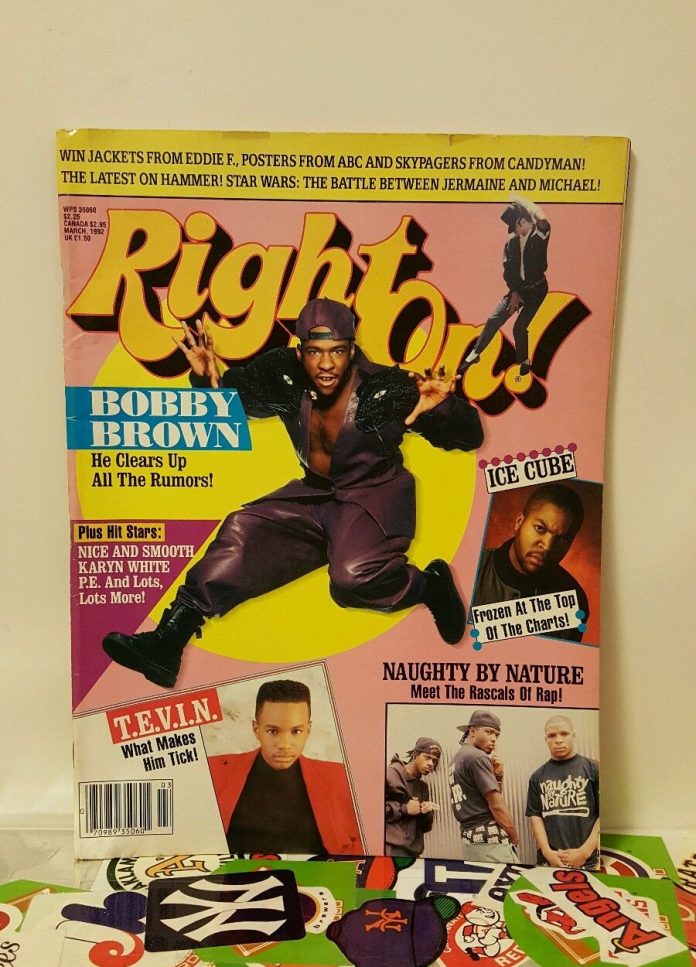 TUPAC: I like these interviews so far. They’ve been doing good.

RIGHT ON!: You’ve been doing a lot lately, right?

TUPAC: Yeah, between Juice and this album it’s been kind of hectic. I’ve been doing Digital Underground too.

RIGHT ON!: It’s been good hectic.

RIGHT ON!: Let’s talk about how you got the role for Juice. How’d you come to Ernest Dickerson’s attention?

TUPAC: I walked in the office where they were auditioning that day … truly coincidental, with a friend of mine, Money P from Digital Underground, and I saw everybody else reading and they thought I was Treach from Naughty By Nature. And they was like, yeah, yeah, Treach, we want you to read. I was like, my name is Tupac. I’m from Oakland. They were like, “whatever, just read.”

RIGHT ON!: So they figured your look would work for what they were trying to do?

TUPAC: Yeah, because when I walked in I had on all black, you know, the whole Raiders took, or whatever. That’s not how I dress, but just that one day I had it on, and they just went with it.

RIGHT ON!: So you only had to audition that one time, and that was it?

TUPAC: I auditioned like twenty times. They kept flying me back.

RIGHT ON!: Since the movie came out, do you think a lot of people have been surprised by your role and your portrayal of it? Because a lot of them probably didn’t know that you studied a little bit of acting in school.

TUPAC: Yeah, I’m getting a little more attention. People who met me before … now they double meet me … you know what I’m saying. But, yeah, a lot of people are surprised. That surprises me, but it’s cool.

RIGHT ON!: Did you surprise yourself, though, when you saw the film?

RIGHT ON!: A lot of people have gone to see it. And then they’ve got the posters all over the place.

RIGHT ON!: Do you think you’d like to do some more acting?

RIGHT ON!: The same type of role, or does it matter?

TUPAC: Different roles … got to be different. I’ll never do another role like that again, unless there’s a sequel.

RIGHT ON!: When you got on the set of the film, was it similar to what you thought it would be?

TUPAC: No. It was worse. I thought that … you know, it was better, I mean in some ways. and worse in other ways.

RIGHT ON!: Worse because of the long hours?

RIGHT ON!: I came out there one day when they were shooting the club scene … the DJ thing … and I was there for like six hours.

RIGHT ON!: But it worked out, though. Let me ask you this … the whole thing with the ad and the company deciding to take the gun out. How do you feel about that.

Tupac states his beliefs in every man’s right to carry a gun; yet, making this his way of life sadly led to his violent death.

RIGHT ON!: When it was originally shot for the photo there was a gun in it, and then they air-brushed it out or whatever?

RIGHT ON!: How did Ernest feel about it?

TUPAC: He kind of foresaw it happening like this, but he didn’t trip too much.

RIGHT ON!: They probably figured it was some other things that were happening in the past that they do it that way. ‘Cause it’s kind of tough, ’cause you can’t always judge one incident by the other.

TUPAC: Yeah, like they try to show it. So, if we would have rushed it and just turned out a movie we would have probably got some more attention. But since we came back after the other Black movies … which is as a whole … it’s just wrong … you know what I’m saying.

RIGHT ON!: What’s like the oddest thing that’s happened since you’ve done the movie as far as fans?

TUPAC: I got to be with this 31-year-old married woman. That was just too much for me! Too much. Everything else I was willing to deal with, and could deal with. But I didn’t know that this rap business and all of this and this movie stuff would reach that age group. That was just weird.

RIGHT ON!: So, she was ready to leave her family, or this was just a little side thing?

TUPAC: No she’s not ready to leave of nothing. She was just sowing her oats, too, I guess.

RIGHT ON!: But you’re twenty-one?

RIGHT ON!: You come across a little older than that though. So that probably part of it too.

RIGHT ON!: I met this young man that played “Q” and he seemed a little older than he is too…just from talking to him. So it’s good to find young Black men that are mature.

See Also  Exclusive: One From The Best Tupacs Friend, Desiree Smith Talk About Him [Interview] [Part 2]

RIGHT ON!: Let’s go back a little but when you were in Baltimore and you decided to come back to Cali? What made you decide?

TUPAC: No money. My mom was into drugs. I didn’t have any loot. I was poor. My mother had just had a miscarriage. I had to get up out of there to survive.

RIGHT ON!: Did you know anybody out there?

TUPAC: Cali. I knew one person. My Godfather’s wife. My Godfather’s Geronimo Pratt. He’s in jail, but his wife was out. So I just went out and stayed with her for a little bit until I was released from her house and had to find a new spot.

RIGHT ON!: So that was like a rough time?

RIGHT ON!: And then hooking up with Digital Underground.

TUPAC: … Was like my salvation. Shock G, they drove the shuttle. I was in the city. A train came off the ground-said all aboard. I got on the train and this is where I ended up. And I’m still riding the train.

RIGHT ON!: You’re doing your solo thing, but are you still a part of the group?

TUPAC: Still, very much part of that train. I just get my own car now.

RIGHT ON!: So you may go back and record with them too?

TUPAC: I did. l’m still very much a part of the group.

RIGHT ON!: Let’s talk about the album. Tell me about the direction of it?

TUPAC: I wanted it to be true … I wanted it to be something for young Black males to listen to, not as a fad thing; not just like an America’s most wanted type thing. I didn’t want to be on the bandwagon, but I didn’t say nothing. You know what I’m saying. I felt like I had things to say to my fellow niggas and I didn’t say it, And I had to say it, so this is what I did; a young Black mate, tapped, soldier story. I wanted them to know I’m one of them right away, and I understand their problems right away.

RIGHT ON!: Tell us a little bit of the story behind it.

TUPAC: Trapped is the true story just talking about how young Black males get caught up in the stereotype where we can never escape this vicious 360 degree deadly circle. It doesn’t give any answers. It just tells us that we are trapped. It’s just like a little anthem.

RIGHT ON!: You wrote all the lyrics?

TUPAC: With “Trapped,” somebody wrote along with me. ‘Mat’s the only one I ever wrote with somebody else. But besides that I write everything else.

RIGHT ON!: Do you know what the next thing’s gonna be?

RIGHT ON!: What other projects have you got coming up?

RIGHT ON!: She’s gonna be political or somewhere in between?

RIGHT ON!: Is she signed to the same label that you are?

TUPAC: No. I’ve come up with some kids: Gold, who are speaking up to the future of the young Black male, speaking up about what we need to do and what we’ve already done.

RIGHT ON!: So you’ve got your own production company?

RIGHT ON!: So, you’re busy on all fronts.

RIGHT ON!.. Is there one that you like more than the other?

TUPAC: Well, right now I love them all the same, ’cause we’re all family, but right now I’m very interested in Mister, because that’s very important for us as men to have our women next to us. And the other one … my favorite is Underground Railroad … the group … that’s my brother and this guy, Mouse. They’re about to come out strong. They got the best music.

RIGHT ON!: I’m sure y Ive done a lot of traveling. Do you have a favorite city to hang out in or perform in?

TUPAC: Besides my hometown, Oakland, I love New York; because that’s my other hometown.

RIGHT ON! : We have a lot of young readers. Do you have a message for young men who are either trying to get in the business, or just a message to them in general?

TUPAC: We don’t need a thousand rappers. We need 500 rappers and 500 brain people, like scientists and mathematicians. Everybody can’t perform. That’s one thing.

Number two, I’m not gontia “just say no,” and all of that. I want you to experience life as it is. Totally live to the fullest, but learn from your mistakes and learn from the mistakes of other people. You know what I’m saying, make your own decisions. ‘Cause just the simple fact of somebody telling you “just say no” is somebody making the decision for you. You make your own decisions. Live your own life. If you want to be a crackhead, and if you want to give up your whole life, it’s on you. If you want to be great, and you want to accomplish things, it’s on you.

RIGHT ON!: Tell me about you. How would you describe yourself?

TUPAC: I’m a Gemini. I have the two sides, I have the very loud, hard-core, brittle side and I have the poet, the introverted, calm, quiet type. So, I think that Tupac is a soldier, S-O-U-L-J-A. I fight from my soul, from my heart. I’m a fighter to the end. I’ve had to be.

RIGHT ON!: You made the best of your situation.

TUPAC: I sure tried.