This album of demo mixdowns, early alternate mixes. some unheard intro/outro and some adlibs.

The album was completed in a total of 7 days. The lyrics were written and recorded in only three days and mixing took an additional four days. The album was originally slated for a March 1997 release, but due to Tupac’s death, Suge Knight released it 4 months earlier (The same day as the Proposition 209 law that Tupac, Suge etc were fighting against got approved and passed in to law, Nov. 5)

Pictured below is the original back cover art to the album, Featuring [From left to right] The Notorious B.I.G., Puff Daddy and Dr. Dre. The [Back] cover was scrapped once Tupac passed. 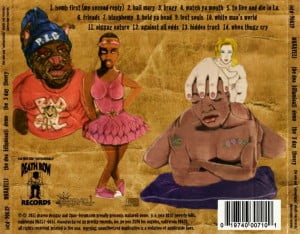 1. Bomb First (OG Version) Full Outro
The track is a minute shorter than the other version. Why? No intro, but full outro. This automatically makes this version better. There is also a quicker and slightly different outro. Other than that, everything else is exactly the same.

2. Hail Mary (OG Version)
The bass is slightly stronger and beat just sounds less polished/mastered than the other one. Outro is also slightly different. Everything else is exactly the same.

3. Krazy (OG Version)
The intro is very different, it sounds a lot like the intro used for „Toss It Up“ on the other release. The beat is also noticeably different (drum pattern is different and too loud, it doesn’t fit the track very well, beat isn’t as polished as the other one and different melodies used on the beat). Outro is also different. Extra adlibs, and the guitar strum is louder.

4. Watch Ya Mouth
This diss song obviously didn’t make the other release. Very good diss track though, nice and mellow beat but he goes hard on it and attacks many east coast artists. As for the track itself, the intro uses the same intro used for „To Live & Die in L.A.“ and the beat is also not polished.

5. To Live & Die in L.A. (OG Version)
Intro is different than the other one, that’s obvious right from the start. Beat is also slightly different, it doesn’t have the guitar during the hook in the background like the other does. Everything else is exactly the same, as far as I heard.

6. Friends
Another track that didn’t appear on the other release. This track has a remix that is well known within his fanbase, called „Fuck Friendz“. Well, this is the original version. The beat is very different than the remixed version, and it is also not polished. Intro is also different, and so is the hook. For the record, I like the remixed one better.

7. Blasphemy (OG Version)
Ah, my favourite track off the album. I’ve been waiting to hear this one. Anyway, the intro uses the same sample, but is clearer than the other one. The beat also sounds not as polished as the other one, but it’s not very noticeable unless you really pay attention to it. Everything else sounds exactly the same. No rattle snake sound effect on 3rd verse

8. Hold Ya Head (OG Version)
The only difference I see here is the beat doesn’t sound as polished as the other one. That’s it.

9. Lost Souls (Alternate Version)
I haven’t even heard the original version so I can’t compare them. All I know is that this track did not make the other release, and that it’s an enjoyable track but doesn’t belong on the album, as the beat is too upbeat for the rest of the album. I also realize that „To Live & Die in L.A.“ is upbeat, but it still feels like it belongs on the album.

10. White Man’z World (OG Version)
The intro almost identical, but is cleaner on this one and just slightly different. The beat is also very similar but slightly different, in the way that it is slower, has slightly different melodies and is not as polished. The other version is better, but something about this one is kinda creepy and haunting…  The outro has muted when start 2Pac.

12. Niggaz Nature
Yet another track that did not make the other release that also sounds upbeat but less than „Lost Souls“. Very nice track, but I don’t know if it belongs on the album. And I don’t know why but it sounds familiar, even though I know that I’ve never heard it before. Might be the sample/s used here (which, I believe by listening to it, samples Michael Jackson’s „Human Nature“).

13. Against All Odds (OG Version)
Slightly different intro and outro used here, and the bassline is also slightly different (might be the same but sounds different to me, because the beat also isn’t as polished, which makes the bass stronger). Everything else is exactly the same.

This review is based on a comparison between The 3 Day Theory and The 7 Day Theory!

In honor of the makaveli demo leak here is a full breakdown. 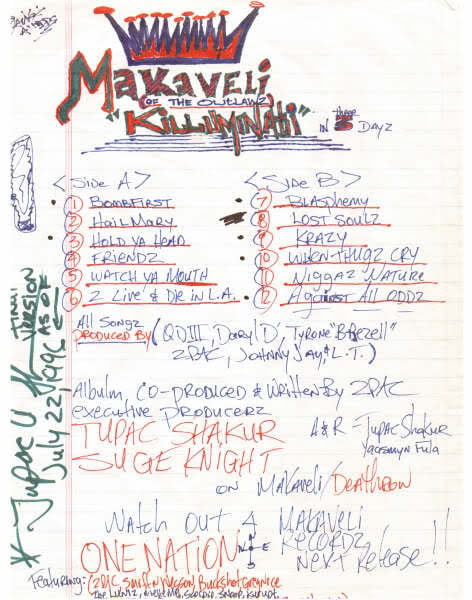 Original/leftover/scrapped tracks for The 7 Day Theory:

2Pac – When We Ride On Our Enemies (Alternate OG)

2PacLegacy - Modified date: April 13, 2021 0
Members of DMX’s family have warned that the rumors of them raising money for the funeral of the fallen legend are completely off the...