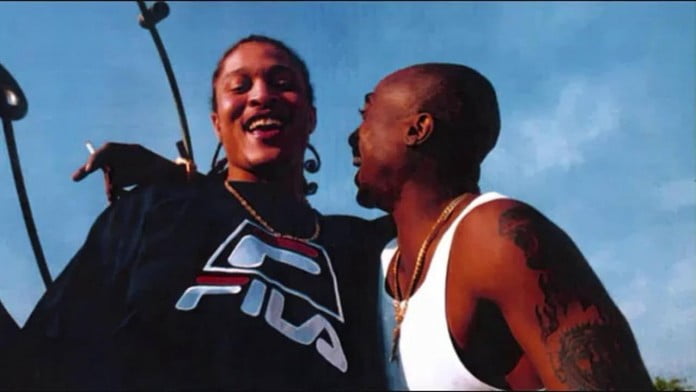 Once known as Young Hollywood, Killer Kadafi, Tha Prince (real name: Yafeu Akiyele Fula aka Yaki Kadafi), Yafeu Fula was born in New Jersey on October 9th 1977. Born proud, he stood strong and defiant in his brief life to forces less honorable. His parents, Yaasmyn Fula and Sekou Odinga were already active in the community and committed to social justice, truth and peace in America at a time of great world upheaval.

Named after African proverbs – Yafeu – “bold” and the middle name Akiyele – “valor enters the house” were chosen because we knew he was destined to greatness. During his brief lifetime he was indeed a very bold and courageous young man exhibiting strong leadership qualities and bravery at an early age.

Many factors contributed to Yafeus’ great destiny. In order to understand this young man and honor him properly it is imperative that his lineage is understood. For these were the loins from whence he sprung, these were the bearers of the torch that he inherited.

A direct descendant of a very well respected family in New Jersey on his mothers side – the Harrison-Martin clan. His great grandmother, Delia Harrison Martin was well known in New Jersey for her relentless pursuit and representation of human rights for all people. She began her legacy in 1920 working with the Newark Urban League under Bill Ashby. From there she allied herself to all political issues of the day that affected the lives and dignity of black people from the Womens’ Suffrage Movement, voter registration during the civil rights movement, community affairs, consumer rights, NAACP secretary, health advocate, and education for all. During her 100 years of living she received many awards and was responsible for drafting local government proclamations that directly benefited the black community.

The role Yafeus’ parents were playing in shaping the destiny of America vicariously shaped his life. His father, Sekou Odinga, a proud revolutionary activist was Section Leader of the Black Panther Party in the Bronx as well as other politically strong groups of the time such as Malcolm X’s Organization of African American Unity (OAAU). The goal was at that time and still remains self-determination, independence and freedom for the descendants of African slaves presently residing in the Americas. During the FBI’s attack of the Panthers under the leadership of J. Edgar Hoover and President Nixon, COINTELPRO targeted and devised plots to destroy the Black Panther Party and their supporters. Many Panthers and activists were forced to flee for their lives to avoid being set up, many went underground. Some, like Sekou fled the country to Algeria and became part of the International Section of the Black Panther Party in collaboration with then exiled leader Eldridge Cleaver.

At that time the East Coast and West Coast Panther Party were being manipulated by the powers that be to engage in destructive attacks upon each other. Today as in those days the media has exacerbated and contrived the East Coast – West Coast hip hop rivalry. The deaths and antagonisms are darkly familiar to those of us who survived the destruction and neutralization of the revolutionary movement by the FBI COINTELPRO program. Some, like Fred Hampton, Zayd Shakur, Bunchy Carter, Malcolm X, George and Jonathan Jackson, Lumumba Shakur, did not survive the conspiracy to eliminate the leadership of the Black Movement. Those who are not dead are either incarcerated or live to tell the story of their deceased sons and daughters – victims of this modern day holocaust.

Sekou Odinga is incarcerated in the Marion Federal Correctional Institution, Marion, Illinois for the past 23 years. After being convicted in 1985 at the Brinks trial held in New York, Sekou claimed political prisoner status and was promptly convicted of being a member of the Black Liberation Army and freeing Assata Shakur from jail. He is doing 60 years to life. Recognized the world over as a progressive revolutionary brother, Sekou claims that the United States has no jurisdiction over him during his trials and that he was persecuted and convicted because of his political views and positions.

The Shakur and Fula families forged a strong bond during the Panther 21 trial in 1969 and ensuing community organizing that has sustained us throughout many dark days. At that time, Afeni, Tupacs’ mom along with Yafeus’ father, Sekou, section leader for the Bronx Black Panther Party had been charged as Black Panthers with all kinds of ridiculous crimes. Afeni, pregnant with Tupac represented herself in court. Sekou, hoped on a plane and fled to Algiers and was tried in absentia. In April 1971 all were found not guilty. It was the longest trial in the history of New York and a pivotal period in all our lives. The friendship and comradeship extended beyond our political commitments. Our children, Tupac, Sekyiwa, and her sister Glorias’ son, Katari (Kastro) have been in each others lives since they were babies.

In October 1981, Yaasmyn, Yafeus’ mom was subpoened to a Grand Jury that was convened after the Brinks Bank Robbery in Nyack New York in which many activists from the communities, the Weather Underground and the Black Liberation Army were arrested. Anyone involved in community work, health, education, were rounded up and subpoened to give testimony about their co-workers. The RICCO statute which was formerly used against organized crime was now being used for the first time against politically activists and community organizers. The Grand Jury was convened in secret using its powers to subpoena and harass all activists. Yaasmyn refused to testify against her co-workers and was sent to jail for 18 months. Yafeu was 4 years old at the time. During part of the 18 months he spent with Tupac and his family, but for the most part he was taken care of by his grandmother, Vivian Smith. His father was also arrested in October 1981. Yafeu never saw his father again, only speaking to him briefly over the years from jail.

Yafeu attended elementary school at Washington Elementary School in East Orange, New Jersey and then entered the school system in Montclair, New Jersey. Montclair, a well known progressive community known for its upscale neighborhoods and proximity to New York was a segregated town. The upper class resided in Upper Montclair and the middle and lower classes resided in just plain Montclair. The institutions of Montclair – both culturally and educationally were designed to maintain the status quo and quick to identify all who questioned/threatened the sanctimonious myths of prosperity. Yafeu was the consummate ‘Rebel with a Cause’. Even as a youngster he would always take up for the kid being mistreated in the playground. His strong spirit and sense of right and wrong got him into trouble with the local authorities and school who were in many cases derelict in their professional duties and out to identify “troublemakers”.

Yafeus’ forumulative years were spent growing up in New York and New Jersey, Tupac his beloved brother by his side. Tupac always the teacher, the mentor, the instructor, the organizer, the soldier with the game plan – Yafeu the loyal comrade. Tupac always had his lil brother and his cousins by his side, especially when his career started zooming. They were there with him during the early days of Digital Underground, being groomed at very early ages to write lyrics, always growing and planning for future projects.

When Tupac was incarcerated in 1995 on the sexual assault charge, I remember driving Fatal (Hussein) to Clinton Prison in Dannemora to visit him. Fatal, a local rapper in Montclair, was talented and needed a break. I knew he possessed the skills, street edge needed to give the Outlawz the boost they needed in Pacs absence.

In the visiting room, I introduced Fatal, Pac said – “let me hear what you can do” – Fatal did an impromptu freestyle. Pac, though impressed, asked for more. Fatal happily obliged. Pac soon came up with Fatal and Felony (Yaki). This was Pacs fatherly way of allowing Yaki back into a group and still making good on his kicking Yaki out of the Outlawz. Pac in true Makavelian style ran the show. He was the breadwinner for his family. The decree of “the Prince” was that nobody left the “kingdom” while he was incarcerated. The infraction? Yaki dared to leave the compound in Atlanta (Tupacs home) and travel to NJ for a friends funeral. Yaki always had a mind of his own and encouraged to do so by me.

Despite Tupacs admonitions from jail not to leave, went anyway. Pac was more disappointed that his “son” had disobeyed him and vowed he would never be allowed back into the group. That all changed in September 1995, when Pac was released on bail and they together worked on and released All Eyez on Me. Their bond of love was an extraordinary one, throughout their entire lives. Tupac, besides myself, was the only constant Yaki had in his life. Tupac always teaching, Yaki always rebelling. I loved them both so dearly.

In 1995, Young Hollywood, Tupac, Bruce “Fatal” Washington, E.D.I., Kastro and Napoleon formed the group the Outlaw Immortalz, later changed to the Outlawz. Tupac gave each member of the group an alias from an enemy of America, he gave Young Hollywood the alias Kadafi after Lybian colonel Mu’ammar al-Qadhafi.

On June 14, Tupac’s “How Do U Want It” single was released. It featured “Hit ‘Em Up” featuring Kadafi, E.D.I. and Fatal. It’s the most notorious dis song in history and they’re dissing Bad Boy Entertainment, Chino XL, Junior M.A.F.I.A. and Mobb Deep on it. Tupac claimed he had sex with Bad Boy Entertainment recording artist The Notorious B.I.G.’s wife, Faith Evans, for betraying him. The video which was made for the song is the Outlawz’s first video.

Tupac planned to produce records for the group under his newly formed company, Euphanasia. Tupac hired Fula’s mother Yaasmyn to manage the L.A.-based company. Fula,just 19 years old, was a passenger in the Lexus along with fellow group member EDI (Malcolm Greenridge) driven by (Frank Alexander) that was directly behind Suge’s BMW when the shooting of Tupac occurred. Only Fula told police he might be able to pick out Tupac’s shooter from a photo lineup. He was the only witness that night who exhibited a willingness to help the police.

On the 10th November 1996 was shot once in the head and was found slumped in the third-floor hallway of an apartment building at 325 Mechanic St. early Sunday where he had been visiting a friend, Orange police said. Officers found Fula at 3:48 a.m. after receiving a report of a shooting.

Within two days of the murder, Orange police arrested & charged two teenagers. Yaasmyn Fula, one of Afeni Shakurs best friends, lost her only son in that shooting. Metro police lost their only willing witness to Tupac’s murder. Who killed Kadafi remained unknown to the public until September, 2000 when Napoleon revealed in an interview with The Source that it was his cousin, Roddy, who killed him. Roddy claimed it was an accident. Apparently they were both drunk and high and was playing with a gun, Roddy accidentally pulled the trigger and a bullet hit Kadafi in the head.