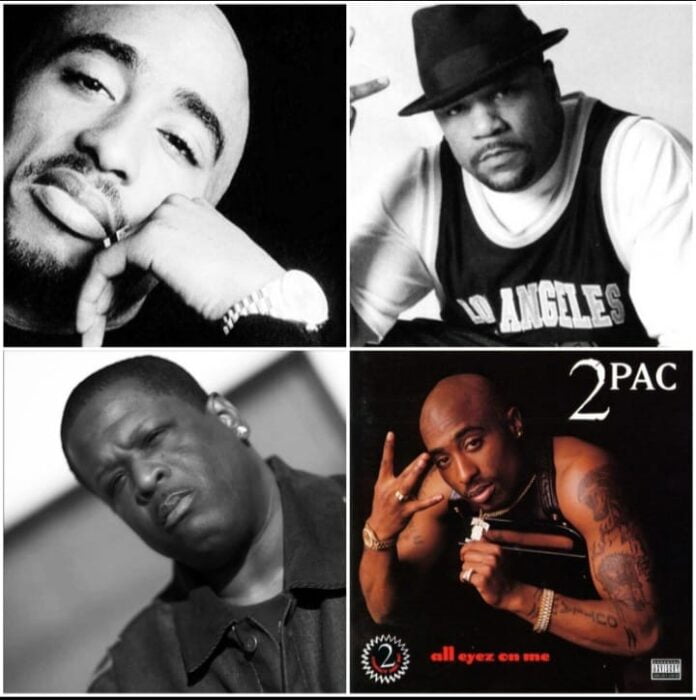 It was an actor in both films, Tupac Shakur, that would ultimately give CPO Boss Hogg has greatest sense of worth in a lengthy career. The pair had met in 1992, just days after the film Juice hit theaters. “We were sitting in a room and we were way in front of this ballroom,” recalls CPO, referring to he and his manager at a B.R.E. magazine event in Los Angeles, California. “It was dimly lit and we saw the door open up way at the other end. You could easily see from the hall light, that it was [Tupac]. He started walking in our direction, and we looked at each other and said, ;Does it look like he is walking towards us?’ So we moved to the left and when we moved he moved, he kept walking. Then we moved to the right and then he moved. I was like, ‘Aw, Hell nah.’ The he walked right up to us. Of course I knew who he was, but there is no way in the world Tupac knew who the hell CPO is. Wrong. He walked up and said what’s up. I said, ‘Congratulations on Juice,’ and he was like, ‘Cool, I appreciate it.’ We shook hands, a couple of hellos and then he went off.”

After CPO had signed to Death Row, the two crossed paths one day at the label’s studios. In 1994, while Tupac was hanging out with Snoop, Tha Dogg Pound and Nate Dogg, CPO passed through. “They were all sitting at the board. ‘Pac got up and walked over to me and hugged me,” recalls CPO. “He just walks over and gives me hospitable love. We don’t know each other like that; he has only met me one other time. So I thought that was super-cool. This is a humble cat, he is just really cool. He went back to what he was doing, but that had meant a lot to me. This dude doesn’t know me from Adam other than one other time we met for moments.”

CPO Discusses The Love Tupac Showed Him On “Picture Me Rollin'”

As the ’90s pressed on, Death Row Records expanded greatly. The label roster would boast artists such as R&B crooner Danny Boy, producer/emcee Sam Sneed, and eventually CPO’s former label-mate MC Hammer, along with Hit Squad member K-Solo. As the roster widened, CPO’s label correspondence and his paychecks halted. The rapper would take a job in reception at Martin Luther King Medical Center in L.A. to support his family. Several years removed from his multi-platinum soundtrack appearances, CPO learned that he was about to lose his day-job too. “I was really depressed because I knew I was going to get laid off. I was sitting there thinking to myself, I’m signed to Death Row [Records], the biggest record company out here and nothing is going on with me. I’m not doing videos,” recalled the rapper. Drinking away the pain with his friends in Compton, CPO admitted, “I just wanted to talk to somebody, anybody who is doing something, so I can feel like even if I’m not doing shit, I can talk to somebody who is. So I called the studio and [Death Row Records employee] Travis answered the phone and he said, ‘What’s up CPO?’ I said, ‘Who is in today?’ and he said. ”Pac,’ and I said ”Pac…Tupac?.'” CPO, like many, was shocked to learn that the incarcerated rapper was now not only a free man, but the latest acquisition on the Row roster. The session was following Tupac’s bail from Clinton Correctional Facility, orchestrated by Suge Knight and label lawyer David Kenner. CPO requested to speak to his friendly acquaintance.

When CPO and his friends arrived at Tarzana, California Can-Am Studios, they found Tupac Shakur and his Outlawz entrenched in a studio session with late producer Johnny J. Death Row provided the session with extensive liquor and marijuana, which CPO indulged. “We sit down and he sits down smoking about a thousand cigarettes back-to-back,” recalled CPO. “He is doing his thing and I start writing in my pad. So I get to this one part and I’m so blazed out of my head and I can’t think of anything right here. So I walked to him and said, ‘Listen, I’m going to say this and I want you to come in and say something, and then I’m going to come in after you. I don’t care what it is. ‘Cause I’m stuck right here.'”

He continued, “So we laid it and everything. We sat there and listened to it. He dropped the music on my part which I thought that was interesting. I was like, ‘That’s kind of cool, accenting my voice and everything.’ [My friends] asked if we’re going to use this song and I knew damn well they’re not going to use this shit. I was [thinking], ‘Isn’t this nice that they are doing all this for the fat guy?’ My boys were like, ‘Did you realize you just did a song with Tupac.’ I said, ‘Let me explain something to you, he is not going to use that song.’ The thing is what you do is you go in, you do a whole lot of songs and then you choose from the songs that you like, and then you put those on the album.” In 17-plus years of hindsight, CPO laughs. “Little did I know that every fucking song he was doing, he was going to use all of them.” There were a lot of things that surprised CPO of that day. “I didn’t know he was doing a 2CD thing. When [All Eyez On Me] came out, I didn’t think twice about it because for me that cat made my day just by inviting me to kick it at the session.

Nothing would surprised CPO more than we he took a closer look at Tupac’s best-selling studio album. His longtime manager, Michelle, was an employee at the label. She called him shortly before February 13, 1996 to tell him that the session, to be known as “Picture Me Rollin’,” resulted in the seventh song of the double-album’s second disc. Produced by Johnny J, the song also featured Danny Boy and Thug Life/The Outlawz’ Big Syke (l/k/a Mussolini). Cynical from half a decade of disenchantment in the music industry, at the time, CPO thought, “I’m not bullshitting when I tell you that I did not think anybody would like the song. There were too many other songs on there, you got songs with Dre, and you got songs with Snoop [Dogg]. There was too much bomb shit on there, why would they even hear this? But they did.” Although not a single, “Picture Me Rollin'” became a fan favorite, and a song epitomizing Tupac’s post-jail mindframe in the final year of the thug angel’s life.

For CPO Boss Hogg though, the story does not end there. While “Picture Me Rollin'” and its position on the five-times-platinum All Eyez concluded his Death Row Records catalog of appearances, the Compton vet appeared on albums such as The Eastidaz’ platinum self-titled debut, and the Bones soundtrack, two opportunities afforded by Snoop. However, although he was paid by his former label-mate, he still was on hard times at the turn of the millenium. “In 2000, I don’t know what the hell happened to my finances, but I was super-broke,” CPO admits. “I had left my job because I got hurt on the job. They were supposed to pay me workers [compensation], but it hadn’t come through.” While Suge Knight, CPO’s Compton homie was still incarcerated from a parole violation the night of Tupac’s fatal shooting, the rapper contacted his former label, who was approaching arrears after parting ways with Interscope Records’ distribution channel. “I was so fuckin’ broke that I decided to do the unthinkable, and call Death Row. I knew I was going to be told ‘hell no,’ but I decided to call Death Row and say, ‘I want to talk to somebody about the song I did with Tupac.'”

A Death Row employee instructed CPO to contact Universal Publishing, after Afeni Shakur severed ties with Death Row following Tupac’s 1996 death. CPO thought he might be getting the run-around from a label that had subsequently caused Snoop, Nate Dogg, and Kurupt to leave. “I called Universal,” Boss Hogg says, adding that his call was transferred through a number of departments. Finally, somebody asked his name and the song in question. “She said, ‘Well, we are only paying mechanicals,’ and I said, ‘Exactly what’s mechanicals?’ and she said, ‘It means you actually wrote something.'” Confirming he did in fact write, CPO said he was told he would receive a check in two weeks. After his tenures at Capitol and Death Row, the rapper admitted, “I knew there wasn’t no check coming.”

He was wrong. Although it took nearly three weeks, the low-funded CPO Boss Hogg checked his mailbox. “I got a letter in the mail from Universal, it looked like a check. I’m sitting there thinking what if it’s $1,500 that would be the shit right now—and then I’m thinking what if it’s $5,000,” recalls the artist. “Then I’m like, ‘Chill cuzz, it’s not $5,000, open the check and be happy with what you get.’ I open the check and it was a little over $37,000, and I was like “Whoa, I’m rich, bitch!”

“I still get paid for that song to this day,” CPO admits, emotionally. “Fate, that’s all I can say about how that came together.” In a career that’s included close ties to N.W.A., Snoop Dogg and Suge Knight, CPO touts, “‘Pac did more for me than anybody else.”

LisaRaye McCoy Credits Tupac’s Toss It Up Video For Her Start...