24 years later previously unseen photographs of Tupac Shakur in prison have been released to the public for the first time.

The mugshot photographs, which were provided by NYS Archives, show Tupac holding up a placard stating his height and weight. His height was 5″10 and he his weight stated he was 165 pounds.

282 pages of prison records and handwritten comments from Tupac and legal correspondence from different lawyers were preserved from his stay in prison 24 years ago. The records also show Tupac’s inmate number which was 95-A-1140.

Although a lot of information is included in the documents, New York State Archives were legally required to withhold portions of Tupac’s case. They did this under the provisions of the Correction Law sect 29.2 and NYCRR Title 7 sect. 5.23.

In one of the documents is a Statement Of Evidence for an incident that happened in July 1995 involving Tupac and a correctional officer.

The statement details how Tupac was accused of making threats to one particular officer. He was found guilty of 107.10 interference and 102.10 threats which were based on the officers written and verbal testimony. 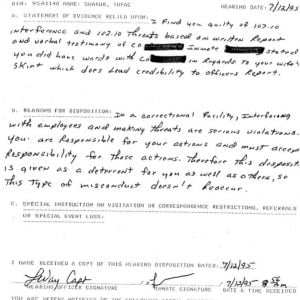 In another document ‘Pac is accused of being disruptive and abusive, refusing to calm down. In true ‘Pac style, he even called the officers assh****! 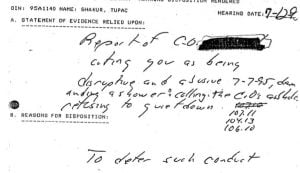 A state archivist added “Tupac Shakur happens to be a prominent person. There are many other people in our 30,000 inmate case files who are largely forgotten”.

It’s not the first time that Tupac’s prison items have been released to the public view. In 2018 his prison identification card and photo sold for $10,800 at an auction. Also that same year at an auction a letter he wrote to Madonna, while he was in prison, sold for more than $100,000.

‘Pac’s hand-drawn pornographic illustrations of himself having sex with his girlfriend Desiree Smith are being put up for auction at Dec. 24 in 2018.

2Pacalpyse Now Notebook up for Auction

When a Lie is Confirmed!!! 14-Year-Old Kim Kardashian Was Secretly in...