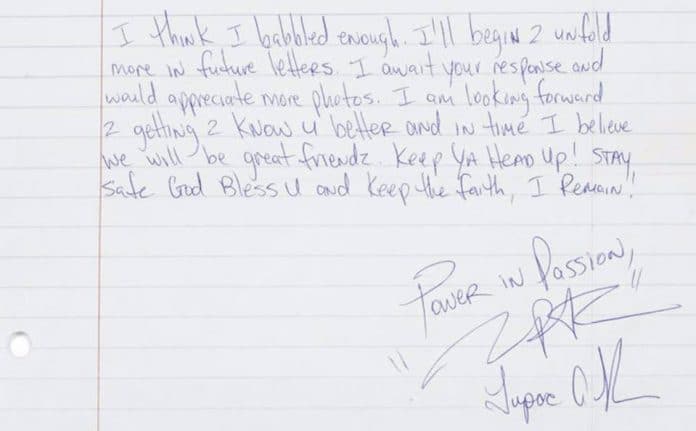 On August 21, 1995, Tupac corresponds from prison with a fan in England.

He writes: “I hope we can be friendz. I don’t have any friendz in England will u be the first. My next letter will be deeper and more in depth, but I need a picture 2 C who I am talking 2.” 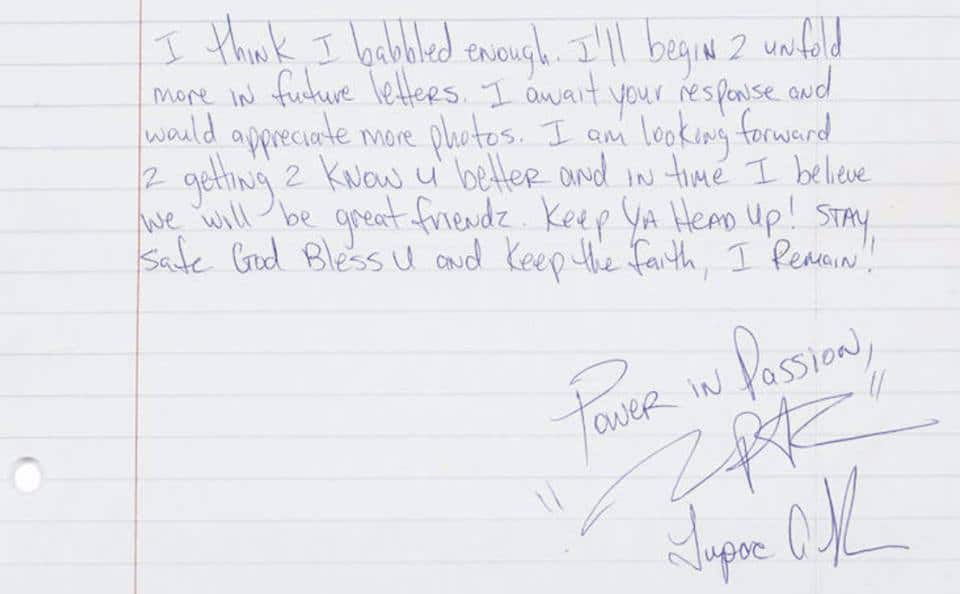 The second letter, dated September 11, 1995, is much longer and more detailed: “ I’m currently preparing 2 start my appeal 4 this unjust charge leveled against me so my faith is in God that all goes well …” Shakur answers many questions, including whether or not he has kids and why did his marriage fail: “My impulsive nature blinded me momentarily 2 vital character flaws in my ex wife, immaturity being the biggest, Jealousy being the worst.”
He describes his daily life in prison: “I am held at a maximum security Penitentiary, in fact one of the worst in this country. I have a 1 ½ to 4 ½ sentence and I’m surrounded by people with life or more. I have been kept in my cell 4 23 hours a day because I always argue and disobey the many rulez imposed upon me. I’m allowed to read and I work out in my closet sized cell but I am not allowed 2 touch the weights in the yard because of my status…. He also describes trying to get access to educational opportunities.

Most interestingly, he gives a detailed description of his musical tastes: “As for music my taste varies with my emotions. I am listening 2 Jamiroquai’s Space Cowboy. I like Sarah McLaughlin, Prince, Rap, Broadway Musicals, Sade, Dionne Farris, Counting Crows, Reggae, Eric Clapton, Sting, Aretha Franklin and it goes on and on … I’m currently writing my first screenplay called ‘Live 2 Tell.‘” In both 2005 and 2011, it was announced that Live 2 Tell, the story of a young man who rises to be a gang chieftain before going straight, was going into production, but as of yet, the film has not been released.