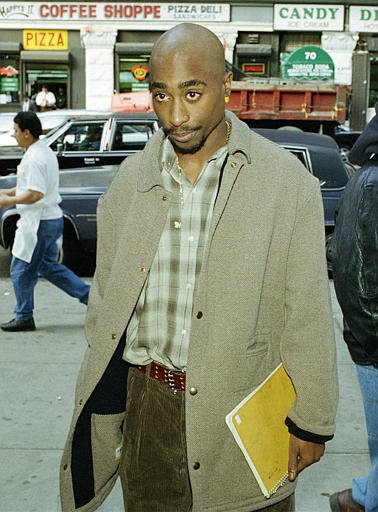 While serving time at the Clinton Correctional Facility in Dannemora, New York in 1995, Tupac wrote a movie script called “Live 2 Tell“. Tupac planned on playing the lead role, unfortunately the script was not made into a movie while Tupac was alive. / January 10, 1995

Tupac briefly mentioned his script in an interview with the Source Magazine, in March 1996, where he said:

“I wrote a screen play while I was in jail and that’s the style. Quentin Tarantino is the closest writer/director to our music. That’s what we do. See, he don’t mean no harm by showing violence as entertainment because its everywhere. Same thing we do. Were living in so much poverty and despair that by rapping about it, kinda making its seem like we controlling it, it makes us feel better about being here. And we gotta be here. We can’t escape like Bob Dole and Delores Tucker. She only gotta listen to the record and be mad for a few minutes, but the shit she’s mad at is the shit we living in. I know its bad, but we gotta make it look like its alright, because we living here.”

In 2011 the script was acquired by NStar Studios, who planned to put Live 2 Tell into production the following year. The estimated budget for the film would be around $11 million, a kickstarter campaign was launched for getting $250,000 in 30 days, which would be going towards development and some pre-production expenses, like attaching cast, legal fees associated with development and pre-production, hire a writer to “polish” up the script and ready it for principal photography, and more.

So the $250,000 was just to kickstart the process. According to the campaign page, the same group of people who were attached to the project before (Holmes and Juzang of NStar Studios, as well as Afeni Shakur, who’s listed as exec producer), were still very much involved.

The 30 days passed and the funding turned out to be unsuccessful, no news since then has been released.

What the script is about:

Live 2 Tell is not about Tupac, but it’s a story he wanted to tell and it is the only script Tupac wrote. Live 2 Tell is an emotional tale about the consequences of the choices we make.

It is the journey of a young man who goes from being a kid with a troubled home life looking for a way out, to a ruthless and successful drug dealer, to a man who begins to question his own actions and to look for ways to make amends.

At eight years old, it all went wrong for Scott. The suicide of his father and the family’s slow-motion disintegration helped propel him into the higher realms of organized crime. Young Scott is taken under the protective wing of one of the last gentlemen gangsters, Dee. He is being groomed for the top spot when Dee is ambushed and killed by the mysterious Nickedemus gang. Scott takes over, even though older hands feel he’s too inexperienced. However, Scott proves equal to the task and takes the business into legitimate and community-minded directions.

His big advantage over his contemporaries is that he can think his way through to a life past crime. After a while, Scott’s fellow cartel heads, one-by-one, start coming up murdered. Scott realizes that it is only a matter of time before Nickedemus reappears and the blood will start flowing. He makes a decision to get out of the game, reconcile with his family and escape to a new life with his school-years sweetheart, Carla.

Events overtake him and Scott is forced to deal with the consequences of his life as a major drug dealer. Scott makes it through to the other side, but not before he sheds his share of blood, toil and pain.

Afeni Shakur – Executive Producer
Afeni Shakur has said to NStar producers that Live 2 Tell is one of the most important pieces of Tupac’s legacy.

Preston Holmes – Producer
Preston Holmes has been a successful and respected producer of urban films for over 40 years, having been instrumental in the production of several of the most memorable urban films including – Krush Groove, New Jack City, Juice, Posse, Panther, Gridlock’d and Hustle & Flow. While serving as president of Russell Simmons’ DEF Pictures, Preston corresponded with Tupac in prison, which led to Tupac’s participation in the DEF Pictures release Gridlock’d. Tupac also sent the screenplay for Live 2 Tell to Preston.

Dwight Williams – Producer
Williams and Holmes have worked together frequently over the years on films such as Krush Groove, New Jack City and Hustle & Flow. Dwight also produced the film Baby Boy with John Singleton.

Ivan Juzang – Executive Producer
Ivan is the founder of MEE Productions inc., a Philadelphia-based advertising and marketing firm that has developed and perfected a unique method of reading and reaching the core urban youth market for many major corporations, and the public health arena. Over the past 20 years, Ivan has researched, developed marketing strategies and conducted community outreach for over 70 films for most of the major US Hollywood studios.

You can read all about the plans and the script itself. It’s worth checking out, you can read it by clicking here.