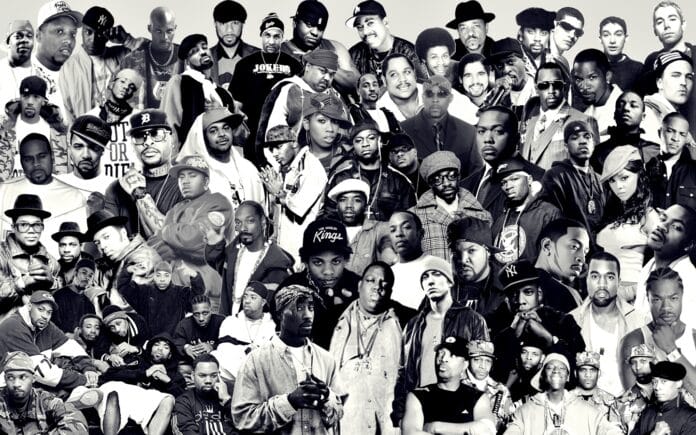 Hip Hop has come a long way since its main inception around the 1970s. Mainly credited to starting in New York City by a diverse group of cultures, Hip Hop was known for its rhythmic beats made by DJs and its creative lyrics characterized as rapping.

But since the 1970s, Hip Hop has evolved into many subcultures taking creative turns every which way. Old-school hip hop is a far cry from new-school hip hop, which is still different from rapping, trap, and gangsta rap.

Why is it important to differentiate hip-hop subcultures? Because music, particularly hip hop, has a deep history with those who create the music. Let’s take a deeper look at these subgenres and their impact on today’s hip-hop industry.

Afrika Bambaataa, a community leader from South Bronx, was the first to coin the term Hip Hop. From the 1970s to 1985, Hip Hop was in its old-school era, where DJs would use turntables to manipulate music and break the loop. This was simultaneously paired with MCs rapping on the spot.

But known as the original founding fathers of Hip Hop is one other than DJ Kool Hrev and Coke La Rock, who banded together in 1973. Six years later, in 1979, “Rappers Delight ” would be recognized as one of the most famous rap songs in the world, even to this day.

The importance of this era was instrumental in giving a voice to the socio economic issues African Americans and other minorities were facing on a daily basis.

The Golden Era or Gangsta Rap Era would also emerge in the 1980s, with many lyrical references being about gang life and crime on the streets. It also was a time when technology had expanded, making music available across the country, pointing out vast differences in cultural styles.

With so much diversity and access across the country, Hip Hop was taking all sorts of creative directions and ultimately bleeding into the new school era and the divide between the West and East coast.

Once the 1990s came around, it was considered to be more of the new school era for Hip Hop. The difference was in the lyrics. They were harder-hitting, more complex, and at times hard to understand. For instance, within this subgenre of Hip Hop, there was mumble rap, rap metal, and rapcore.

The 1990s also saw one of the biggest rifts in music history carried out from the late 1980s as East Coast versus West Coast rap became a dominant hot topic.

Most notably between Tupac Shakur and The Notorious B.I.G., East Coast rap was more known to carry an aggressive style, while West Coast tends to be more laid back. Sadly, the rift grew so big that it led to the murders of both artists.

See Also  The 5 Best Music Conservatories in the World

The Second Half of The New School Era

This era eventually paved the way for new artists who were more notably a part of the New School Hip Hop Era. To name a few are Run DMC, L.L. Cool J, Beastie Boys, Public Enemy, and many more.

At this time, Hip Hop was becoming a movement loved by all cultures and was associated with particular fashions and even lingo. Funny enough, “Fo Shizzle” and “bling” were added to the Oxford Dictionary.

Let’s also not forget one notable thing from this era. R&B was closely related as notes of Jazz were incorporated with powerful female vocalists included on popular tracks. Jennifer Lopez and Aaliyah are two women that come to mind.

The Trap Era was also a part of the New School Hip Hop era but had a particular distinction from other genres.

Trap music came from very poor neighborhoods in Atlanta. Trap houses were houses used for the drug trade and, at the same time, were associated with this type of rap subgenre.

Again, along with gangsta rap in the 1990s, this type of music highlighted the poverty culture many Americans wouldn’t understand.

Aside from the notable Eminem and a few others, Hip Hop is a genre of music and dance that has long been associated with Black culture and the culture of minorities.

Hip Hop gave a voice to a large portion of America that was unheard and unseen. While poverty among these cultures still exists today, the music we have all come to know and love has exposed these issues and given some economic power back to these communities.

We often see rappers such as Kanye West have close ties to their original communities to give back and help with socioeconomic issues.

Big Sean also gives back through his foundation to support his communities in Detroit. Countless other rappers do the same. However, to enjoy this genre, we must seek to understand the roots of its origination.

Hip Hop today has some similarities from its past but is ultimately completely different from its origination. Where it is the most similar is that there is no one style of Hip Hop.

Instead, it is as diverse as it was in its Golden Era when tracks were being sampled. This is all thanks to technology. Gangsta rap, Trap rap, and other styles still exist today. But many more types of Hip Hop have revolutionized since its inception in the 1970s.

Considering Hip Hop to be a melting pot is a beautiful thing which is why music from Tupac and The Notorious B.I.G. is still as popular today as Snoop Dog and Jay Z are. And there is room for new rappers like Kodak Black, Dababy, and 21 Savage.